Greenlight > Games > Cheritz's Workshop
Greenlight is being retired. For more information on how to submit games to steam, refer to this blog post.
This item has been removed from the community because it violates Steam Community & Content Guidelines. It is only visible to you. If you believe your item has been removed by mistake, please contact Steam Support.
This item is incompatible with Greenlight. Please see the instructions page for reasons why this item might not work within Greenlight.
Current visibility: Hidden
This item will only be visible to you, admins, and anyone marked as a creator.
Current visibility: Friends-only
This item will only be visible in searches to you, your friends, and admins.
Nameless ~The one thing you must recall~
Description Discussions0 Announcements2 Comments155 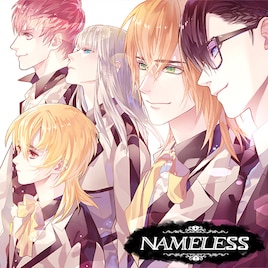 Cheritz
Offline
See all 39 collections (some may be hidden)

View Nameless ~The one thing you must recall~ in the store

Thank you and have fun!

Read More
Check out the Demo & take a look at our first game already on Steam!
October 7, 2014 - Cheritz

You can download the demo from the Nameless official website, http://nl.cheritz.com/en.
You may also purchase the full version of game from our market if you enjoy the demo, http://shop.cheritz.com/en

Read More
Description
Release date: Nov 11th, 2013
Nameless ~The one thing you must recall~ is an Otome (female-oriented) game developed by Cheritz.
It was initially released on Nov, 2013 in Korean, English and Japanese through the official website.
"Dandelion", Cheritz's debut project, has been Greenlit and successfully released on Steam in 2014.
In Nameless, you will find even more amazing art work, music, voice acting and storyline from Dandelion.
Visit Nameless website for more information. {LINK REMOVED}http://nl.cheritz.com/en
(You can play Demo at {LINK REMOVED}http://nl.cheritz.com/en/download)

[Story]
"Eri", the main protagonist, is an ordinary-looking freshman who attends Crobi Academy.
With her parents working overseas, she is left all alone in her grandparents' house after her grandfather's death.
After being all by herself "Eri" grew close to her ball-jointed dolls. However, she cannot tell anyone about her hobby.

Nameless ~The one thing you must recall~ has been Greenlit and is now listed in the Steam store. For the latest information, purchase options, and discussions for Nameless ~The one thing you must recall~, please see it on the Steam Store or in the Steam Community.
Visit Store Page
For more details Visit Community Hub
For latest discussions
If you really, really want to, you can continue to the Greenlight page. Information on this page may be out of date, since all the action has moved to the areas noted above.