Greenlight > Games > Haedri's Workshop
Greenlight is being retired. For more information on how to submit games to steam, refer to this blog post.
This item has been removed from the community because it violates Steam Community & Content Guidelines. It is only visible to you. If you believe your item has been removed by mistake, please contact Steam Support.
This item is incompatible with Greenlight. Please see the instructions page for reasons why this item might not work within Greenlight.
Current visibility: Hidden
This item will only be visible to you, admins, and anyone marked as a creator.
Current visibility: Friends-only
This item will only be visible in searches to you, your friends, and admins.
Alien Blitz
Description Discussions0 Announcements1 Comments38 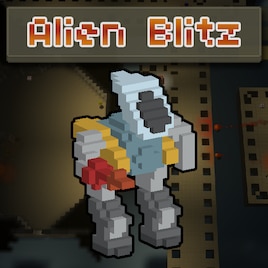 Haedri
Offline
See all 3 collections (some may be hidden)

View Alien Blitz in the store

I am very pleased to announce that Alien Blitz is now available on Steam thanks to you all ! (in early access)

Have fun, and thanks for supporting my game and helping it reach Steam
Read More
Description
Release date: Early 2015
Your island has been invaded by aliens during the night, take your shotgun, and kick them out!

Alien Blitz is a 3d action-shooter inspired by Doom with lots of bullets, weapons, maps and monsters.

You play a soldier resting on his native island, but it is quickly overrun by monsters from outer space and no outside help is available. You put on your mecha armor, take your shotgun and go to find out what happened at the peril of your life.

Features
Inspiration
Being huge fans of old doom games we tried to mimic some of their features such as:
And we also added lots of new features like experience, money, upgrades,…

Early access
The game is already feature complete, all episodes, maps, monsters and weapons are available and will be available day 1.
But the game will be an early access at least for a few weeks, just to make sure it runs well on all platforms (beta testing).

Q & A
> Is Linux/Mac/Windows supported?
Yes! All OS will be fully supported day 1.

> Is multiplayer supported?
Multiplayer is not supported and not planned. It might be added after release depending on demand, no promise though.

> Can I use a controller/keyboard/mouse?
The game can be played with either:

The controller can be used in the menus, making it Big Picture / Steam OS compatible.

> Is there a first person view?
Only as a small mod, for fun, not suitable for actual play (the game becomes too hard with all these bullets in FPS view)
< >
38 Comments

Alien Blitz has been Greenlit and is now listed in the Steam store. For the latest information, purchase options, and discussions for Alien Blitz, please see it on the Steam Store or in the Steam Community.
Visit Store Page
For more details Visit Community Hub
For latest discussions
If you really, really want to, you can continue to the Greenlight page. Information on this page may be out of date, since all the action has moved to the areas noted above.