Store Page
Sid Meier's Civilization V >  Workshop > framedarchitecture's Workshop
This item has been removed from the community because it violates Steam Community & Content Guidelines. It is only visible to you. If you believe your item has been removed by mistake, please contact Steam Support.
This item is incompatible with Sid Meier's Civilization V. Please see the instructions page for reasons why this item might not work within Sid Meier's Civilization V.
Current visibility: Hidden
This item will only be visible to you, admins, and anyone marked as a creator.
Current visibility: Friends-only
This item will only be visible in searches to you, your friends, and admins. 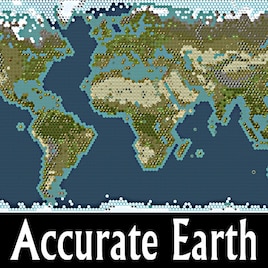 This item has been added to your Subscriptions. Some games will require you to relaunch them before the item will be downloaded.
In 1 collection by framedarchitecture
Accurate Maps

26 items
Description
Two huge World Scenarios with pre-placed Civs and resources. Founded and captured cities are automatically named based on their location.

Recommended mods are available in the above-linked collection, "Accurate Maps".

How to Load
Choose the either 'Accurate Earth I' or 'Accurate Earth II' (requires Babylon, Korea, Inca and Polynesia DLC!) in the setup screen (Screenshot #1)
Scenario If you want to play with the pre-placed Civs, tick the Load Scenario check box.
Normal Map Set up the game as you normally would. Cities will still be named based on their location.

For Modders
If you want to add dynamic city naming to your WorldBuilder scenario, you will find all the files you need in this mods' City Names folder.

Shapelesshorror Dec 30, 2021 @ 5:54pm
Hi framedarchitecture, do you have a write-up available anywhere of all the special rules and special civ traits/handicaps/events. I haven't been able to find a compilation anywhere. Thank you! The mod is great!

timseverino Dec 19, 2021 @ 12:22am
the game works great, but is there a way to turn off the city limits? I only got 120 turns in with Shonone and got bored, so much space and no ability to settle until the information era past only 4 cities?

framedarchitecture  [author] Sep 15, 2021 @ 2:10pm
Not sure why so many people have trouble setting up a game.....
1. Subscribe to this mod
2. Click MODS button on main screen, and ACCEPT
3. Click the ENABLE button to the right of "Accurate Earth (v.10)"
4. Click NEXT
5. Click SINGLE PLAYER
6. Click SET UP GAME
7. Click MAP TYPE
8. Scroll down and select either "Accurate Earth I" or "Accurate Earth II"
9.Under MAP TYPE tick the LOAD SCENARIO box
10. Select a Civilization
11. Select a Difficulty and a Game Pace
12. Click Start

I cannot break this down any further.....

Ricky.RIP Sep 6, 2021 @ 7:17am
I have ticked the scenario box and my civs spawn in the same inaccurate place every time

marstyk May 14, 2021 @ 1:40am
There is a bug I want to discuss. Even when I play on a random map and I don't choose this scenario (but I have it on in mods tab) the cities still can't be founded on the tiles you excluded. The AI never moves the first settler so half of the AI controlled civilizations never get to found their first city