Greenlight > Games > Blink Theory's Workshop
Greenlight is being retired. For more information on how to submit games to steam, refer to this blog post.
This item has been removed from the community because it violates Steam Community & Content Guidelines. It is only visible to you. If you believe your item has been removed by mistake, please contact Steam Support.
This item is incompatible with Greenlight. Please see the instructions page for reasons why this item might not work within Greenlight.
Current visibility: Hidden
This item will only be visible to you, admins, and anyone marked as a creator.
Current visibility: Friends-only
This item will only be visible in searches to you, your friends, and admins.
Alice in Tokyo Wonderland
Description Discussions0 Announcements1 Comments93 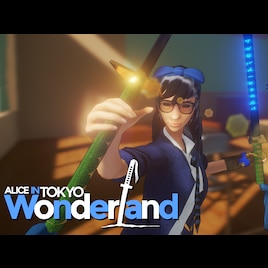 After taking a year to retool the game we're happy to show the Giant improvements made to Alice in Tokyo Wonderland. A new video is currently up and we've a Kickstarter going to improve the Sound and UI. Almost funded already! KS - https://www.kickstarter.com/projects/1228380556/alice-in-tokyo-wonderland-0
Anyways we'll update far more frequently from here until the release of the game later this year. Thanks.

Alice in Tokyo Wonderland is an Action-Adventure Hack n' Slash developed by just 2 people on the Unreal Engine 4 for PC, Mac, and Linux. You take control of Alice, a student in Tokyo, Japan who accidentally follows her rabbit into Wonderland. With the help of The Legendary Vorpal Blade and Fierce Ancient Magic you will traverse the Whimsical and Treacherous World of Tokyo Wonderland. But will that be enough to get out with Your Head still attached as you Unravel the Enthralling Story and try to Save Wonderland from the Evil Geisha Queen of Hearts?

Command the Variety Needed to Succeed!


* in a Place this Mad there’s no telling where it'll take you next...

A Journey full of Extraordinary Warriors!

Down the Rabbit hole we go....

Corvo Attano Sep 3, 2016 @ 4:12pm
Yes, I understand. I don't mean she's not beautiful Im mean about some more charming in visual stuff. Thanks for answer. )

Blink Theory  [author] Sep 3, 2016 @ 2:42pm
@Bowelwhistler
Not a problem. We've only textured her enough to not make her super boring but we are saving most Visual stuff to the end and focusing on solid gameplay and level design first. It's a dumb way of doing it because it makes for poor trailers and pictures (but allows more time for bug fixing and refinement which is why we chose to go this route). She she and everything else will look tons tons better by the time the game is out.

Blink Theory  [author] Jul 26, 2016 @ 7:54pm
@Zynthio
Later this year...should be Fall...Just got another enemy done and only 3 Levels to build left (which get built all together...hence saving it until the end as it's a lot at once but still only 3)....I'll update with video soon...problem is we haven't spent much time texturing things so cool new enemies but they look bland and that's no fun to share. I'll update soon though.....

Blink Theory  [author] Oct 17, 2015 @ 11:12pm
Lioside,
Zbrush and Maya....standards really but they get the job done...I use Quixel Suite to texture but I'm not positive I can recommend them over Substance as they haven't updated much since I bought them so verdict is still out on that program....Thanks for the vote....

Playmaker Oct 17, 2015 @ 8:07pm
voted and what did you use to make the characters? I'm trying to make my character into a 3D style he just a bit more complex than most characters.
< >