Store Page
Chivalry: Medieval Warfare >  Workshop > Oilystool's Workshop
This item has been removed from the community because it violates Steam Community & Content Guidelines. It is only visible to you. If you believe your item has been removed by mistake, please contact Steam Support.
This item is incompatible with Chivalry: Medieval Warfare. Please see the instructions page for reasons why this item might not work within Chivalry: Medieval Warfare.
Current visibility: Hidden
This item will only be visible to you, admins, and anyone marked as a creator.
Current visibility: Friends-only
This item will only be visible in searches to you, your friends, and admins.
Infidel's Bane
Description Discussions0 Comments109 Change Notes 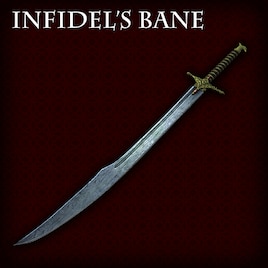 Oilystool
Offline
See all 100 collections created by Oilystool and other people (some may be hidden)
In 1 collection by Oilystool
Medieval weapons by Oilystool
22 items
Description
A Messer Weapon Skin.


"Forged in the arid lands of Arabia, this particular sword has felled many crusaders in its time. While to the untrained eye, the wavy,metallic patterns of the sword may be a mere curiosity, but to the warrior who has been on crusade, the sight of a Saracen wielding a sword forged with Damascus Steel,is a sight that inspires terror. A blade forged in Damascus steel is light and easy to swing, sturdy enough to halt the most grievous of blows and sharp enough through cut through plate,mail,cloth,bone and sinew. While this blade may no longer be, in the hands of a Saracen, it still lives up to its dreaded nickname " Infidel's Bane" by virtue of all the knights it still cuts down,with its elegant and dreadful blade. - Unknown knight"

So this is my second submission for the Polycount contest. As with my previous submission I did not want to stray into high fantasy when it comes to the design of the weapon. But I did wanted to submit something that is unique,deadly and fitting of the Chivalry Medieval Warfare setting. The idea behind this variation of the Messer, is of a 2 handed scimitar, once wielded by some terrible,Saracen warrior,who used to it kill many knights. Once the original wielder of the sword was killed in battle a knight brought it back with him from the holy land to use in battle. Many knights went to the holy land for spiritual salvation,but for plunder as riches as well,so this particularly exotic sword was taken as a spoil of war.


The blade is made of a material called "Damascus Steel", which is an ancient type of metal that was both incredibly sharp and flexible. The forging technique to this type of steel,just like Roman concrete has, been lost to time and has beguiled modern weapon smiths,in its particular technique it takes to replicate. The blade surface has a wavy and water like quality, unseen in its European counterparts.

So,in conclusion none of the elements which make up this sword,diverge from historical references and it is both Mason and Agatha nuetral.


If you like this weapon or the other I submitted,please vote it up and submit your remarks in the comments section.