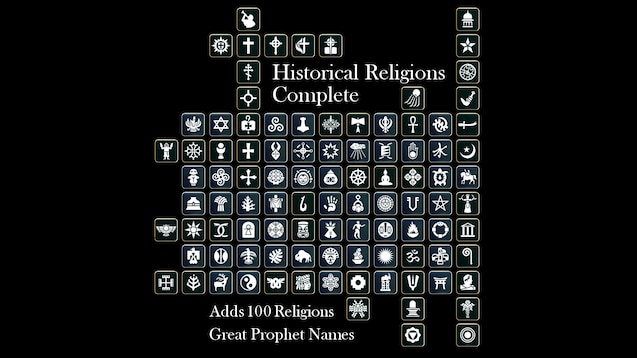 This item has been added to your Subscriptions. Some games will require you to relaunch them before the item will be downloaded.
In 1 collection by Tomatekh
Tomatekh's Historical Religion Mods

17 items
Description
This is a stand-alone edit of my Historical Religions mod (you do not need to use the main mod to use this version), which can be found here:

As I've released a number of denomination packs by this point, this mod combines the main Historical Religions mod and all the various denomination packs into a single download. I will still be making more packs and updating this mod as I do so (this pack is more for convenience than anything else). In total, it includes about 105 religions (14 default religions, 51 from Historical Religions, and 40 from religious denominations).

My Historical Religions Edit (BNW or GK) mod is still available, which only includes 13 new religions (limiting itself to the religions chosen by the official civs).

Additionally, as of v.10 this mod also includes my Great Prophet Historical Names mod. If you do not wish to use Great Prophet names, simply delete the entire "Great Prophet Names" folder from the mod folder (~/documents/my games/civ v/mods/historical religions complete).

This mod includes the following packs:

Additionally, the following religions are present in the complete version but have not yet been incorporated into the individual mods:

Note:
- This mod requires either the Brave New World or the Gods and Kings expansions.
- Updates to the mod will most likely break saved games. Do not update unless you are ready to start a new game.

Modders, please see this link[forums.civfanatics.com] for instructions on how to include internal support for this mod within your civilization mods.

makszik May 8 @ 6:44am
Hi, I found your mod and I fell in love with this! I see that there is no translations to other languages, do you want me maybe to do so?

Gerishnakov Oct 13, 2021 @ 7:04pm
I'm sure this may have been brought up before, but how come the links to the High American and Oceanic denomination packs are broken?

lord_ladrian Jan 11, 2021 @ 4:14pm
And when I disable this mod, those four religions remain available alongside the base religions, so I think the other two are coming from other mods as well (Akhenaten and Nri). So in effect, the bug is that all the religions from Historical Religions Complete have disappeared.

lord_ladrian Jan 11, 2021 @ 3:09pm
Having a very similar problem to Typh and 76561198088815991: I'm only being given the option to found Atenism, Odinani, and two religions from other mods - Mormonism (which I believe was renamed to Restorationism and renamed back by JFD's Deseret mod) and Bai Shangdi (which comes from PorkBean's Heavenly Kingdom)

moon.ulna Feb 4, 2020 @ 7:04am
I am also having a limited number of religions (Atenism and Odinani specifically).

Typh Dec 9, 2019 @ 9:04pm
Strange conflcit I have aI am trying to fix. I only am able to Choose One Icon and one icon alone that happens to be the Odinani icon. I have subscribed ot numbers custom Empires, most from the big modders. So I am at a loss here. hrm.
< >