Greenlight > Games > Leftiy's Workshop
Greenlight is being retired. For more information on how to submit games to steam, refer to this blog post.
This item has been removed from the community because it violates Steam Community & Content Guidelines. It is only visible to you. If you believe your item has been removed by mistake, please contact Steam Support.
This item is incompatible with Greenlight. Please see the instructions page for reasons why this item might not work within Greenlight.
Current visibility: Hidden
This item will only be visible to you, admins, and anyone marked as a creator.
Current visibility: Friends-only
This item will only be visible in searches to you, your friends, and admins.
Super Cyborg
Description Discussions4 Announcements2 Comments311 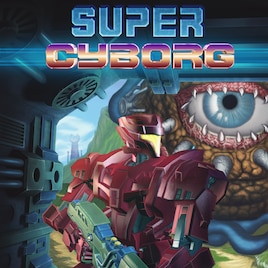 Leftiy
Offline
See all 42 collections (some may be hidden)

View Super Cyborg in the store

If you've bought the game on Desura, Indiegamestand or as part of a bundle, you'll get free Steam key. Send me your request on arturgamess@gmail.com

Hi everyone!
Super Cyborg will be released on July 8 ! And it features 35 achievements, leaderboard and Netplay mode (online coop)! Stay in touch!

Read More
Description
Release date: 8 Июля 2014 года
Super Cyborg is an oldschool nonstop hardcore run'n'gun action! You play as battle cyborg who was sent to investigate a mysterious island. A very powerful alien known as 'Xirxul life form' has been awakened by the scientists and now all humanity is in danger! Rush through 7 levels filled with countless monsters and creatures. Destroy everything that moves! 8-bit stylized pixelart graphics combined with awesome chiptune soundtrack creates a perfect atmosphere for the bio-sci-fi setting. Gameplay was inspired by many oldschool titles such as Contra series, Metroid series, Gunstar heroes, Alien soldier and many others.

Super Cyborg was in development for almost 4 years and finally released in July on Desura. It was warmly accepted by players and got high ratings and positive reviews from them. That's because everything was made with high passion and enthusiasm.The major part of our efforts went into level design, detailed pixel-art graphics and original chiptune music. My main goal was to create as detailed and dynamic experience as possible, hence we made an accent on unique enemies, boss fights featuring several “forms” and requiring you to learn their patterns, and unusual environments that make each of the 7 available levels refreshing and new to the player.

Do Indieroyale buyers get a steam key?
Shoppa

Super Cyborg has been Greenlit and is now listed in the Steam store. For the latest information, purchase options, and discussions for Super Cyborg, please see it on the Steam Store or in the Steam Community.
Visit Store Page
For more details Visit Community Hub
For latest discussions
If you really, really want to, you can continue to the Greenlight page. Information on this page may be out of date, since all the action has moved to the areas noted above.