Greenlight > Games > HandMade Game's Workshop
Greenlight is being retired. For more information on how to submit games to steam, refer to this blog post.
This item has been removed from the community because it violates Steam Community & Content Guidelines. It is only visible to you. If you believe your item has been removed by mistake, please contact Steam Support.
This item is incompatible with Greenlight. Please see the instructions page for reasons why this item might not work within Greenlight.
Current visibility: Hidden
This item will only be visible to you, admins, and anyone marked as a creator.
Current visibility: Friends-only
This item will only be visible in searches to you, your friends, and admins.
Rooms: The Unsolvable Puzzle
Description Discussions2 Announcements5 Comments377 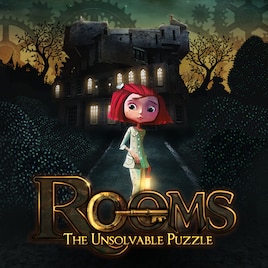 HandMade Game
Offline
See all 18 collections (some may be hidden)

View Rooms: The Unsolvable Puzzle in the store

Finally, Rooms is back!

Rooms: The Unsolvable Puzzle launches on PC, Mac, and Linux on 6 languages right now!
It was a long way coming back to where it should have started in the first place. For those who know the history of the game would get what that means. Despite all odds, we're very happy to bring it on Steam finally!

As a launch sale, we're taking 20% off from its regular price. Please check out Rooms2 store page for more detail.

We are also giving out 66% discount coupon for Rooms: The Main Building for those whom buy Rooms2, so don't miss the chance!

Stay tuned on the store page for updates :)

Read More
Description
Release date: Q1 2015
About the game
Rooms: The Unsolvable Puzzle is a unique puzzle game inspired by sliding puzzle mechanics and platform games. In a twisted mansion made of rooms that slide like sliding puzzle, player must find a way to the exit by sliding rooms and using what's inside them. As player explores the mansion, various gadgets are can be used make the tricky puzzles more interesting.

Set in a fairy tale-like world full of magical objects and spooky stories, player takes a role of an innocent little girl, Anne, who was accidentally trapped in the mansion. As the story unfolds itself, player goes through a dark legend of the twisted mansion.
The game features 144 levels which are divided into 4 themes (mansions). Each mansion has basement levels where Anne can use her special abilities like using a cellphone to teleport, placing a bomb, and moving all rooms at once.

Jazzy Waffles Mar 15, 2015 @ 10:20am
Nice job getting it Greenlit! Hope the trophies are also Achievements this time around. ;3

Rooms: The Unsolvable Puzzle has been Greenlit and is now listed in the Steam store. For the latest information, purchase options, and discussions for Rooms: The Unsolvable Puzzle, please see it on the Steam Store or in the Steam Community.
Visit Store Page
For more details Visit Community Hub
For latest discussions
If you really, really want to, you can continue to the Greenlight page. Information on this page may be out of date, since all the action has moved to the areas noted above.