Greenlight > Games > Sixo's Workshop
Greenlight is being retired. For more information on how to submit games to steam, refer to this blog post.
This item has been removed from the community because it violates Steam Community & Content Guidelines. It is only visible to you. If you believe your item has been removed by mistake, please contact Steam Support.
This item is incompatible with Greenlight. Please see the instructions page for reasons why this item might not work within Greenlight.
Current visibility: Hidden
This item will only be visible to you, admins, and anyone marked as a creator.
Current visibility: Friends-only
This item will only be visible in searches to you, your friends, and admins.
Pixel Space
Description Discussions2 Announcements1 Comments61 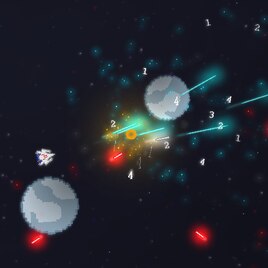 Sixo
Last Online
See all 8 collections (some may be hidden)

View Pixel Space in the store

Pixel Space has been released on Steam at the store page:
Pixel Space on Steam
Thank you all for your support and have fun playing the game.

Read More
Description
Pixel Space
is a 2D entertaining indie game where you are a ship in an infinite space and you can do quests, kill enemies in a waves system, customize your ship, buy weapons and lot of upgrades. Each weapon has at least two paths of upgrades. Ah... You can also destroy planets and turn them in black holes.
I am the only developer and the game will costs the least possible (around 1~3 $/€).
Popular Discussions View All (2)

To SisxoPro, because I don't know how to contact.
LinkToAnything
< >
61 Comments

Fruchttiger Oct 28, 2014 @ 12:49pm
please invite me to your friendlist in steam, we need to talk. thanks. greetings thomas

Pixel Space has been Greenlit and is now listed in the Steam store. For the latest information, purchase options, and discussions for Pixel Space, please see it on the Steam Store or in the Steam Community.
Visit Store Page
For more details Visit Community Hub
For latest discussions
If you really, really want to, you can continue to the Greenlight page. Information on this page may be out of date, since all the action has moved to the areas noted above.