Store Page
Arma 3>  Workshop > Ice's Workshop
This item has been removed from the community because it violates Steam Community & Content Guidelines. It is only visible to you. If you believe your item has been removed by mistake, please contact Steam Support.
This item is incompatible with Arma 3. Please see the instructions page for reasons why this item might not work within Arma 3.
Current visibility: Hidden
This item will only be visible to you, admins, and anyone marked as a creator.
Current visibility: Friends-only
This item will only be visible in searches to you, your friends, and admins. 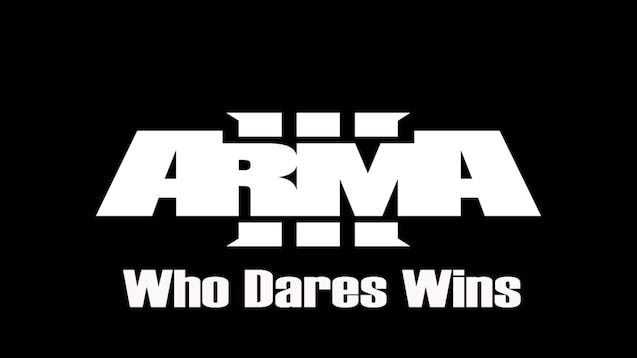 Ice
Offline
See all 18 collections (some may be hidden)

This item has been added to your Subscriptions. Some games will require you to relaunch them before the item will be downloaded.
Description
"Who Dares Wins" is a single-player campaign which consists of 9 short missions inspired by actual events.

NOTICE: Something happened and ARMA 3 launcher does not install this campaign. I tried to re-upload it, but ARMA 3 Publisher Tool refuses to do it (error: "Item publishing failed"). I created alternative download from google drive until this situation is resolved: https://drive.google.com/file/d/0B7O3RfC97FwCOGFBRjUxMFVrbVk/view

The story revolves around 12 British soldiers who were taken hostages by militia on Altis island and was inspired by Operation Barras, which took place on 10th September 2000 in Sierra Leone and was carried out by Special Air Service (SAS). The missions include helicopter, plane and UAV flying, vehicle driving, infantry combat and stealth movement. The estimated play time of the campaign is 1-2 hours.

If you like this campaign, please vote for it and support it in Make Arma Not War contest: http://makearmanotwar.com/entry/1dFV7WLD6L#.U-5OVWPqpj4 and rate it here, on Steam Workshop.
Thank you in advance.
< >
5 Comments

Ice  [author] Mar 26, 2016 @ 2:42pm
Having trouble with ARMA 3 publisher tools, that piece of software just refuses to upload items to workshop, so I decided to upload it do google drive: https://drive.google.com/file/d/0B7O3RfC97FwCOGFBRjUxMFVrbVk/view

Ice  [author] Mar 23, 2016 @ 4:43am
Looks like something is broken. When you hit the subscribe button, Steam should download it and install automatically (it should appear in "Mods" section in ArmA 3 launcher). I will try to reupload the campaign during weekend (I am currently abroad and do not have those data with me)