Greenlight > Games > Dark Amber Softworks's Workshop
Greenlight is being retired. For more information on how to submit games to steam, refer to this blog post.
This item has been removed from the community because it violates Steam Community & Content Guidelines. It is only visible to you. If you believe your item has been removed by mistake, please contact Steam Support.
This item is incompatible with Greenlight. Please see the instructions page for reasons why this item might not work within Greenlight.
Current visibility: Hidden
This item will only be visible to you, admins, and anyone marked as a creator.
Current visibility: Friends-only
This item will only be visible in searches to you, your friends, and admins.
Avenging Angel
Description Discussions2 Announcements38 Comments190 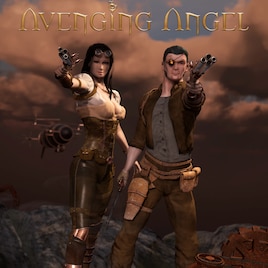 View Avenging Angel in the store

Ladies and gentlemen, we are now live in Early Access http://store.steampowered.com/app/367240/

...But I don´t mind having a lot of Steampunk games around, as long as the games are really good and well made.
And that seems to be the case with Dark Amber Softworks Steampunk action/adventure game "Avenging Angel". -Robin E, The Gaming Ground

Steampunk Beauty -Flog, Are You Gaming?

...What I do know is that this is a rather good looking FPS that is set in a steampunk world and is boasting such features as dual-wielding and an “interactive story” that includes a large amount of exploration. -Matt Chelen, Regretzer

A great addition to your FPS collection. -Alexandru Niculaita, Softpedia

Here is a game that really comes from the heart. -Moni, Zockwork Orange

Overview:
Avenging Angel is a story-driven FPS/Adventure game set in a Steampunk world.

The story takes place on in Scandinavia, in a steampunk setting, roughly 10000 years from our current day and age, where 21st Century has not only passed from history to legend, but also from legend into myth. The game is based on Henri Brandt's "The Land of Strange Gods" -universe. The island where Avenging Angel takes place is a fictional island on the coast of Norway.

Features:
Story:
You are an Associate of the Inventors Guild dropped on an island in the Atlantic Ocean on a routine maintenance job. As you venture through the island, it becomes clear that there is nothing remotely routine about this mission, as you are pulled into the web of international, as well as metaphysical, conflict. Decipher forbidden history, learn about forgotten tragedy, and in the end, answer the question of all questions: "What is existence?"

Gam3rBoiCUL8rBoi Oct 22, 2014 @ 7:24pm
How do I become a core team member? I have some ideas to really bring this story together

Avenging Angel has been Greenlit and is now listed in the Steam store. For the latest information, purchase options, and discussions for Avenging Angel, please see it on the Steam Store or in the Steam Community.
Visit Store Page
For more details Visit Community Hub
For latest discussions
If you really, really want to, you can continue to the Greenlight page. Information on this page may be out of date, since all the action has moved to the areas noted above.