Greenlight > Games > Garth-Tony's Workshop
Greenlight is being retired. For more information on how to submit games to steam, refer to this blog post.
This item has been removed from the community because it violates Steam Community & Content Guidelines. It is only visible to you. If you believe your item has been removed by mistake, please contact Steam Support.
This item is incompatible with Greenlight. Please see the instructions page for reasons why this item might not work within Greenlight.
Current visibility: Hidden
This item will only be visible to you, admins, and anyone marked as a creator.
Current visibility: Friends-only
This item will only be visible in searches to you, your friends, and admins.
Ride the Bullet
Description Discussions1 Comments116 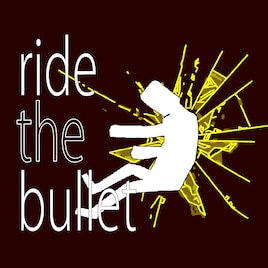 Garth-Tony
Offline
See all 2 collections (some may be hidden)
Description
Release date: As soon as it gets through Greenlight.
Hi. I'm Jordan Sendar. I spent just short of a year building every element of Ride the Bullet, from music to 3d models to level design. And like most other people on here, I'd like to spread this work to a large audience. I am an indie dev trying to make some cool stuff now so that I can make some even bigger, cooler stuff as time and budget allows. I decided to avoid the early access route so there would be no risk of making promises I couldnt fulfill. But now, with Ride the Bullet finally complete, I can release it to the world and let people assess the full experience. So now I give you the terrible marketing wordstuff:


You are a gun for hire with nothing to your name but your rifle and a single bullet. You have a special gift. You can control this bullet. Your objectives: take jobs, kill, build your reputation, and work your way up the crime ladder.

Ride the Bullet is a cross-platform game about speed, quick reflexes, and glorious ragdoll pixel-people death. In it you play as a gun for hire with the ability to steer a bullet. You will fire this bullet through various levels, completing the jobs given to you by your clients. The game includes a series of individual fast-paced steering puzzles where you'll find yourself breaking up shady deals in abandoned warehouses or even assassinating mob bosses in their own homes.


Ride the Bullet is a complete game and will be released on Steam immediately if it is greenlit. It was created solely by myself, and I hope to bring it to Steam both for my own sustainability and to spread it to the widest possible audience. I plan on charging no more than $5 (probably closer to $2 or $3) as the game has a limited scope and is designed to have a few hours of gameplay.

For now, Ride the Bullet is available for purchase on iOS, Android, and itch.io.

If you have any questions, feel free to post them here, tweet me @RadJor64, or check out my blog at {LINK REMOVED}http://blog.radjor.com


If you want to support an indie dev in need please hit Yes or pick up a copy of Ride the Bullet.

If you buy from itch.io, you will receive steam keys when Ride the Bullet is greenlit.