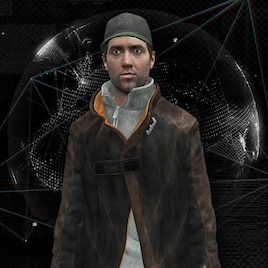 53 items
Description
Aiden Pearce (also known as The Vigilante and The Fox by citizens and the media) is the protagonist of Watch Dogs. He is a highly skilled grey hat hacker who has access to the ctOS of Chicago using a highly specialized device, the Profiler, to which Clara Lille later adds more capabilities. Because his actions led to a family tragedy, Aiden has taken to a personal crusade against the powers that be. His obsession with security, surveillance, and control borders on the paranoid and dangerous, extending to monitoring his own family (unbeknownst to them).

BOTxMALWARY May 25, 2019 @ 11:22pm
Can you make him blinking? Or just make his eyes moving, or make both o this! REEEEEEEEEEEEEEEEEE, please

「F.I.S.H」 Jun 19, 2018 @ 11:46am
he has a constant trumatzed stare in his eyes. Probably after he did those weird hallunication crap with the mad max and terminators.

That Awkward Agent Apr 4, 2018 @ 9:02pm
does anyone else think he kinda looks like nicolas cage