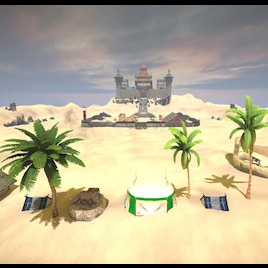 Elko
Offline
See all 88 collections (some may be hidden)

This item has been added to your Subscriptions. Some games will require you to relaunch them before the item will be downloaded.
Description
Sandcastle is a Horde Mode map which allows you to take advantage of several castle defenses against the ruthless hordes of Agathians eager to revenge their king. Use several types of burning pots to cook your enemies, impale them with the movable spikes, blast them with portable barrel bombs, shoot them with ballistae...

Description
The two huts in the map have initially blocked entrances. To open them up and get access to new items either burn the entrance with torches or use your weapon (see videos).
You play as a Mason in coop with fellow players against Agathian bots (pure PvE). The AI is partly enhanced, so they might be more witty than you expect.

Noteworthy changes to other Horde Mode maps so far:
-one handed weapons and shields are not lost on respawn
-score reduction on death
-stronger enemies give more score when killed
-when killed, you respawn as a ghost with a special ability which can be activated with F5
-special items (Custom Weapons section)

Custom Keybinds
The current buttons used in the map are the following:
-F1: teleport to throne room once a wave
-F2: vote for 'normal'-mode before the Agatha king is killed
-F3: vote for 'hard'-mode before the Agatha king is killed
-F4: use a Health Potion if bought
-F5: use the ghost ability if in ghost state
-G: Backjump ability if bought
-J: go afk for a moment to safe zone
-T: cancel throne defence if u r still alive

These keys can be configured in the player input ini file.

To play offline, solo / to manually download:
-First, subscribe in order to download the map.
-To download you'll need to run the old launcher, located in your install directory: Steam\SteamApps\common\chivalrymedievalwarfare\ChivLauncher.exe
-Click the "download subscribed steam workshop items" button in the bottom right
-Once that's done, launch the game and your downloads will be unpacked/installed
-Finally, to open the map, in game, type the following in your console (default keys: ` and Scroll Lock): open TO2-Horde_Sandcastle_p

If this command still does not work:
Do you see the mapfiles located in ...\chivalrymedievalwarfare\UDKGame\CookedSDK ?
They should be in the folder called 'AOCSDKLevels_AF0D62F34C23AE7F99745698F3B13639'.
If not check in '__CMWSDKFiles' if there is a file starting with that name.
If not you need to check if you subscribed and use the launcher again to download the files and wait until it successfully downloaded the files. If the download does not work, try again later. If all fails, contact Steam or open a discussion in the official Chivalry forum.

If you receive this message when connecting to a server: "Successfully downloaded all packages from Workshop, but server uses files that are not uploaded to Workshop or are out of date."
Then delete the local map files (described above) and download them again (also described above).

Those who clear the 'dungeon' will be listed on the website in a ranking if fast enough (http://horde-sandcastle.github.io/server.html).

Magic Weapons (formerly Donor Weapons)
Once upon a time there was an ingame purchase system to get these weapons which each have a special ability. Now they are called Magic Weapons and the ingame purchase system is gone. The Magic Weapons can be unlocked by reaching a high wave (can be set in configuration) or/ and by completing the dungeon (can also be set by configuration).
Note that players who formerly purchased the weapons can always get the weapons regardless of the above constraints which may or may not be set on a gameserver.

PINNED: Error when attempting to connect to a Horde Sandcastle server.
RadioactivePepsi
< >
1,469 Comments

VVizard Jan 3 @ 3:06pm
When the SDK arrives is there hope? The custom horde maps on Mordhau are pretty lackluster. Horde Crypt is better than all 6 Mordhau horde maps combined, and crypt got stale after a few games

VVizard Jan 2 @ 1:00pm
Elko I'm sure you get this a lot, but is there any chance for a Mordhau port of some kind? This map was the pinnacle of my Chivalry experience for many years and I can't enjoy medieval combat the same without trebuchet slingmen or plague doctor jedi

PROTON Dec 18, 2020 @ 2:20pm
Server is restarted from scratch (purged all files, deployed fresh ones). It should work now (just tested it with no mod files installed).

llhjb Sep 13, 2020 @ 3:33pm
Nope no go. Didn't work. Something else must be going on. I had a friend try it out on a fresh install and it gave the same error message. If anyone else has success let us know what worked! Also @Proton it may be helpful to see when the last person connected to the NA server to find out how long the issue has been going on

Zumvee Sep 12, 2020 @ 2:28pm
go to the third pinned topic in discussions and go to the second page. scroll down till u see my post and you can follow that.

llhjb Sep 12, 2020 @ 2:16pm
@Proton, just deleted CookedSDK contents, redownloaded and got same error message as DaDoc. Not sure if that's helpful but that's the only error message I received
< >