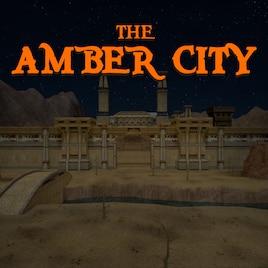 sir_kick_me2
Offline
See all 8 collections (some may be hidden)
You need DLC to use this item.

This item has been added to your Subscriptions. Some games will require you to relaunch them before the item will be downloaded.
Description
Description:
Another time lock malfuction, huh? Someone really ought to get these things checked out. We have arrived just outside the gates of the Amber city. Legends tell of the lost city of Amber, buried deep under the the earth after frequent sandstorms ravaged the area for years.

The city has recently been wiped out by Mental's forces. Make your way through the city, and eliminate any hostiles before they are able to fully fortify the place.

Vanilla-style gameplay mixed with some resource pack enemies and weapons, which have been rebalanced to fit better with the gameplay I had in mind (these changes do not affect the original resource pack items). Lots of corridor and open area shooting with the occasional big arena battle.

The fights are intended to be noticably more difficult than the base game. All of the fights have been tested on Serious difficulty and can be completed with consistency. A Serious difficulty zero death playthrough is certainly possible but is not something I believe many will be able to do.

Feedback and constructive criticism appreciated. Leave a comment if you run into issues.

P.S. for no reason in particular, I will mention that this map does not contain any 1 health pills in strangely out of reach locations.
< >
18 Comments

erc493 Jan 19 @ 3:30pm
the moving sandstorm wasnt the best because you had to rush to much but other than that it was a great map!

tmacedo Jan 10 @ 6:24pm
Amazing map! The final area was challenging enough with the moving sandstorm , but it would be cool too if we take the monsters at a slower pace.

sir_kick_me2  [author] Jan 7 @ 4:20pm
Yep, I did forget to set the material of the floor there. Issue should be resolved now. Glad you enjoyed the map.

Artemy Jan 7 @ 10:41am
Yo very cool map. Especially music puzzle. Also some feedback. Seems like floor of the are after gates when you enter the city has no material. No step sounds and dynamic decals

MaddHatt Jan 6 @ 1:18am
This was absolutely lovely. Bravo friend, bravo!

WilkySan Dec 20, 2022 @ 6:09pm
Not for the faint of heart, this map will test your mettle from the time you pick up your high-damage revolver to the time you get your hands on the big eff-off cannon. Very fun map!

Mankybus Dec 10, 2022 @ 10:35pm
Absolutely stellar and amazing map from this mad lad, ended up playing it on stream and was blown away at just how much fun I had with it! Stuff like this makes it a good time to be a Sam fan. Really looking for more maps in the future, don't ever feel the need to rush them as quality like this take as much time as it needs :)

steak jacobs Dec 10, 2022 @ 5:27pm
I don't think I'll be able to do a deathless run of this map (mainly because of the platforming section to grab the left hawk wing) but I'll definitely feature this map on my channel
< >