Store Page
Legend of Grimrock 2 >  Workshop > Adrageron's Workshop
This item has been removed from the community because it violates Steam Community & Content Guidelines. It is only visible to you. If you believe your item has been removed by mistake, please contact Steam Support.
This item is incompatible with Legend of Grimrock 2. Please see the instructions page for reasons why this item might not work within Legend of Grimrock 2.
Current visibility: Hidden
This item will only be visible to you, admins, and anyone marked as a creator.
Current visibility: Friends-only
This item will only be visible in searches to you, your friends, and admins. 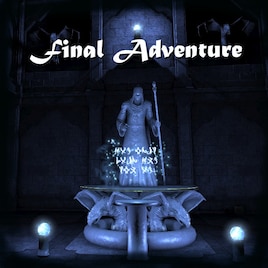 This item has been added to your Subscriptions. Some games will require you to relaunch them before the item will be downloaded.
In 1 collection by Adrageron
Livingrock adventures

You've heard rumors that a mage on a remote island needs the services of adventurers. The promised payment guarantees to provide you with funds until your death. After collecting your best equipment, you signed a contract and came to the Adventurers' Guild.

An open world adventure for a new party.
Expected playtime may vary from 40 to 90 hours, depending on difficulty settings and the goals you try to achieve.

The mod is a "spiritual successor" to The Guardians (but not a sequel).

Features:
- Inherited from The Guardians: development of your own base, mining, cooking, crafting, trading, enchanting, firearms improvement, different item sets, a spell learning system.
- Character classes and skills have been reworked.
- Some spells now belong to special schools of magic, and are only available for learning by certain classes of characters.
- Players earn score points for their achievements. There is a local Hall of Fame. ;)
- Having started the game, the player will be able to choose additional complications or bonuses, which will affect the final score points earned.
- Many quests can be completed in different mutually exclusive ways, sometimes involving a moral choice.
- An improved lockpicking system.
- A rework of the plant growing system.
- Many other changes to the game mechanics.

Known issues and how to avoid them:
* Sometimes the game can crash during saving. This is a common issue with big mods, and there are 2 known ways to avoid it:
Way 1: (recommended) Patch the Grimrock executable file with the "4GB patch" tool ( https://ntcore.com/?page_id=371 ). This will allow Grimrock to use additional virtual memory and solve this issue for all mods.
Way 2: Change texture quality to medium in Grimrock settings. This will solve the issue in most big mods at the cost of some picture quality.
* It is not recommended to import characters to this mod. This may cause game crashes.

Credits:
Thanks to Almost Human for the great game and editor!
Thanks to content mod authors for great models: Skuggasveinn, Mutman, AdrTru, Zimber, Phitt, Vanblam, Minmay, Bongobeat.
Thanks to Dench for testing, spell icon artwork and suggestions.
Thanks to Minmay for invaluable help with the intricacies of the Grimrock engine.
Thanks to the Grimrock forum guys for their help and advice: Isaac, Zo Kath Ra, Thom.
Thanks to Pecan for the great Guardians walkthrough.
Thanks to the beta testers: Knr, Ponyswagyolo, Twihunt, Ukdouble1, Kirill, RacerX.
Thanks to Patreon patrons for their support: Sebastian Boehmer, Feinne, Rahenna Orla, Bsquare, Alex D., Lorgon111, Felhico.
Thanks to Alex Diener, Boris (Nofair Fight), DoctorPirx, Tyler Anderson for their great lets plays of my mods and the inspiration they gave me.
Thanks to all The Guardians and Lost City players for feedback!

If you want to support me with donation, here my Patreon page: https://www.patreon.com/adrageron
Popular Discussions View All (17)

Question about late game secret in the pyramid [SPOILER]
Kady

PkerHide 3 hours ago
Thank you @Harpo and @Big Chimp!

kirill-busidow 8 hours ago
Anyone found all secrets in Elemental temple and Temple Subways?

For "Clean up the dirt" in 7 tombs, maybe you need shovel somewhere, or replace rotten rolls and toxic potion on table in room with good ones, or just it is not about secret.

harpo 10 hours ago
@ Big Chimp, tks, did a few and then exited. Don't know if doing all get any big reward?
@ PkerHide, I believe you don't use the gems on the lesser just on the dark blue ones. I have only done a couple lesser ones.

PkerHide 10 hours ago
Can anyone explain to me how to use the enchantment table? I have around 5 lesser enchant scrolls and I can enchant it normally. But if I try to follow the steps with the gems and herbs it doesnt work, it just takes the scroll alone.

Oji 20 hours ago
I would like to haha, last secret there.

Big Chimp Energy 21 hours ago
I've completed every "task" on the list for Seven Tombs with the exception of "Clean up the dirt". Can I get a hint for that?

Oji Dec 2 @ 2:22am
@Big Chimp Energy - to cite one of the inscriptions in pyramid - Gods love variety

Big Chimp Energy Dec 1 @ 8:01pm
@harpo read the signs on the walls and look at the map you find when entering there. It gives you a layout of the letters / numbers each square spells out on the floor. It will also display the current square's letter / number value at the bottom of the screen when you step on that square. If you just simply want to leave the area and come back to it later spell out "E-X-I-T" (which is one of the signs on the wall).

harpo Dec 1 @ 7:34pm
I think I am in trouble. I saved just before going down into the Scriptorium. Down there I have absolutely no clue what the hell I'm supposed to do. Yeah, move cubes around but is there no clues? Now I can't even go back to my last save because your only choice is to jump down into that room/level. You can't get out. Hints on what I have to do. If you can't figure out the puzzle the mod is over? Nice job if it is......
< >