Greenlight > Games > Monsters's Workshop
Greenlight is being retired. For more information on how to submit games to steam, refer to this blog post.
This item has been removed from the community because it violates Steam Community & Content Guidelines. It is only visible to you. If you believe your item has been removed by mistake, please contact Steam Support.
This item is incompatible with Greenlight. Please see the instructions page for reasons why this item might not work within Greenlight.
Current visibility: Hidden
This item will only be visible to you, admins, and anyone marked as a creator.
Current visibility: Friends-only
This item will only be visible in searches to you, your friends, and admins.
Apocalypse Cow
Description Discussions5 Announcements9 Comments249 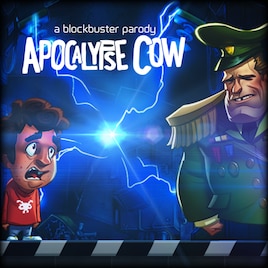 Monsters
Offline
See all 21 collections (some may be hidden)

View Apocalypse Cow in the store

Finally peeps, the time has come to unveil the current version of Apocalypse Cow. We opened up the official Store Page which shows the latest trailer and screenshots. As you will see, the game has improved dramatically!

We hope we'll re-ignite your interest as we're getting closer to release. Don't forget to support us by wishlisting the game and then by constantly speaking about it, 24/7!!!! Thanks =)

Hey there, people that got us greenlit!

I figured I should let you know that development is continuing strong and the game is shaping up to be something super cool. I don't know if anyone was at PAX, we had a booth there and it was the first ever public showing of Apocalypse Cow. It went amazing - it really was a great feeling, seeing people playing the game and having a great time with it.

With PAX now behind us it is back to the trenches. For the past months we've been doing some major updates to the game, mostly to the story, creating something that will put Mr Martin to shame. We are also rehauling our visual effects because.. well because cool VFX are cool! To celebrate we are releasing a new batch of screenshots!

I know development is taking longer than anticipated but hang in there. We are creating something that is worth the wait. A narrative driven, violent parody platformer that you'll have a blast playing.

Read More
Description
Release date: FALL 2014
Super Meat Boy meets Metal Slug as you become Penny, a SHIELDD agent to waging your war in this parody action platform extravaganza. The future of indie games (and the world) will be determined by your skills.

Explosions, weapons, slow-mo stuff, chin-down-eyes-up moments, blood and mayhem. A new age action platformer that requires lightning fast reflexes and no muscle memory. All these while dialogues spoken by real human beings tell a tale to cry for, a tale of intrigue and betrayal... pretty much like a Kardashian episode.

A few years in the future the creation of the Anima Rift brings the VideoVerse alive, allowing people to enter the worlds of video games and movies. The most skilled gamers become agents for SHIELDD and swear to serve, protect and occasionally discriminate against black people.

Penny is a gamer in love with AAA games but she is assigned to patrol older games as a low level agent. But she cannot shake the feeling that something dark and ominous is about to happen. This is the start of a saga, with the first chapter dealing with the Hair of Power.

PS: The game may or may not contain a bovine of apocalyptic proportions.
Popular Discussions View All (5)

Monsters  [author] Nov 23, 2017 @ 5:47am
Finally guys, it's time to unveil the current state of Apocalypse Cow. We opened up our Steam page, please go there to see the latest trailer and screenshots. The game has changed A LOT.

Monsters  [author] Oct 16, 2016 @ 3:02am
@Hamburger University If you think this alpha version looks promising wait until we get the new things up! We have completely neglected this page (and marketing altogether) but we have made big progress and will soon start releasing stuff.

Hamburger University Sep 2, 2016 @ 8:18pm
Is this even relevant anymore? I hope so, this looks promising

Apocalypse Cow has been Greenlit and is now listed in the Steam store. For the latest information, purchase options, and discussions for Apocalypse Cow, please see it on the Steam Store or in the Steam Community.
Visit Store Page
For more details Visit Community Hub
For latest discussions
If you really, really want to, you can continue to the Greenlight page. Information on this page may be out of date, since all the action has moved to the areas noted above.