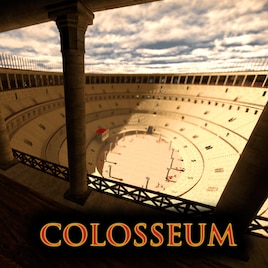 Otreum
Offline
See all 175 collections (some may be hidden)

This item has been added to your Subscriptions. Some games will require you to relaunch them before the item will be downloaded.
Description
READ THIS FIRST!:
This is not the Colosseum map that you are all playing in the official servers. This is the original working version of the map, on the workshop.
The current status of the official Colosseum map (the one edited by Torn Banner) is broken, they broke it, that's why it is so buggy.
Please do not rate this workshop version based on the broken Torn Banner version.
I have posted on the forums so that torn banner can fix the official version, so hopefully the official version will be fixed soon. (It SHOULD take them 5mins to fix with my solutions)

DESCRIPTION:
Ever wanted to know what it was like to fight inside of the Roman Colosseum?
Here is your chance!....Only there are no Gladiators (unfortunately).

NEW FEATURES: (As of 11/18/14):
- Added AOCTD-ColosseumPendulum_p which will always load the pendulum prop and all traps around and in it.
This also uses static lighting since the scene does not dynamically change, which should improve performance, but also look better.
I also added some more details and outter fences to force players into danger.
- Added more boats to the water battle, and populated boats with crates.
- Added new trap that is ambiguously named The Cage, it is brutal, but I'll let you work that out for yourself.
FEATURES:
- A near 1:1 scale of the Roman Colosseum (had to scale it up a little bit to allow people to move through passageways as Chivalry's player collision is too big.
You can even explore the interior of the Colosseum, however there is no Hypogeum, which you will see why in the Backstory description below.
- Randomized arena traps and props (Each round, the game could choose from an assortment of props and traps to load into the game, some of which are extremely deadly, some of which are just for running around on. Some traps which don't do direct damage, some that do.
For example, the game might load with nothing in the arena, or it might load with a giant axe/hammer pendulum gauntlet, or perhaps it will load in a center platform with spinning hammer traps, and springboards....)
- Multiple Arena themes (Bare-bones, Bare-bones with traps and props, Naumachia (boat battle), Oasis and Forest (more planned).
- Seemless randomization (There is no need to load a new level to get various traps or arena themes. They can load into the existing map seemlessly)
- Arena will randomize every 5 mins to keep gameplay fresh and exciting during every round. Admins have the power to disable this timer however.
- Support for nearly all game modes.
- Dynamic King of the Hill ( King of the Hill capture area depends on what props load into the arena, making King of the Hill unpredictable.)
- Huge amount of admininstrator controls (Admins can load whatever traps they wish, and whatever props they wish, or they might want to clear the arena floor.
Admins can also open the arena gates so that players can explore the arena using the command:
CE opengates)

KNOWN BUGS:
- I am sure there are lots of little niggly bugs here and there, but before uploading, I generally do thorough testing to try and break the level.
Only through gameplay testing with lots of people, can I see more bugs.
- Cannot fit through some doorways in the Colosseum interior. This is something I cannot help, the Chivalry player collision model is too big.
I have put teleporters in doorways and stairs, but a lot of them can't easily be accessed, or won't work due to player's huge collision box.

BACKSTORY OF HOW IT CAME TO CHIVALRY:
This Colosseum model was something I worked on years ago for an extremely ambitious game project, before Chivalry was even announced.
But due to various reasons, I had to can the project and work on smaller and smaller projects.

I consider the Colosseum model a bit of a success, but at the same time, an epic failure. The model is incomplete, and this particular one will never be completed.

Despite being incomplete, and despite it being very rough around the edges, it still looks amazing and feels amazing to be inside of (hurhur),
so I figured why let my model just sit in a folder somewhere, never to be seen again? Why not share it with the gaming community, and what better game
to do that with, than Chivalry: Medieval Warfare.

HOW TO INSTALL PROPERLY: (Because Chivalry and Steam workshop don't work very well)
1. Subscribe to the map.
2. When you start chivalry from steam, a screen appears that asks if you want to play chivalry or deadliest warrior. Down the bottom right corner of this screen, there is a download subscribed maps button which you must click to download the map (even though steam appears to have already downloaded it).
3. Start chivalry from the splash screen and in the console, type:
open aocffa-colosseum_p
...or one of the game modes listed in the description.
4. The map doesn't work too well with obstacles and bots, but you can still try by typing:
addbots 32

STILL HAVING PROBLEMS?
There may be an older version on the server you are trying to join, normally it will tell you this in an error, however sometimes it won't.


Feel free to leave feedback, either here on the workshop page or here on the Torn Banner Studios forum:
http://forums.tornbanner.com/showthread.php/21049-Roman-Colosseum

...and please check out my Mapping Contest Entry, which is my first UDK map, and first Chivalry: Medieval Warfare Map called On The Edge
Which you can find here:
http://steamcommunity.com/sharedfiles/filedetails/?id=275356082&searchtext=

Please subscribe, play, rate, and comment on the map if you wish to do so. Thank you ladies and gents! :)

I am creating my own game! Metal Heads 8 player party game.
Otreum

Otreum  [author] Aug 12, 2019 @ 3:17am
Hey guys, I just wanted to share a game that I have been creating called Metal Heads, it's an 8 player local or online party game where you compete with others in a bunch of mini-games.
If you're interested, check it out below.
If not, that is totally OK too.
https://store.steampowered.com/app/1132670/Metal_Heads/

Otreum  [author] Jul 27, 2016 @ 12:53am
I did at one point, but due to the way the level is scripted, I can't dynamically load seperate AI pathing for different arena layouts. It's way easier in UE4 due to dynamic AI path generation, but UE3 doesn't do it.

Spooky Groosy Jul 26, 2016 @ 8:27pm
Did you fix the AI for the bots so they actually move around and fight? Cuz that would be very nice. That's the closest thing to gladiators I have