Greenlight > Games > Fairytale Distillery's Workshop
Greenlight is being retired. For more information on how to submit games to steam, refer to this blog post.
This item has been removed from the community because it violates Steam Community & Content Guidelines. It is only visible to you. If you believe your item has been removed by mistake, please contact Steam Support.
This item is incompatible with Greenlight. Please see the instructions page for reasons why this item might not work within Greenlight.
Current visibility: Hidden
This item will only be visible to you, admins, and anyone marked as a creator.
Current visibility: Friends-only
This item will only be visible in searches to you, your friends, and admins.
The Exiled (formerly Das Tal)
Description Discussions1 Announcements18 Comments422 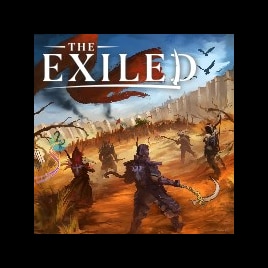 View The Exiled (formerly Das Tal) in the store

To round off a great year for Das Tal, and to celebrate reaching a total of 10,000 sign ups to our mailing list[buy.das-tal-game.com], we are giving away 100 permanent tester keys! Winners of these keys will have access to ALL Das Tal events during our alpha period!

All you need to do is sign up to our mailing list[buy.das-tal-game.com] by the 24th of December, which is when we will select our winners! 50 keys will go to those of you who sign up this month, and the other 50 will be given to some of our patient existing subscribers! As we head into 2016 we have a huge amount planned, and there will be some awesome alpha events to participate in! Don’t miss out on a key, your chance is only a few clicks away!

Rules of the competition:

- The competition is held by Fairytale Distillery UG (haftungsbeschränkt).

- The collected data will be used for internal use only and will only be used to send out newsletters to the topics that the were selected in the newsletter registration box.

- The user can withdraw his newsletter subscription at any time during and after the contest.

I have some exciting news today! At the end of this month we will be kicking off an event that will span over 9 days. A persistent, feature packed 200 hours of Das Tal. Our blog[www.das-tal-game.com] has a lot more details!

How Can I Play?

What Will The Event Involve?

If you have been taking a look at our blogs, you have no doubt seen all the work we have put into adding new features. The move to 24/7 servers will allow us to properly test how all these features perform in a persistent world. The main additions include:

- Clan warfare, settlement building & upgrades, sieges and daily resource raid events.
- Brand-new player progression system that allows for greater flexibility in how to develop your character.
- More than double our previous number of armor and weapon abilities. We’ve added tons of new abilities and we’ve reworked a lot of existing ones.
- Completely reworked crafting system, with many new materials to gather and strategic choices to make.
- A brand new map zone featuring our new Mountain biome. Grey is the new orange!
- Custom control configurations: No more problems with AZERTY keyboards! You can now create your own control schemes.

Read More
Description
Release date: not before 2015
"Das Tal" is now known as The Exiled!
[www.the-exiled.co]

Learn more about the game at our web site[das-tal-game.com] and sign up for the closed alpha test[das-tal-game.us7.list-manage.com].

What is "Das Tal"?
Das Tal is a fast-paced Sandbox MMORPG that focuses on player interaction. Full Loot and Open PvP create a game of 'risk vs. reward' where you weigh up your options before engaging others. PvP is never restricted, but cooperation is always rewarded. Each world is unique in its feature set and geography - and you pick those features! Time-boxed servers create winners and losers and allow you to regularly start anew. A class-less character system allows you to shape your character to fit your playstyle. You fight for resources to craft your equipment and construct your settlement. PvP combat is 100% skill-based, common and quick to be found. Both small-scale clashes and large-scale sieges are available for all players at any time.

The Story
Das Tal makes you a prisoner in a dark fantasy world. After getting dumped in the valley, you only have limited time to grow stronger, find a trustworthy group of friends, set up your own stronghold and finally escape from the prison valley - or die trying. But you are not the only one wanting to escape: Hundreds of other players have the same goal and some may not want to co-operate with you. Some may even elect to side with the oppressive regime in the city above and leave the valley through betraying you.
more ...[www.das-tal-game.com]

Originally posted by Som Pourfarzaneh - MMORPG.com:
An interesting take on what sandbox MMOs can look like.

Features
The Essence of a Sandbox MMORPG
Das Tal is a relatively small game, but it's a true Sandbox MMORPG with a persistent world. This means that the world keeps spinning and developing over the server’s lifetime, rather than only being active when a player logs in. That does not mean that players will spend all their time combining scraps of materials and hunting animals for food. Instead you will meet other players in PvP combat and your world will tell the story of those fights. No quests. No cut scenes. No filler.

Open PvP and Full Loot
Player interaction is the key part of enjoying a Sandbox MMORPG, and for this reason we will not restrict PvP with padding systems such as flagging or safe zones. Instead, players will find that there are consequences and benefits to how they interact with their fellow players - even those of a different skill or character level. Veterans will be rewarded for mentoring newbies. Ganking newcomers is a dangerous game - as they don’t lose their gear but your high-level stuff easily gets lost.

Custom, Time-Boxed Worlds
Time-Boxing a persistent MMO means means breaking up an endless journey into unique chunks. Each server in Das Tal will eventually reach a climactic end event and then refresh, leaving behind a world full of stories, winners and losers. You as the players then decide on the feature list of the new server and eventually enter this new world with completely new challenges.

Limited Grind: Compatible with Having a Real Life
Das Tal will remove a large portion of the grind that is currently necessary in other Sandbox MMOs. You will not be forced to macro your skills or click on resource nodes for hours. Instead you will find that both character progression and the war for resources are tied to PvP events big and small. This means frequent raiding, treasure hunts and city sieges instead of farming mobs for hours and hours.

Player Settlements & Sieges
All cities in das Tal will be player settlements. You will restore the ruins that you discover in the game world and use them as defensive structures for your clan. These settlements will also offer facilities for training, crafting and storage - and they are your clan’s major respawn points. Every now and then you will be sieged by those clans who wish to take your town - and sometimes you might even be the attackers.

Resource Warfare & Player-Driven Economy
You will spend your prime time in game fighting to capture and hold resource deposits. Those are your means of gaining materials for crafting and building, but they can also be used as a method of starving out your opponents. Denying enemies the ability to craft better gear or improve their settlement could mean a serious tactical advantage, turning the tide in what may have otherwise been defeat in a head-on battle.

Fast-Paced Combat
PvP is at the core of Das Tal. Technology has advanced enough so that we can finally take a step away from good ol’ Tab-targeting and create an exciting combat system that rewards accuracy, timing and tactical decision making. All abilities in Das Tal will be free-aimed. Full friendly fire & player collision will be enabled. An organised group of skilled players will have a significant advantage against a simple zerg.

Flexible Character Development
Characters in Das Tal are classless. That means that abilities are attached to weapons and armor so that players construct their build when they put on their equipment & pick their abilities. This makes changing roles a matter of swapping out equipment & doing some re-training, allowing players to experience many types of gameplay without having to create multiple characters.

State of Development
Current Phase: Pre-Alpha
We have spent the last 18 months on first stage of game development: pre-production. We have assembled an awesome team. We have created multiple gameplay and technology prototypes. We have found our art style and setting. We've done the scheduling and the budgeting. And then we have raised the necessary funds[www.das-tal-game.com] to start development.

We're now in Pre-Alpha. That means that we're slowly building the core elements of the game: The game server, the basic combat system, the first characters. Read our blog for the concrete development roadmap[www.das-tal-game.com].

Can I play the game?
Yes and no. We are running a closed alpha test[www.das-tal-game.com] for the game. If you want to be part of the earliest test group then you can sign up here[das-tal-game.us7.list-manage.com] to join our alpha waiting list.

Synthe May 26, 2015 @ 3:45pm
I haven't been this excited about a game in a long time. The approach Fairytale Distillery chose, for developing Das Tal, won me over. Their ambition to create a quality experience; the dedication to deliver content; the transparency with fans and supporters: the truth of this is prevalent in the discussions and videos I found online. I put my money where my mouth is, so to speak, by backing them on Kickstarter. Looking forward to June!
< >

The Exiled (formerly Das Tal) has been Greenlit and is now listed in the Steam store. For the latest information, purchase options, and discussions for The Exiled (formerly Das Tal), please see it on the Steam Store or in the Steam Community.
Visit Store Page
For more details Visit Community Hub
For latest discussions
If you really, really want to, you can continue to the Greenlight page. Information on this page may be out of date, since all the action has moved to the areas noted above.