Greenlight > Games > ROSEVERTE's Workshop
Greenlight is being retired. For more information on how to submit games to steam, refer to this blog post.
This item has been removed from the community because it violates Steam Community & Content Guidelines. It is only visible to you. If you believe your item has been removed by mistake, please contact Steam Support.
This item is incompatible with Greenlight. Please see the instructions page for reasons why this item might not work within Greenlight.
Current visibility: Hidden
This item will only be visible to you, admins, and anyone marked as a creator.
Current visibility: Friends-only
This item will only be visible in searches to you, your friends, and admins.
dUpLicity ~Beyond the Lies~
Description Discussions0 Announcements1 Comments238 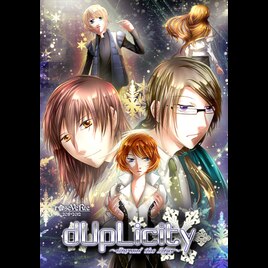 ROSEVERTE
Offline
See all 37 collections (some may be hidden)

View dUpLicity ~Beyond the Lies~ in the store

Store page
Recent Announcements View All (1)
dUpLicity ~Beyond the Lies~ has been greenlit!
November 26, 2014 - ROSEVERTE

It's been a while and today dUpLicity ~Beyond the Lies~ has been greenlit!
I'm really excited for this ><
Hope you like my other project on greenlight as well :D

Other East Tower games will be following in a near future.
Read More
Description
Release date: March 2011
dUpLicity ~Beyond the Lies~ is the first commercial romance Visual Novel (Otome game) made by roseVeRte.

STORY
-----------
Yukina Kudou looks like your normal high school student, but she has a huge secret. She was ordered by someone to be the girlfriend of Youji Kataoka. She doesn't know why, nor what the true purpose behind it is. Everything begins from a mistake of the past and continues on as an eternal lie.

In the end, What will she find beyond the lies?

ROSEVERTE  [author] Jan 7, 2015 @ 10:25pm
ah... if you mean the movie etc shows black, it was a problem with couple graphic cards which didn't occur on my pc. there is a support email address at the back of the cd box, and also i already mentioned how to solve it on my website. i already upgrade the renpy version so i hope it won't happen anymore.

puppyfurlove Jan 7, 2015 @ 7:56am
Sorry I can't seem to find where I'm supposed to contact you at, though if you didn't see all the black outs it had maybe it was just my cd, either way it was a fun game.

ROSEVERTE  [author] Jan 7, 2015 @ 3:00am
If you found bugs please let me know by sending me emails through my support email account. I always checked the version I burned to CD and maybe I don't get the bugs you've mentioned.

puppyfurlove Jan 6, 2015 @ 2:20pm
I enjoyed playing this when I got the cd, there was quite a few bugs in it then though. I hope that it's all fixed up when steam gets it I may try it again.

dUpLicity ~Beyond the Lies~ has been Greenlit and is now listed in the Steam store. For the latest information, purchase options, and discussions for dUpLicity ~Beyond the Lies~, please see it on the Steam Store or in the Steam Community.
Visit Store Page
For more details Visit Community Hub
For latest discussions
If you really, really want to, you can continue to the Greenlight page. Information on this page may be out of date, since all the action has moved to the areas noted above.