Store Page
Train Simulator >  Workshop > heardturkey's Workshop
This item has been removed from the community because it violates Steam Community & Content Guidelines. It is only visible to you. If you believe your item has been removed by mistake, please contact Steam Support.
This item is incompatible with Train Simulator. Please see the instructions page for reasons why this item might not work within Train Simulator.
Current visibility: Hidden
This item will only be visible to you, admins, and anyone marked as a creator.
Current visibility: Friends-only
This item will only be visible in searches to you, your friends, and admins. 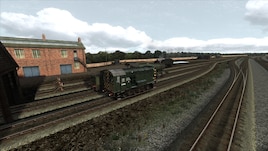 heardturkey
Offline
See the collection (may be hidden)

This item has been added to your Subscriptions. Some games will require you to relaunch them before the item will be downloaded.
Description
This is the finished version of my alterations to the original Great Western Mainlines (Paddington to Oxford) Route as an attempt to simulate the line in the 1960s.

THE METROPOLITAN LINE IS NOT REQUIRED - I DO NOT OWN IT.

SCENARIOS
The route is now available for Workshop scenarios to be made.

Scenarios I made before this can be found at:

and downloaded for free.

Wooden sleepered track from Port Road used, TPWS removed, OHLE removed and floating track corrected. Several Locomotive sheds and sidings have been added where possible without causing potential problems due to multiple track rules. Locomotive sheds include Southall, Slough, Reading, Didcot and Oxford. Extra sidings have been added at Acton, Reading, Didcot and Oxford + other smaller sidings. These extensions roughly correspond to the actual layouts but were built without reference to track diagrams.

UK Pro colour light signals used from Paddington to Hayes. Semaphore signals are used on the remainder of the route. This was to try and simulate the coming modernisation.


I hope you enjoy this route but it is not a sleeper by sleeper re creation of the line. The freeware High Wycombe Branch fulfils that.
< >
29 Comments

moonflower Oct 12 @ 11:50am
Hi heardturkey's, this route is absolute stunnimg, so much work in it. Very well done. The atmosphere is great with all the additions on the line, as building & sheds & turntables. I dit two scenarions and is great fun to drive. Thank you very much for sharing. Cheers Peter

Not.Silent Sep 24 @ 4:25pm
Well done heardturkey. I will be publishing my first scenario on your route in the next day or two.
Thanks for all your hard work you have put into this route. It is appreciated. I look forward to creating more 'steam' scenarios on it in the future, near Paddington itself. Cheers.

AllyourKitty Sep 20 @ 5:02pm
I've just had a run along the line and I'm very impressed with your work. It's great to have a 60's steam and diesel mainline in the simulator.

heardturkey  [author] Sep 4 @ 12:33pm
Hi. just tried now and no luck. Weird thing is I accidentally went to the Publish route page and nothing was greyed out which suggests i could have updated it again. I even did the nuclear option earlier today of deleting the route and doing a file verification. I've put in a ticket to DTG though not holding my breath.