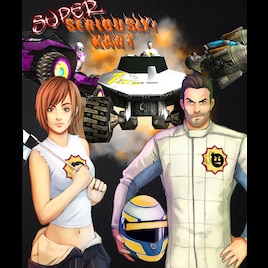 This item has been added to your Subscriptions. Some games will require you to relaunch them before the item will be downloaded.
In 1 collection by Pan
Super Seriously! Kart

4 items
Description
Super Seriously! Kart (abbreviation S! Kart) is a karting mod/map pack for Serious Sam HD:TSE in which you race on several tracks in custom painted Warthogs (called Karts) in order to beat the opponents to the finish line. Races come in 2 flavours, Race and Battle Race with both modes being played on all tracks. Also to be available are Battle Courts where the 2 primary game modes, My Burden and Last Man Standing are played. These square, small arena based courts are battles played out for around 6 people each in a kart using battle mode rules to acheive the goals of My Burden/Last Man Standing.

Each kart has their own theme, owner and designated number. They'll also have a custom warehouse for their kart in the final release along with a player model to go with it. (Not always)

Bind the USE key in game to "F" to get in and out of karts. Play in Deathmatch mode to play properly and choose Super Seriously! Karts chapter for a list of levels.

Nextor Dec 10, 2014 @ 6:32pm
Vehicles generally cannot move up hills, rises or out of water without a head start. Not usable.

virtual balboa Jul 28, 2014 @ 5:49am
Hmm. Seems like a second restart was needed after installing the mod. Changed nothing, but now it works, oddly enough. Only problem is that I have no idea how to get in a kart.

Open up moddable. Multiplayer -> Versus -> Start Server -> Deathmatch (nothing else) -> Level -> Super Seriously! Kart Tracks -> Choose track -> Auto-cycle maps off or on, depending on what you want -> Start the game and play.