Store Page
Dota 2 >  Workshop > LainVohnDyrec's Workshop
This item has been removed from the community because it violates Steam Community & Content Guidelines. It is only visible to you. If you believe your item has been removed by mistake, please contact Steam Support.
This item is incompatible with Dota 2. Please see the instructions page for reasons why this item might not work within Dota 2.
Current visibility: Hidden
This item will only be visible to you, admins, and anyone marked as a creator.
Current visibility: Friends-only
This item will only be visible in searches to you, your friends, and admins. 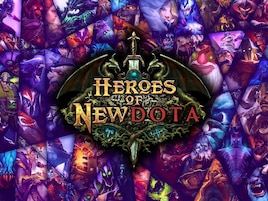 LainVohnDyrec
Offline
See the collection (may be hidden)

This item has been added to your Subscriptions. Some games will require you to relaunch them before the item will be downloaded.
Description
Through endless strife of sentinels, dires, mortals, gods and outer being in the Terren Plane, it became a catalyst that breaks reality. Dividing Planes to pure chaos and uncertainty. Rifts creating alternate versions of each reality. Some might felt familiar, almost nostalgic and natural.
This is not a war between two gods anymore. This is the beginning of Rift Wars.

Current Contents:
- Standard Dota 2 Map but the heroes are alternate universe versions of a nostalgic related games ;)
- You can choose from the original Dota 2 heroes or the "Alternate Universe" version

Alternate vs Dota Stats (and some future contents)
LainVohnDyrec
< >
72 Comments

LainVohnDyrec  [author] Aug 15 @ 8:34pm
just tested it it works in my end, tho I can see a noticable delay when picking (unfortunately this is needed for the game is checking if the hero is also picked)

LainVohnDyrec  [author] Aug 15 @ 8:32pm
now active, you can also pm me for this, it will help a lot if I can see more data about this

LainVohnDyrec  [author] Aug 15 @ 8:02pm
valve is now checking the update, lets see if this fixed it

LainVohnDyrec  [author] Aug 15 @ 7:56pm
I made some changes in the AI code so that I can Isolate the issue within the server.

LainVohnDyrec  [author] Aug 15 @ 7:39pm
Hi dinkhiem
I just checked the game and did not see that issue.
are you playing solo with bots or with player?
this will help me identify if it is a server or client causing this

dinhkhiem199833 Aug 15 @ 4:39pm
I can't pick hero anymore after the update. Before, clicking a hero would bring up the UI to choose path, now nothing and absolutely nothing to click to proceed.
< >