Store Page
Left 4 Dead 2 >  Workshop > keved's Workshop
This item has been removed from the community because it violates Steam Community & Content Guidelines. It is only visible to you. If you believe your item has been removed by mistake, please contact Steam Support.
This item is incompatible with Left 4 Dead 2. Please see the instructions page for reasons why this item might not work within Left 4 Dead 2.
Current visibility: Hidden
This item will only be visible to you, admins, and anyone marked as a creator.
Current visibility: Friends-only
This item will only be visible in searches to you, your friends, and admins. 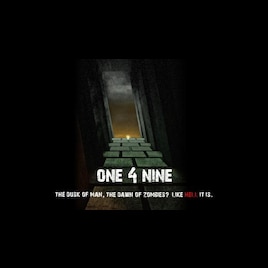 This item has been added to your Subscriptions. Some games will require you to relaunch them before the item will be downloaded.
In 1 collection by keved
One 4 Nine

4 items
Description
In the Nevada Desert, the U.S. Army have built a Military base around an ancient 'alien tomb' and after years of trying have managed to open it. Four survivors heard rumors of a fortified safe zone in the base, but have no knowledge of the tomb nor what will await them upon arrival...

Also thanks to all those who playtested the campaign during development and provided feedback, particularly csz and faluhsi.

Have you played the campaign and want an explanation of the finale?
**SPOILERS** http://one4nine.co.uk/explanation.html **SPOILERS**

When all parts are downloaded they may be listed as conflicting with each other. This is a minor error that can be ignored and does not affect being able to play the campaign in any way.
< >
16 Comments

First, the spawn rates are just plain unfair for the entirety of the map. If you're the type of player who likes to take things slow then you literally get pushed backwards by literally constant special infected spawns. I think the author intended this since there is also a crazy amount of health in pretty much every room you explore. The other negative is the finale. That was just nonsense if I'm perfectly honest. I went into that room with the giant machine gun and a katana. You cannot reload the giant machine gun and there are no additional weapons in there. Then when you trigger the finale it spawns literally every type of special right on top of you. Then an ever escalating series of waves including tanks (plural), even more specials than the rest of the map, and an endless megahoard. I'm not ashamed to say that I failed under these circumstances and I won't be playing again to see how it ends.

shlam Feb 26, 2018 @ 3:22am
This map was both great and terrible at the same time. The stage design was brilliant, the atmosphere of the levels was astounding, the story and easter eggs were brilliant too. I'd be happy to say the first 4.5 parts are amongst the best workshop content on the market. So you may be wondering where the terrible comes into it. Well there's two aspects. (TBC)

Street Pharmaceutical Sales Rep. Dec 28, 2014 @ 11:35am
We both got the file off of Steam Workshop, the only difference is he downloaded his the next day after I did. However, I un-subbed and resubbed for part two and it still gave the same error. Meanwhile, parts 1, 3, and 4 work just fine.

keved  [author] Dec 28, 2014 @ 5:15am
@Based Kazuki: It sounds like one or more of your group has an earlier version of the campaign. The latest version here on the Steam workshop is actually version 13. Have all your friends also subscribed to the version here on Steam, or downloaded via a different website (such as gamemaps etc)? If the latter, try getting them to delete the vpk file and subscribing to all 4 parts here on the Steam workshop.

Street Pharmaceutical Sales Rep. Dec 27, 2014 @ 10:04pm
I have all four parts, and it worked just fine singleplayer, but when I play with friends, we can play the first map just fine, but we get an error that says my map bsd. file is not the same as his.
< >