The Hand of Merlin

Store Page
The Hand of Merlin > Guides > Mibs's Guides
This item has been removed from the community because it violates Steam Community & Content Guidelines. It is only visible to you. If you believe your item has been removed by mistake, please contact Steam Support.
This item is incompatible with The Hand of Merlin. Please see the instructions page for reasons why this item might not work within The Hand of Merlin.
Current visibility: Hidden
This item will only be visible to you, admins, and anyone marked as a creator.
Current visibility: Friends-only
This item will only be visible in searches to you, your friends, and admins.

Modding Guide - Units
By Mibs
Extensive and detailed guide to adding new Units in The Hand of Merlin, written by its game designer Mat.

Adding Enemies to a level

Comments
Introduction
In this guide, We’ll talk about adding more Units to our game. This can be both new characters or new enemies.

What is a Unit?
In The Hand of Merlin, a Unit is a dynamic entity capable of taking actions. It has attributes, including Health and Armor, and is always part of a Warband, a “side” - Player or Enemy.


Every unit is described with two files: a Unit Params and a Unit Class.
Unit Params
A Params file (from parameters), with the extension .ep, is where we house most of a unit’s visual information and identification.

You can create one with the Create menu (CTRL+N). Go to the Generic group, and browse the (Merlin) Unit params type. 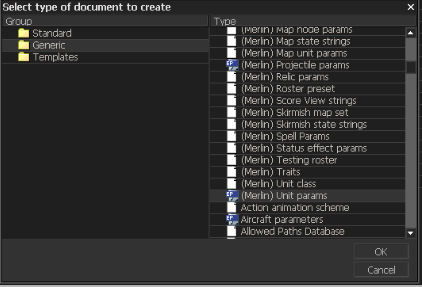 
Now, let’s take a good look at a Unit Params file, and explain how each entry works. 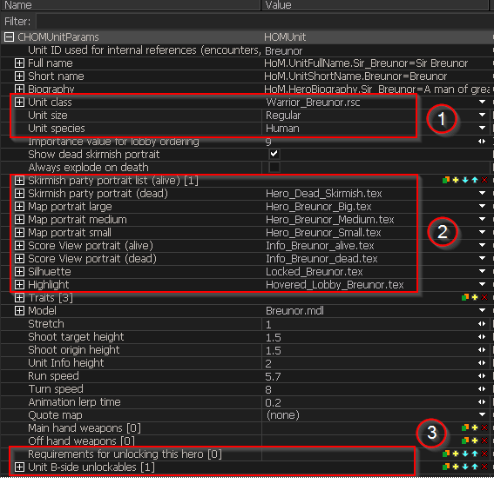 First, we have the unit’s identification.

Note that because these are text entries, they need to have both an identifier and an actual text, to facilitate translations.


Then we come to #1, Unit’s Skirmish behavior.

In category #2, you’ll find Portraits. We got a ton of those, so feel free to check the ones already made to find out the right sizes and styles. 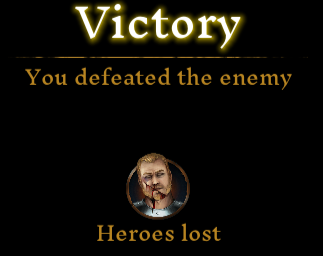 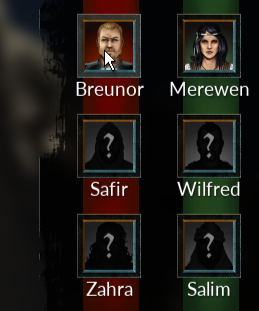 After that, you have several entries about the unit’s Visuals. The .mdl entry handles the actual model and animation information, but the rest configure how the unit behaves in the map. Take particular care when using Shoot Target and Origin, as this governs how the unit interacts with projectiles - where other units try to shoot it, and where its projectiles originate from.

Note that Quote Map and Weapons are deprecated.

The first is the requirements to unlock a hero - nothing here means the character is already unlocked. Here’s how Rana, for instance, is set up:

This is a complex entry where you can determine what sort of in-game event needs to happen for a character to be unlocked. Note the obvious Description entry, but the magic happens when you determine the Event Type. Each event type describes how it works, and then the final 4 entries determine how the event is checked. For the above example, we are listening for >=5 instances of “Spend Currency” event, but we reset the tracker at the end of every run/session.

To qualify the event, we use the Inspectors. For Rana’s unlock, we set up two: One describes that the currency we’re looking for is Mana, and the other describes that we can only check for events that happen in a specific zone, Albion. Here’s how we did it: 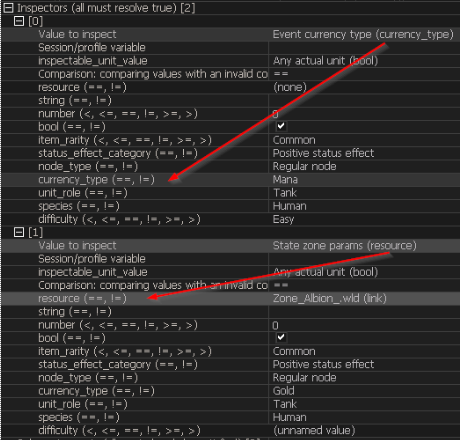 Once you set a Value to Inspect, you’ll see written in it the information of which other entries we need to fill, as noted in the image above. This takes a bit of trial and error to get right, but all the required information is laid to you in the descriptions (Thanks, MarkoP!)

But besides how you actually unlock it (by the way, we use the same unlocking for all characters: just have it complete a run without dying. Check any of our heroes in the Heroes folder for how we set it up), you can put a Name for this alternate version, add some bonus attributes, and even put an alternate model/texture.
Unit Class
Now let’s work on the Class. You can use the Create menu, but I suggest you just click on the appropriate entry in the Params file and select “New”. Then, remember to save the new file - we use the Content/Merlin/UnitClasses folder for that.

Now, the Unit Class file is a bit simpler, but it houses many important configurations. Take a look at Breunor’s: 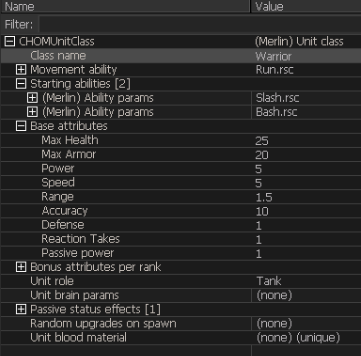 First, you have a Class Name. This is only for show. If you want to specify if this class is to be considered a Warrior, Ranger or Mystic for ability and AI purposes, use the Unit Role entry, assigning Tank, Nuker and Support respectively.

Then, you have to decide which abilities the unit is able to perform. A Movement Ability, most likely Run.rsc, and then the Starting Abilities. For player characters, we recommend only 2 abilities, a base attack (Slash,Singe and Shoot are our examples) and an extra one, like Bash for our Breunor example.

If, however, you are working on an enemy unit, go nuts. We recommend up to 5 abilities to keep the AI reasonable.

Then, you got your Base Attributes, where you can define your unit stats. Pretty self-explanatory if you know the game, but note: “Defense” refers to evasion, “Reaction Takes” is not used in the current design, and “Passive Power” is a hidden attribute you can use to scale things behind the scenes, but the player has no knowledge of that.

Now, note Bonus Attributes per Rank and Random Upgrades on Spawn. This is how units get stronger or have small variety in their stats.

Bonus Attributes per Rank is only used for player characters. It's a flat increase added whenever the units level up. Right now, this has been set to 0, but you can change that and even add fractional numbers if you want. Enemy units, unable to rank, are not affected by the entries here.

Rankup Bonus (not visible on the screenshot) creates cards on rankup which allow the player to choose which attribute to increase. It's currently set as 2HP or 1 Armor with an added random card choice between Power, Evasion, Range, Accuracy, Movement every 4 levels. Enemy units also do not gain this.

In The Hand of Merlin, we scale enemy power per zone index, in a file attached to the Random Upgrades on Spawn entry. To do that, we use a structure similar to the Blacksmith Upgrades, where every zone represents a new tier.

As an example, here’s MinorAbominationUpgrades, used on Mandrake, Wyvern and Redcap. You can find all others in the Merlin/Enemies/BlacksmithUpgrades folder. 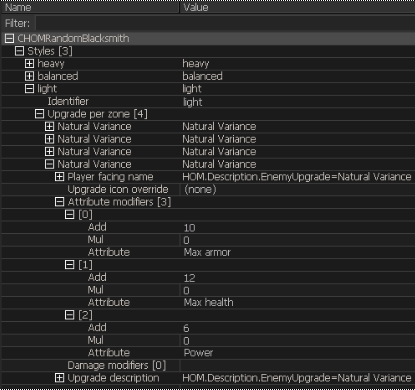 There are 3 “styles”, to generate some variety. Each style has 4 upgrades *for each zone - Albion, Marca Hispanica, Al-andalus, Jerusalem). Each entry has a few attribute modifiers. The expanded entry above means that 1 in every 3 Minor Abominations spawned in Jerusalem will have +10 Max Armor, +12 Max Health, and +6 Power added to their base stats.

Pretty easy to adjust, I hope!

Finally, if your unit is an enemy unit, assign a Brain param. We talk more about those in their own guide - Artificial Intelligence.
Adding Enemies to a level
Alright, last bit. Let’s add a character to a level as an enemy, so we can see it spawn. While the creation of maps is covered in another guide, here’s a quick rundown on how to add an enemy to one. I recommend checking Content\Merlin\Examples\Gameplay\GameplayTest as a baseline.

Where XXXXXX is the name of the params, like warlockParams or test1Params.
Simple as that, whenever that skirmish start, the unit will be spawned on a spawnpoint. Make sure there’s no other ones set to the same spawn point, as seen on the Creating new Levels guide.

Testing Characters
A few tips to test out your characters:

New units will make your experience even more varied. Have fun!