Store Page
Garry's Mod >  Workshop > Cute Furry Girl 22's Workshop
This item has been removed from the community because it violates Steam Community & Content Guidelines. It is only visible to you. If you believe your item has been removed by mistake, please contact Steam Support.
This item is incompatible with Garry's Mod. Please see the instructions page for reasons why this item might not work within Garry's Mod.
Current visibility: Hidden
This item will only be visible to you, admins, and anyone marked as a creator.
Current visibility: Friends-only
This item will only be visible in searches to you, your friends, and admins. 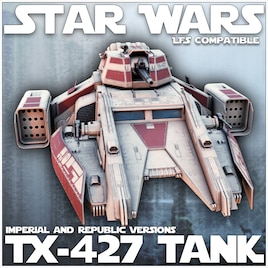 Brono
Online
See all 569 collections (some may be hidden)

We could have kept this server side, But we didn't. Why? Well it's simple so many servers will get 'custom' content made and keep it on the server while at the same time use countless addons created by members of the SWRP community for free. It is only fair to contribute back too the community when possible.


The TX-427 Tank is not a lore tank, It was created due to the lack of non-walker tanks on the workshop.


The TX-427 Experimental Class Fighter Tank, also known as the Republic Experimental Fighter Tank, was a light, quick-strike repulsor tank manufactured by Rothana Heavy Engineering and used by the Galactic Republic during the Clone Wars and later the Galactic Empire and Alliance to Restore the Republic during the Imperial Era. It was equipped with two side heavy laser cannons, two side rocket pods, and a heavy plasma turret located on the top.


Credits:
Lucasfilms / Disney for Star Wars.
For commissioning this pack HerpBrownstainz (Me), Bronson & Kassius
For creating, texturing & rigging the model Some_stranger
For turning the model into a LFS Vehicle niksacokica
For assisting in making the model more LFS capable Deno
For fixing pose parameter issues Luna
For the concept art used to create the tank RoadWarriorZ44[www.deviantart.com]
For the epic renders Hopeless

Nothing in these files or/and code may be reproduced, copied, adapted, merged or modified without direct consent from HerpBrownstainz, and doing so would be violating Valves Terms and Conditions and the Steam Workshop Rules [wiki.facepunch.com]
Tags: tx130, lfs, star wars, tank, starwars, tx 130
< >
52 Comments

Brono  [author] 2 hours ago
I am the Captain now.

Cute Furry Girl 22  [author] 6 hours ago
Contact Brono if you are after something too be done or fixed etc. He is in charge now.

『104』 Epilife 18 hours ago
Hello guys, Can I make skin of your addon for my server please ? ^^

Brono  [author] Jul 4 @ 11:19pm
Make sure you have subscribed to all required items - Hopefully, some updates will be coming for this addon soon.

Cute Furry Girl 22  [author] Jun 23 @ 2:17am
Hello People. I haven't been able too really play anything due to IRL stuff so I doubt this will ever be updated by me. Any of my fellow contributors are more then welcome too update it on my behalf though.

That being said anyone is able to modify this addon to their liking as long as you credit the original addon. This is a fair deal.