Comments
Update for GOG Cut
6/16/22
Well slap me with a Wabbajack and call me Grandma Shirley, there's an even easier way to get this ol' girl up and running! This was found courtesy of Whamu in the Steam forum.

GOG has released a preconfigured version of DF Unity they're calling the 'GOG Cut[www.gog.com]', already set with a best-of list of mods from Nexus. Download and install the version provided there, then copy the contents of the "Daggerfall Unity" installation folder that it creates into the Steam "The Elder Scrolls Daggerfall" folder. It should look something like this: 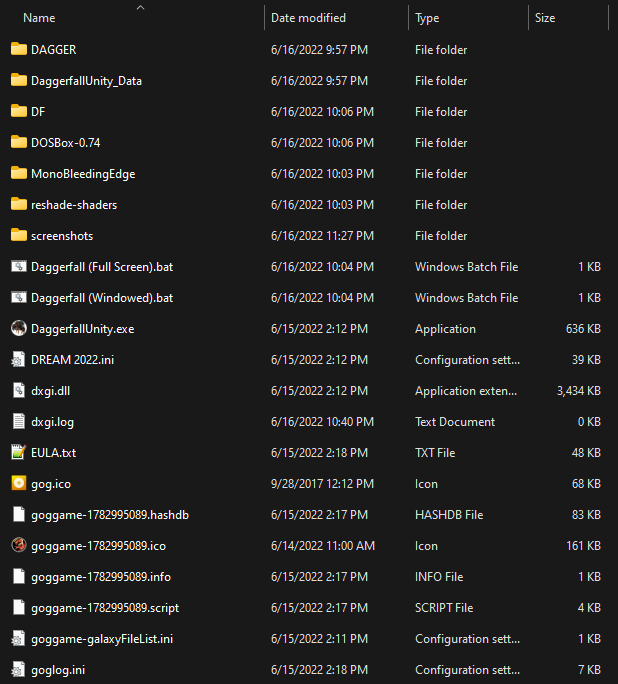 Right click the Daggerfall listing in your Steam library and select Properties. In the Launch Options field, enter the full file path address to DaggerfallUnity.exe in the Steam install folder. Put quotes around the address, enter a space, then add %command% at the end. You should have a result that looks similar to this: 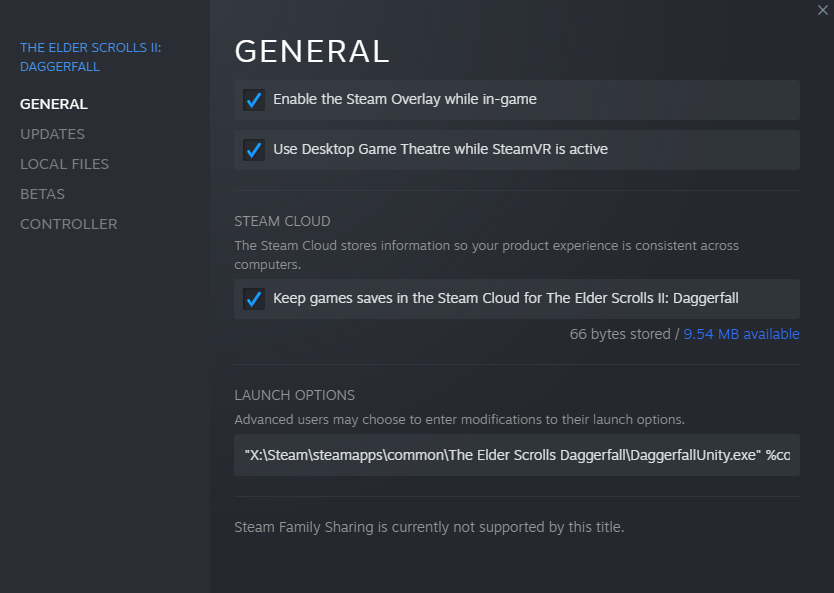 That should be it! The game boots directly into DF Unity straight away, no hassle.

Please be aware that at time of writing there are concerns from some of the original modders that they had not fully given their consent to their mods being in this package. You may instead want to run these steps with a vanilla installation of DF Unity instead, but there may be additional configuration needed for that.

Happy dungeoneering!
Update with Official Instructions
6/13/22
Hey all! Thank you all for the incredibly positive response to this guide! Now that Bethesda has updated to the patched version, Interkarma has written up some official instructions on getting DF Unity running through Steam. Please give his steps a try first!

If for whatever reason the official method doesn't work for you, I can confirm the steps in the guide here still work as a backup. Happy dungeoneering!
Introduction
The following is the original guide as provided at the launch of Daggerfall on Steam in April 2022. This method still functions but simpler alternatives have been found and added to the preface of the guide.

Want to replace the vanilla 1.0 Daggerfall experience from Steam with the objectively better Unity port? Of course you do! Here's how.

The original steps to set this up were found courtesy of user Isais1239 on Reddit, so all credit should go towards them. I'm merely putting it here for ease of anyone else that might not have found it!
Important Links
The Process

You're all set! The Unity port should now launch from Steam instead of the DOSBox version.

Arcion Holy Windmaster May 14 @ 11:56am
trying to do steps with the offical patch for steam edition, but some idiotic message saying, to find a version for your PC check software publisher im like what?

Torah Kystman May 12 @ 6:46am
For some reason in Daggerfall Unity I have trouble hitting an enemy (the original game does not have this problem). Also, I wasn't given an ebonite dagger(

Mardoin69 May 9 @ 10:02am
@Khenti-kheti....there's also some controls improvements but, otherwise no...mainly just graphical improvements and bug fixes.
@Vernai....I wouldn't recommend using Vortex...I've seen lots of bug issues being reported with it being used. Follow this guide and you should be golden with mods added. I personally add the DREAM mod and some of it's recommendations.

Vernai May 6 @ 11:01am
Is there a way to play with daggerfall unity mods via vortex with this setup? Because in vortex it says it requires daggerfallunity.exe, but since the names are different it doesn't recognize them.

Khenti-kheti May 5 @ 6:30am
Is there any other major difference between daggerfall and daggerfall unity besides graphics improvements?

☢LordMiki☢ May 2 @ 1:39am
all is good ,but still when i launch normally it is launching default game not unity. If i want to play Unity i still have to click every time on unity exe

Mardoin69 May 1 @ 9:55pm
Should also note in the directions for people to change game properties in steam and disable automatic updating by steam for the game. One way to do that is set it to; 'Only update when I launch game' AND 'NEVER allow background downloads.' This will keep steam from trying to overwrite any files.......so long as people don't use the 'Verify Files' option. Otherwise, steam COULD end up overwriting all your work to modify it. Another option would be to make a separate install of Daggerfall in another place on the PC. I create a folder on C:\ named 'MyApps' and then subfolders for each game I want to modify. Then just create desktop shortcuts to the modified exe's. Ofc, this won't enable steam achievements if that's what people are going for.
< >