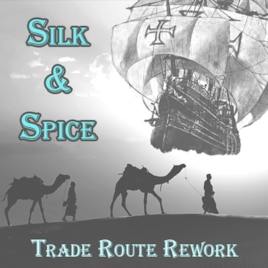 Alf.Net
Offline
See all 21 collections (some may be hidden)
You need DLC to use this item.

This item has been added to your Subscriptions. Some games will require you to relaunch them before the item will be downloaded.
Description
Silk & Spice: Trade Route Rework accomplishes the following:

Why I made this mod:
Firaxis had the great idea of requiring Trading Posts to be established before being able to extend trade routes, only to then make the mechanic mostly worthless by providing very high base values to land and sea routes. On top of that, the way Sea Routes are designed break trade route balance.

This mod is my attempt to address that: a) you'll have more control over the development of your road networks in the early game; b) extending your trade networks inland feels more rewarding as you see them grow from localised to global; and c) direct links between two distant cities without intermediate trading posts (such as it may happen between two cities on different continents) will now require the development of more advanced civics and techs.

JNR's 6T Eras - Works fine! However, Sea Range info will not display in the tech tooltip or in the civilopedia. You need to check the excel screenshot to know when the bonuses to Sea Range trigger (you'll know it's working because the increased range will display correctly next to "Sea Route Range" when selecting a trader unit).

Other notes:
My Mods:
Age of Capital
Popular Discussions View All (1)

The_Peoples_Vengeance Apr 26 @ 2:46am
I've been wanting a mod like this for years! Makes for much more realistic trade networks (especially in multiplayer) and adds a whole new layer of strategy in the early game. This is genius and absolutely I love it

Alf.Net  [author] Apr 16 @ 8:52am
@Orionox thanks for asking, as I just learned my mod is not compatible with Infixo's Tech Tree UI mod.

This mod does work with JNR's 6T Eras, but the "+X Sea Range" info will not display in the tooltip for the appropriate civics and techs. The bonuses will still trigger though. You'll know this by checking "Sea Range" when selecting a Trader unit.

There could be balance issues when using both together, but that's a matter of playing and finding out.

Orionox Apr 16 @ 12:18am
does this touch tech/civic trees at all? I want to know abouut compatibility with mods like JNR's tech tree mod