Store Page
American Truck Simulator >  Workshop > MrOverfloater's Workshop
This item has been removed from the community because it violates Steam Community & Content Guidelines. It is only visible to you. If you believe your item has been removed by mistake, please contact Steam Support.
This item is incompatible with American Truck Simulator. Please see the instructions page for reasons why this item might not work within American Truck Simulator.
Current visibility: Hidden
This item will only be visible to you, admins, and anyone marked as a creator.
Current visibility: Friends-only
This item will only be visible in searches to you, your friends, and admins. 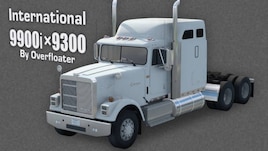 MrOverfloater
Offline
See all 63 collections (some may be hidden)

This item has been added to your Subscriptions. Some games will require you to relaunch them before the item will be downloaded.
Description
International 9900i edited to look like a 9300.

I replaced some of the truck's parts with my own models. Including the hood, cab front, visors, mirrors, battery boxes.
The interior remains mostly the same as the 9900i, minus the adjustments necessary for it to fit the new cab shape. Those would be new door models, and new upper dash. I have not used any references for those, they're improvised.

©Oxferd®Gaming™ Jun 21 @ 3:30pm
@SILVER
I created a mod that works for MrOverfloater's International 9900i×9300 truck mod
All my mod does is edits existing engines and transmissions with custom specs
And it also puts existing engines that Zee and Kriechbaum created for trucks that may not be supported by the main mods.

(Note: For Zee's engines I did not use his files, all I used was his .sui files and created the custom specs for both his N14 and 3406E engines for Kriechbaum it includes both custom and stock files)

donat.p Jun 19 @ 5:24am
nice truck, any plans of adding slots to front bumper for lights ?

©Oxferd®Gaming™ Jun 13 @ 7:36am
I guess so, I don't remember the truck having those parts must be new parts to be worked on