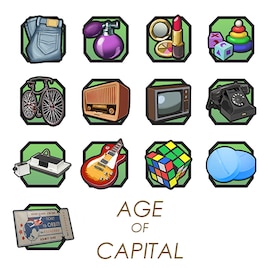 Alf.Net
Offline
See all 26 collections (some may be hidden)
You need DLC to use this item.

This item has been added to your Subscriptions. Some games will require you to relaunch them before the item will be downloaded.
Description
Age of Capital adds 9 new luxuries (manufactured goods) to the game and changes the existing four (Toys, Jeans, Cosmetics and Perfume). It aims to recreate the impact of manufactured goods in the wellbeing of human populations, starting in the Industrial Era. Goods created by inventors (Great Engineers) and entrepreneurs (Great Merchants) gain the upper hand in later eras in the maintenance of satisfied populations. Bonus resources are made more relevant to the Ancient and Classical eras.

A longer description of the changes is available here: https://forums.civfanatics.com/threads/age-of-capital-new-version.676338/

Consequences of these two changes:You’re likely to experience higher amenities than normal and an easier time achieving Happy or Ecstatic status in the early game and in your first few cities, thanks to the +1 from Bonus resources. However, as your population increases or you settle new cities, the need to access luxury goods will be increasingly felt.

Unlike Luxury Goods, you can’t simply conquer your opponent and keep the goods to yourself. If the Civ that created a manufactured good gets destroyed, all copies of that manufactured good are removed from the game. Doing so has the potential of causing widespread unrest on any other Civ highly dependent on those manufactured goods (you may take that as a warning… or as a suggestion).


Loyalty Changes:
Ecstatic cities now have +8 loyalty (up from +6);
Unhappy, Unrest and Revolt cities have -8 loyalty (down from -6);
Happy and Displeased cities remain at +3 and -3, respectively.

NOTE: Only citizens can cause external loyalty pressure. This hasn’t changed. Still, by increasing the loyalty penalty from low amenities, your cities are less capable of enduring pressure from citizens in foreign cities with their jeans and fancy gadgets. Think 1980s on the “wrong” side of the iron curtain.

Compatibility, other notes, etc:
Only Gathering Storm should be required, but I play with both expansions, all DLC, Leugi’s Monopoly++ and p0kiehl’s Luxury Resource Variety and Darker Dark Ages by default. A lot in this mod has been designed or tweaked with those enabled.

I haven’t had any issue with several popular mods which add new luxuries, such as Civitas Resources, Latin American Resources or Sukritact’s Resources and Oceans.

This mod should also work as an indirect buff to tall play (+1 Amenity from bonus resources is particularly impactful in the first handful of cities) and Amani (due to more potential amenities from city states).

Alf.Net  [author] Apr 23 @ 12:59pm
@jht_89 It should with most mods, as it doesn't require me to change the values individually, it's a +1 applied to any resource classified as "Bonus". The only reason I can think of is if a resource mod has a (very) high load order. But it works just fine with Civitas, Latin American and other popular ones.

I'm using Civitas, Wetlands and Latin American in the screenshots.

jht_89 Apr 23 @ 12:12pm
Do the bonus resources added by other mods (for example CIVITAS Resources Expanded) provide amenities like base game ones do?

Alf.Net  [author] Apr 14 @ 4:32am
@srkgt1 The other version is back on the old page. Unsubscribe from this one and resubscribe to that one.

I just realised I had already deleted most of the stuff that was meant to be causing issues from the old version. I had no recollection of that.

Alf.Net  [author] Apr 14 @ 3:55am
@srkgt1 Were you using my old mod? I didn't consider people might be using it tbf as that was meant to be broken. Let me know if this is your case.
---
If you mean that you can't load an old save after turning this mod on, then keep in mind that this mod is set to only work with new saves. HOWEVER, subscribing to new steam items which require a new save shouldn't have any impact on current saves (it just means it can't be loaded to current saves). But if this is the case, try going to "Additional Content" and disabling my mod. See if it helps.