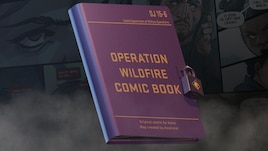 Ansimist
Offline
See all 9 collections (some may be hidden)

This item has been added to your Subscriptions. Some games will require you to relaunch them before the item will be downloaded.
Description
Do you remember official CS:GO comic? No? It is probably because the last opportunity to read them in-game was in the hands of those who bought Operation Wildfire many years ago. The comic is still located inside game files, but they are inaccessible for common players. With this map you can dive into the past and find out what happened to the Phoenix Compound, who their leader is, and what they did to the daughter of Booth – the main supplier of “Skins” in CS:GO.

Unique way to learn the story
The map is a book, designed as a journal of old operations, with a unique and beautiful animation. You'll go back in time and explore a part of CS:GO history that was once forgotten in a new way. You can read the comic alone or with friends, arguing over who will turn the next page!

Storyline
The comic was taken from Operation Wildfire's Gemini campaign, which was released in 2016 and tells the story of the Phoenix unit's commander-in-chief, Valeria, and her entourage. Parallel to the events of the comic book, players become participants in the Phoenix compound in three cooperative missions that unfolded on the official map from Valve.

How to read
Since reading books in a shooter isn't exactly comfortable, use the weapon zoom or noclip to get a better look at the text.