Store Page
Don't Starve>  Workshop > The Tiddler's Workshop
This item has been removed from the community because it violates Steam Community & Content Guidelines. It is only visible to you. If you believe your item has been removed by mistake, please contact Steam Support.
This item is incompatible with Don't Starve. Please see the instructions page for reasons why this item might not work within Don't Starve.
Current visibility: Hidden
This item will only be visible to you, admins, and anyone marked as a creator.
Current visibility: Friends-only
This item will only be visible in searches to you, your friends, and admins. 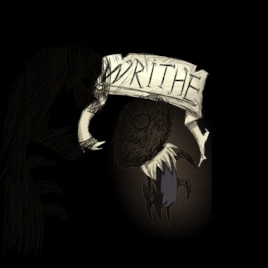 The Tiddler
Online
See all 125 collections (some may be hidden)

This item has been added to your Subscriptions. Some games will require you to relaunch them before the item will be downloaded.
Description
Finally updated!

Added compatibility with Up and Away (Thank you rezecib for doing that because I was too lazy to. I did none of the work)
Also made it so Writhe can no longer drag-click with tools to use them.

My second ever mod character, brought back to be released! Also the inspiration for my now abandoned Wurbert character.

Writhe is one of the shadow creatures, but he was mentally challenged, and could never fit in. So the others bullied him, trying to kill him off. Maxwell pitied Writhe, and defended him best he could. As he grew weaker, his last option was to send Writhe out into the open world, as far away from the other shadows as possible. Writhe sees Maxwell as his father figure.

STATS:
-Health =120
-Hunger = 180, and can only eat meat and nightmare fuel.
-Sanity = 1, and constantly drains.
- Short vision
-Can't equip any hand-slot items due to him having blades for arms. Instead he has the armguards listed below.

+Walks 1.2 times normal speed.
+Teleports a short distance when attacked.
+Attacks deal more damage over time. Instead of attacking once, he jumps into the air and wildly slashes at enemies. While he does more damage, this can not be interrupted and leaves him vulnerable. He also does lots of damage unarmed.

Eating nightmare fuel will give back:
1 sanity
34 health
6 hunger

Items:
Daddy's Spare coat: The dapper coat Maxwell wears in adventure mode! While wearing it, Writhe will stop losing and gain sanity during the day, and the sanity loss during night is slowed by a lot.

Sack of Helpful goods: A sack that spawns next to him when a new game starts. Gives 3 charcoal, 2 meat, and the Divine-O-Pones in adventure.

Divine-O-Phones: Headphones he only gets in adventure mode. Not only do they tell you where the things are, you can also make them play music by right-clicking on them while they're equipped.

Rather Plain Armguards: Works as a mining pick and axe. Mines at 20% speed and chops at 30%. Very slow!

Kingly Armguards: Works as a mining pick, axe, hammer, and shovel. Mines at 50%, chops at 60%, hammers at 40%, and gives an extra 18 damage to your attacks. Requires Alchemy Engine

Handy Man's Maces: Works as a mining pick, axe, shovel, and hammer. Mines at 70%, chops at 80%, and hammers at 60%. Gives and extra 24 damage, and also functions as a divining rod. Requires a repaired Pseudo Science Station to craft. So you need to go to the ruins!

Flamey-Wamey Thingadoo: A long-lasting torch. Breaks after running out of fuel. You can also shoot fireballs at enemies to ignite them, but this uses a lot of fuel.

Mole-Whacker Mollet: Acts as a very weak hammer. Can also be used to whack moleworms. and pick them up to make the rain hat. Only available with Reign of Giants.

Sticky Snatchers: Act as a bugnet. Simple as that.

Known issues: If you quit and rejoin a save while wearing the Divine-O-Phones, you have to take them off and put them back on for the music to work.

For some people, the game tends to reload the mod assets until the game oeverloads and shuts down (Or something like that). Downloading
http://forums.kleientertainment.com/files/file/775-memspikefix/
will fix this. Remember to enable the MemSpikeFix in the mod menu, or else it won't work! Sorry, I just don't have the time to spend weeks re-writing the entire mod.
Popular Discussions View All (2)

TheTrueSoulBamboo Aug 21, 2019 @ 5:56pm
also, like me, he could be autistic and banished for being autistic.
new lore for waithe

Gigglybug75 Jun 17, 2019 @ 8:54pm
also - idea for his weapon, he could start with the shadow sword or be able to craft a shadow gun/bow or possibly some sort of control device that lets him use shadow creatures the same way Webber uses spiders

Metal King Apr 3, 2019 @ 5:38pm
something nice would be some way to hold Umbrellas and Parasols. I got rekt after day 2 because it was raining. My sanity drained stupid fast and a Terrorbeast killed me.

The Tiddler  [author] Jan 15, 2019 @ 1:56am
I've fallen out with the game and likely won't be touching up on the mod. I also don't have the raw textures anymore which means to make him compatible with Shipwrecked would require me to remake them from scratch (or else he'd become all blocky from texture compression). So sadly that'll never happen.
< >