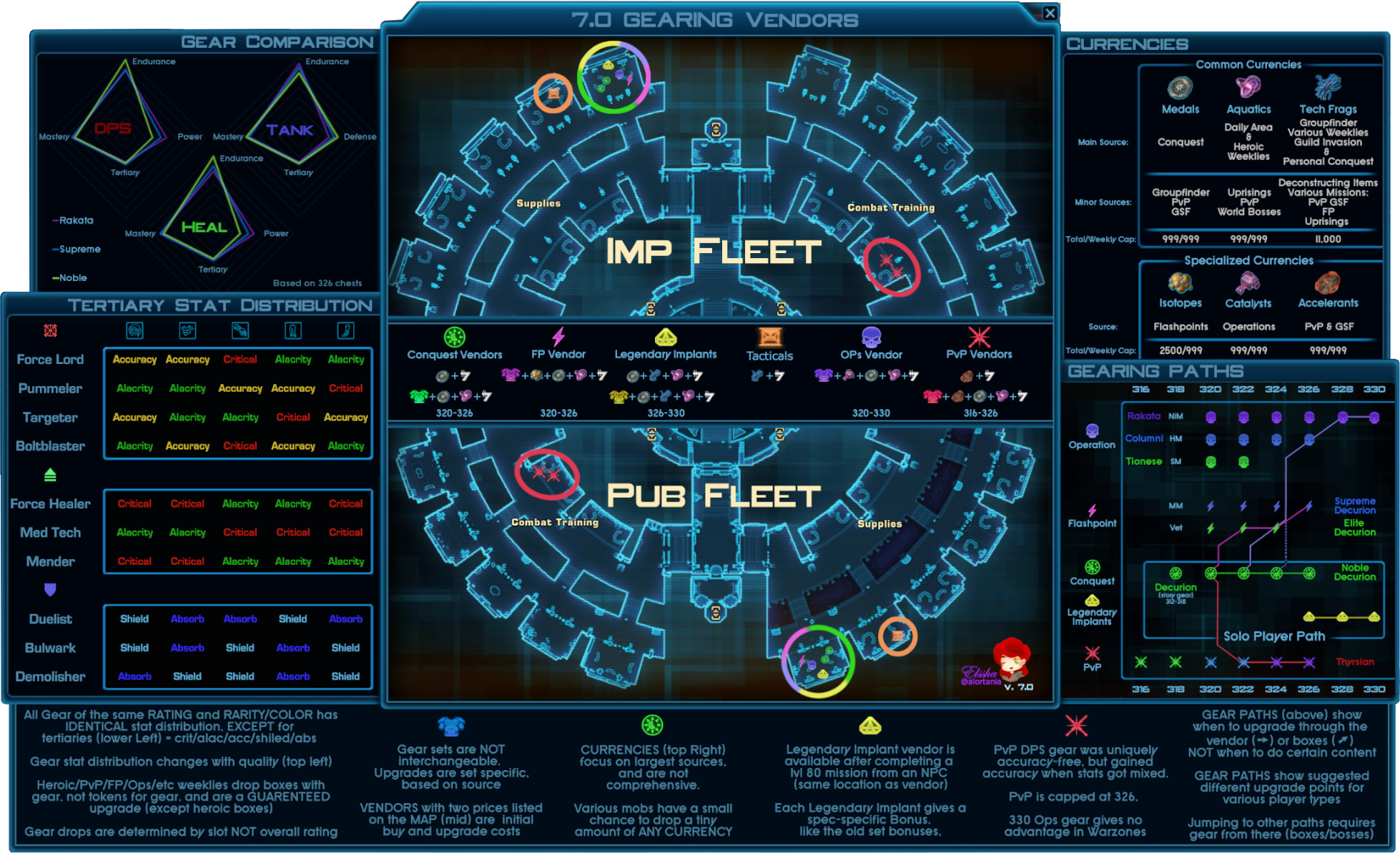 7.0 gearing master infographic has a lot of intel packed in, so I’ll briefly point out the various sections with additional info to help effectively use the graphic.

This is a comprehensive gearing infographic, with a different one for solo players with a lot of the extraneous information removed to prevent confusion.
Gear Comparison 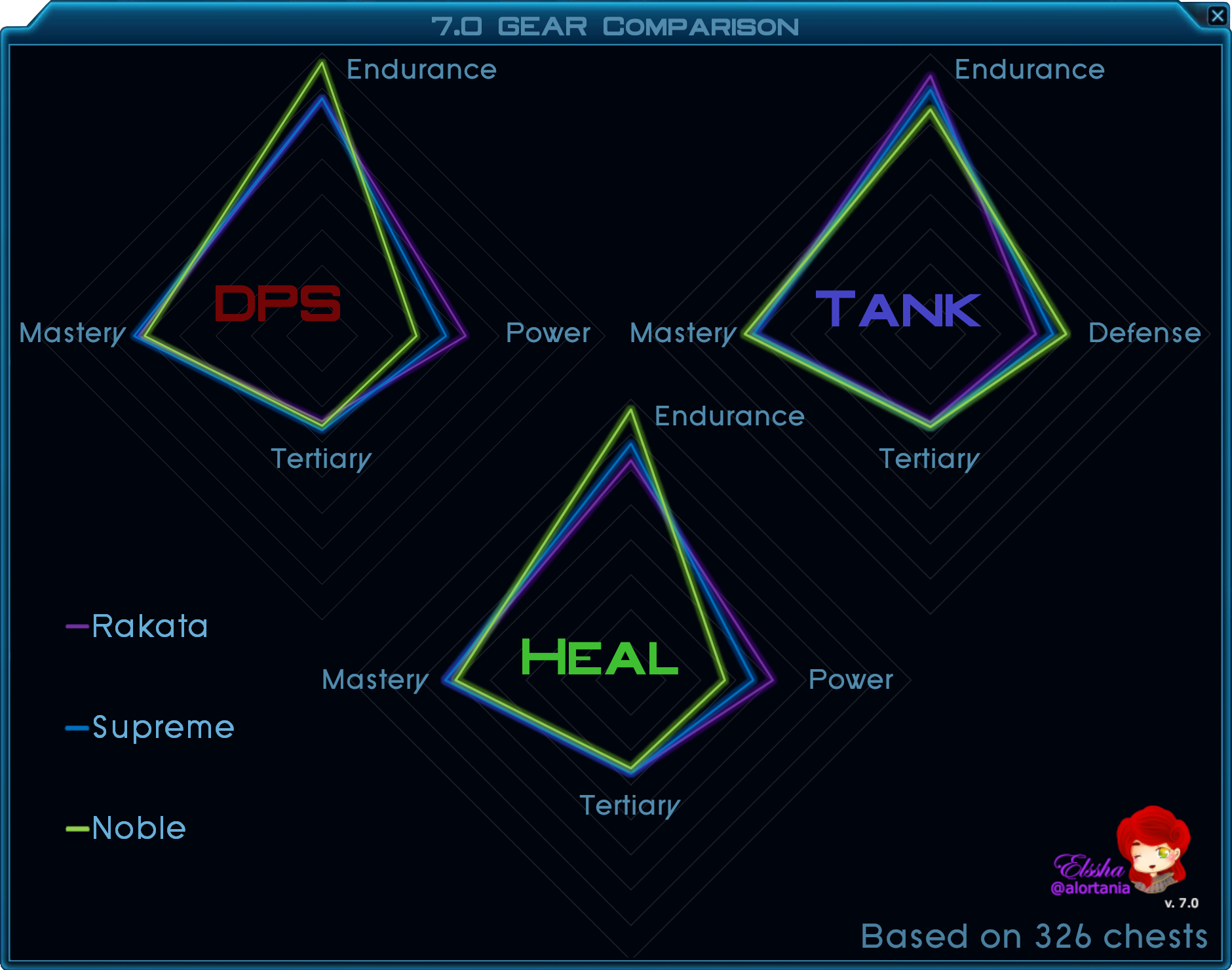 The comparison on the top left of the master infographic shows the stat allocation differences between green, blue and purple gear.

The differences are NOT very big, with the main difference being green gear sacrificing Power for Endurance (health) for DPS and healers (sacrificing Endurance for Defense for tanks), which generally makes players sturdier, if slightly weaker.
Note that all gear of the same rating and color is identical, stat-wise, with the only difference being the tertiary stat found on that piece. 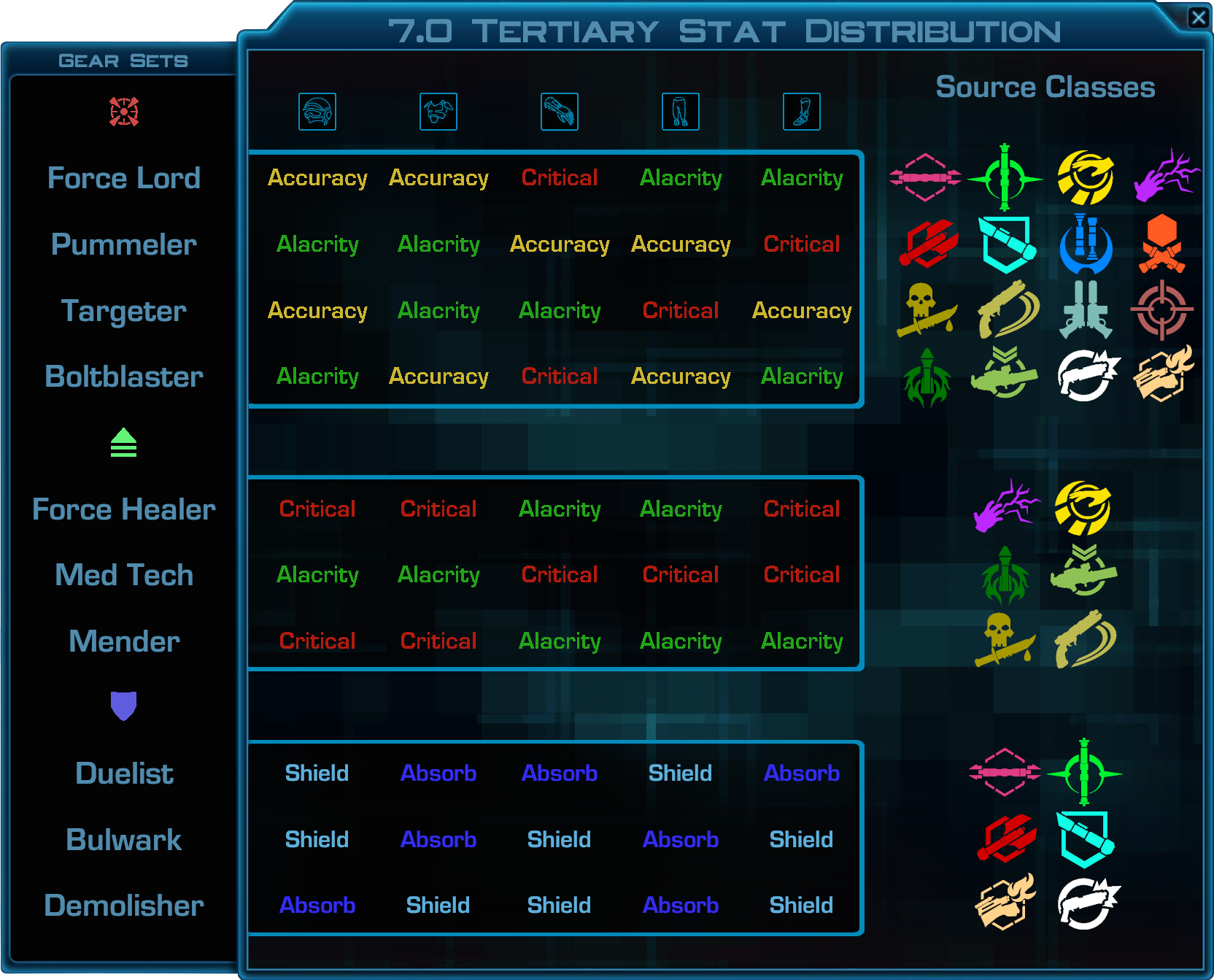 The sets drop based on base class of the selected loot discipline (i.e. all Sin/Sorc/Sage/Shadow DPS specs will drop Force Lord, while Jug/Mara/Guardian/Sent DPS will drop Pummler, etc).
The slot they drop from are up top, with belt/bracers not having any tertiary. The left side (ear, implants, relics) are not spec-dependent.
The Classes that get these gear drops are depicted on the right of the detail (NOT included in the master), and below I’ve included my class details where you can cross reference the new class symbols with the classes they now represent (and their various specs). 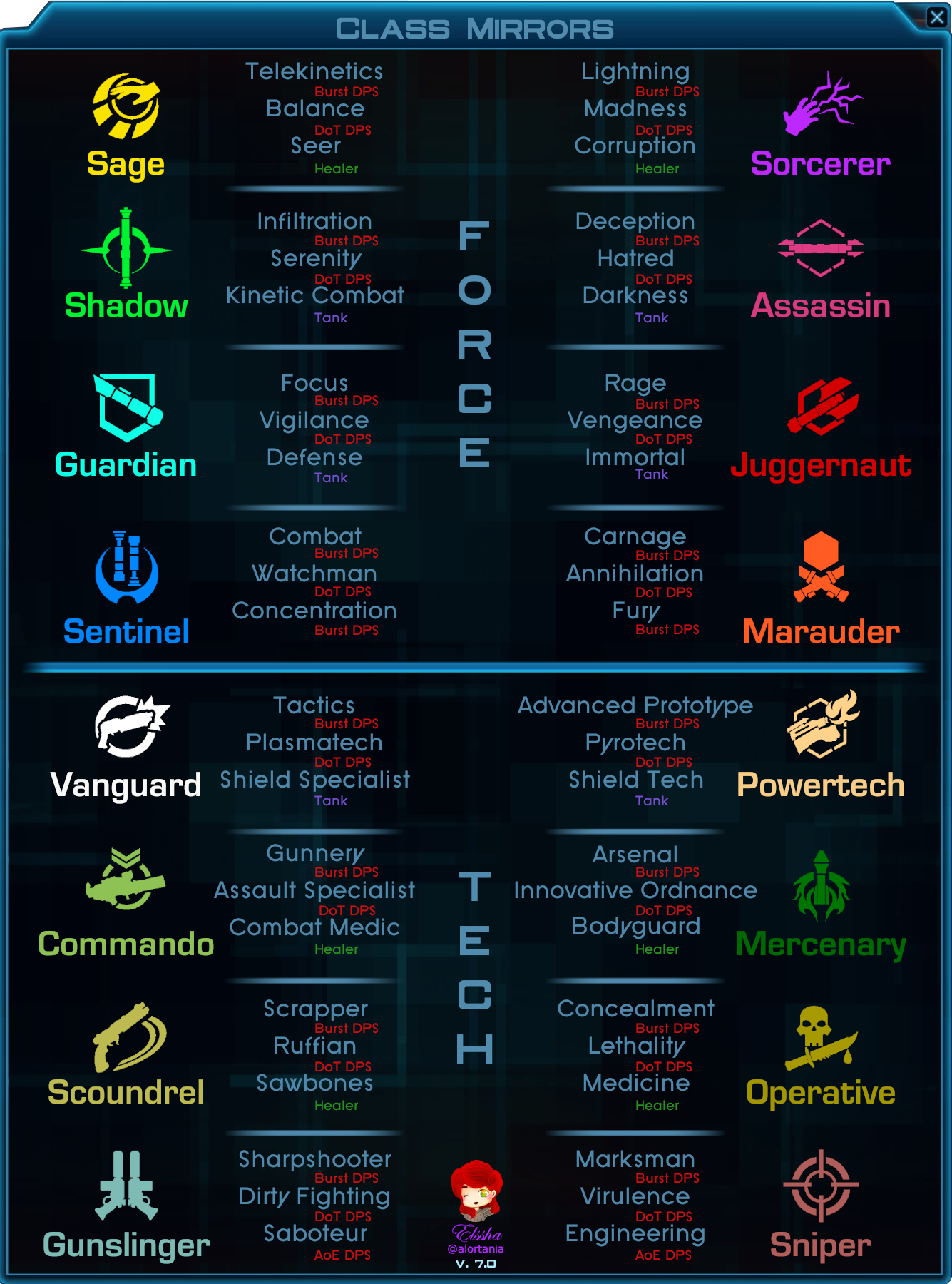 Vendor map
In the middle, most obviously, is the map of the two fleets, with the vendor locations pointed out. 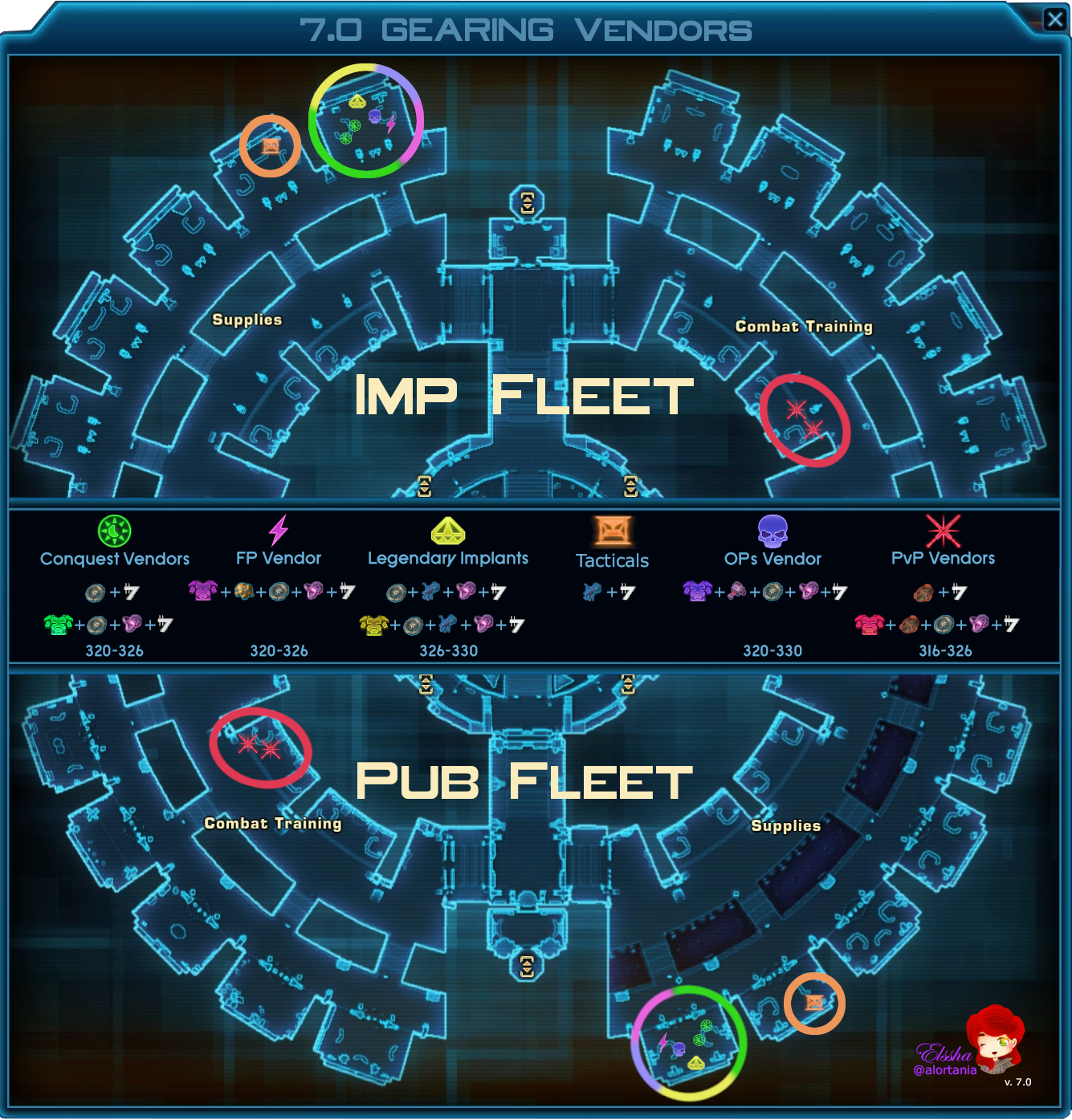 In the center, the various vendors are listed, along with the gear ratings associated with each path, and the currencies used for each. Vendors with two costs listed are the initial purchase price and the upgrade costs; with the purchase most often happening on a separate vendor (all except the implants).
The vendors use different amounts of Medals and Aquatics, with the non-conquest paths needing significantly less to upgrade due to the requirement of the special currency.

Currencies
The currencies used on the vendors are detailed in the top right, with their various sources (though these are NOT comprehensive lists) along with the weekly and overall caps for each currency. Tech frags are the only current currency without a weekly cap, meaning that besides holding more than 11,000 at a time, you can earn as much as you want each week. The others will block any additional acquisition beyond the 999 cap, even if you spend some that week after earning them. 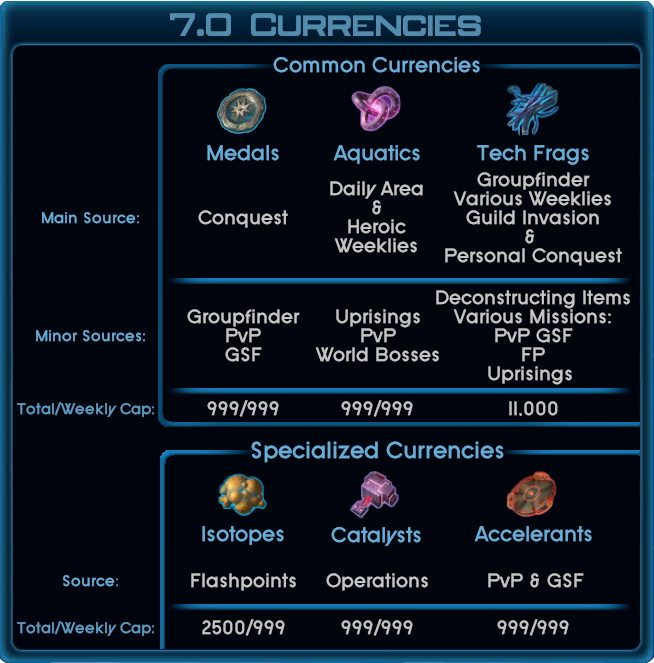 Three of the currencies are specialized, and come from only one type of content; Flashpoints, Ops and PvP (Warzones/Arenas and GSF). They are also only used to upgrade gear from that same type of content.

The other three currencies are more general, and drop from many places and are used in multiple gear paths. All paths require various amounts of Medals and Aquatics, while all players will want to buy the Legendary Implants which also cost Tech Frags. These are also required to buy Tacticals, and other non-gear items.

The main/best source of Medals is completing Conquest.

The main/best source of Aquatics are Daily/Heroic weeklies, along with Priority Targets (world boss weekly).

Gearing Paths
Just below Currencies are the gearing paths, which require a bit more explanation.

Gear cannot cross over; you cannot use gear of one type (say Columni) and upgrade it to a different gear type (say Rakatta or Noble Decurion). On these paths, this means vendors or drops from bosses/boxes can only go to the right, increasing in rating.

The various gear names are listed, along with the source and the levels available. The solo path is also highlighted.

The levels you get are based on the gear you are wearing, based on slot (NOT overall item rating).
So a MM FP item drop might be called “Supreme Decurion Bulwark chest”

Note also that left side (ear, implants, relics) CAN drop one tier higher than the content in PvE. So you have a chance to get a Rakatta ear from HM (vet) Ops, or a Supreme Decurion relic from Vet Flashpoints. 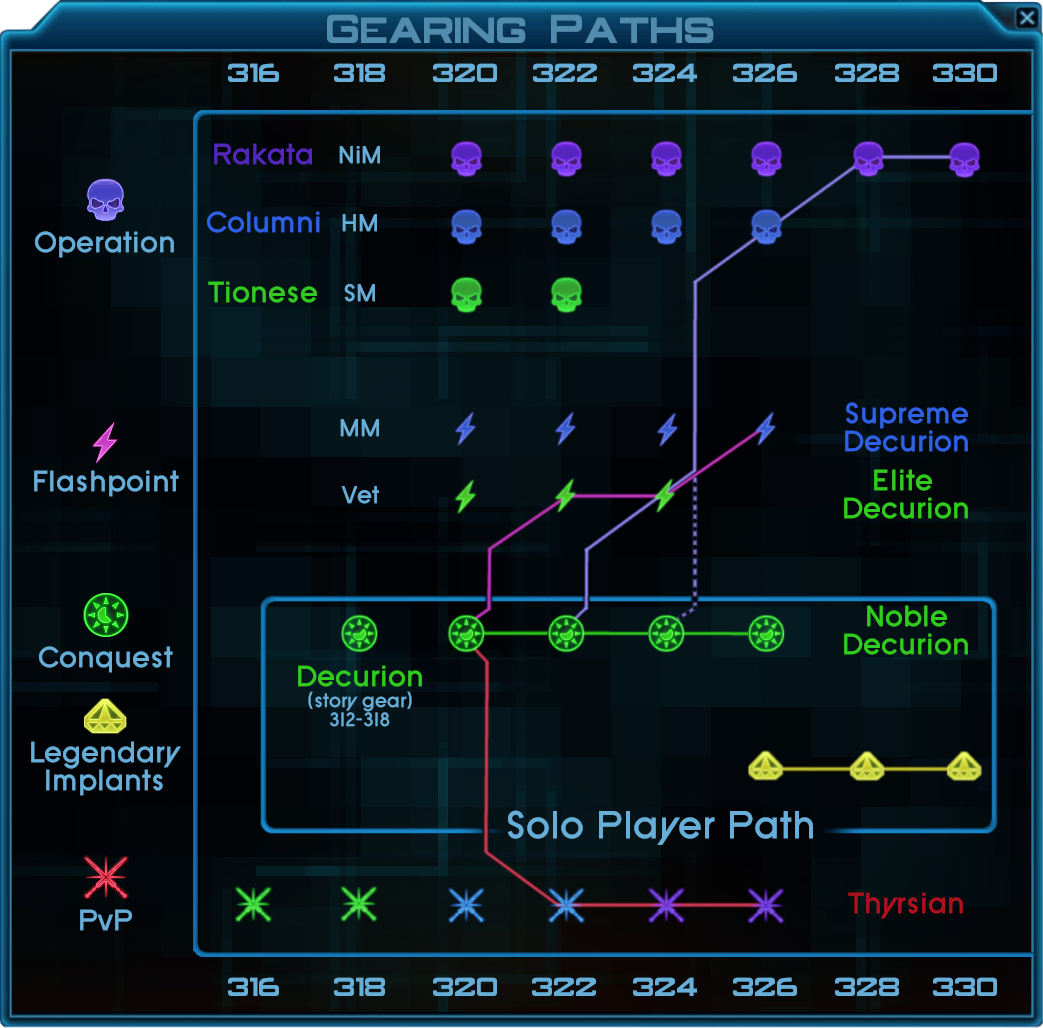 The lines on this are the suggested gearing paths for various types of players.

The diagonal lines show places where you can use stored boxes to hop content types.

It is NOT when it’s suggested you start doing the content.

For all, it’s STRONGLY suggested to buy a set of 320 Noble gear as a starter set.

From there, solo players can continue upgrading that, reaching 326 greens.

Other players might use boxes from various places (Vet/MM Flashpoints) they have been doing to save currency (medals mostly) while upgrading gear.

The paths are merely suggestions, but in general you do NOT want to get difficult gear early, as the mat costs grow each level, so it’s far better to get easily/easier to attain gear before diving into upgrading it, as the specialized currencies (and medals) become choke points preventing further advancement.

A quick method has proven to be GSF, where every 2-4 games you get one box of gear and enough PvP mats to upgrade it a couple times. Especially for non-PvP’ers, this means they save a LOT of Medals and Aquatics while paying mostly in Accelerants they earned passively due to the boxes.

Elssha  [author] Mar 27 @ 8:06am
@smokey416 If you look at the Gear Comparison section, there's a graphic comparing green/blue/purple gear's stat allocation. Tertiary changes slightly, esp compared to Power/Mastery changes, but it does vary.

All gear of the same color and rating gear has the same stat distribution. Green gear has different max rating based on source (i.e. SM ops gear maxes at 322; Conquest 326).

Smokey416 Mar 23 @ 10:45pm
Great guide, but something I am not getting is how the quality affects a tertiary stat. So for example, is the accuracy of say a 320 green decorian head the same as a blue rank 20 columni head piece. Also, does the name of the gear type have an affect. (Such as Tionese vs decorian both are the same rank and quality.)

Thanks for any help I can get on this and please understand I know the endurance/power is different I am only asking about the tertiary stats such as accuracy and alacrity.