Greenlight > Software > Neojac's Workshop
Greenlight is being retired. For more information on how to submit games to steam, refer to this blog post.
This item has been removed from the community because it violates Steam Community & Content Guidelines. It is only visible to you. If you believe your item has been removed by mistake, please contact Steam Support.
This item is incompatible with Greenlight. Please see the instructions page for reasons why this item might not work within Greenlight.
Current visibility: Hidden
This item will only be visible to you, admins, and anyone marked as a creator.
Current visibility: Friends-only
This item will only be visible in searches to you, your friends, and admins.
Atavism MMO Creator
Description Discussions4 Announcements8 Comments224 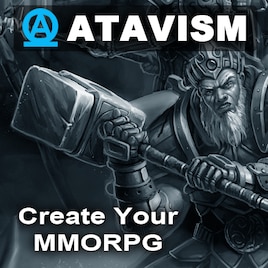 Atavism
Offline
See all 19 collections (some may be hidden)

We are now getting ready to release Atavism on Steam Store for those waiting for it. You can see it now in coming Soon section. It will be released fully tomorrow, 20 January 2015. Cant wait to see what wonderful world everyone will be making with Atavism.

Our main goal was always to help other indie developers get further faster. As you all know it's allot of work and time for a small indie team to bring a product to live. With some of Atavism Features we hope to speed up that process. One Developer using Atavism now seems to be moving forward at a decent speed after they move over to using Atavism. They are the team behind the MMO called Divergence Online. They have been working with Atavism for a while now and has started posting some progress videos.

They have also been featured on MMORPG in a article if you want to read more:
MMORPG Divergence Online Article [www.mmorpg.com]

Our hopes is to see more indie MMO games like this with unique ideas moving the MMO genre forward using Atavism making it possible for Indie Developers to enter the MMO market which until now has been dominated by big corporations with lost of money to back them.

Introduction
Atavism opens up the development of 3D virtual online worlds and MMORPG games to everyone regardless of programming knowledge or artistic ability. Integrated with the Unity engine as the client, developers now have direct access to one of the highest anticipated MMORPG engines in the market.
Focus on developing the game, not the programming, and have a prototype or full game up within a few weeks, even if your team is very small. You don't need to have a million dollar budget anymore to develop a MMO game as we have already done most of the heavy lifting with pre-designed plugins for every system, all you need to do is setup what stats you want to use with them. If you really want systems of your own you can also code your own plugin systems and even share or sell them to other developers who are using Atavism.

What sets us apart from other engines is that we have a open plugin system already done with all the basic MMO systems you will need to get up and running within a few hours. You also get the server software which allows you to setup your own servers anywhere you want and give you full control with out any royalties or monthly subscriptions. Using Atavism as the back end server system and Unity as the front end client we have the best of both worlds where we have a solid networking system to allow thousands of players into one world while using the super advanced graphics rendering system of Unity as a client. Even non-programers can use Atavism to bring their ideas to creation with a easy drop down system.

Key Features
As we have been working on this we have had over 150 Development Companies test and use Atavism already in the closed Alpha release to polish and make sure Atavism meets the needs of what game developers want from a engine like this. With that we have already developed over 18 different plugins that allows you to customize your game easily without any coding and linked them into a Editor that you open up in Unity for easy access. Here is a list of some of the plugin features that's been developed.

With all these plugins we also have standard things like chat channel, combat , full inventory system and much more in Atavism. The best part is you can easily use and incorporate other assets from the Unity Asset store into Atavism which will expand it even further for you (For example, there is a plugin developed by another developer for UniStorm which allows you to have a weather system in your game).

Our Mission
Our main goal was to develop a tool that allows developers to easily get their game going and add content to it with out spending months to just get a basic game play live. With what we have for you now anyone can create there own MMO game in a shorter period of time than what it would have normally taken.

Zappedz Jan 20, 2015 @ 10:33pm
Oh damn, thanks for getting back so quick.
That makes my final decision a lot easier.
I'll probably pick up the software, work on it for a few weeks and send them the client to test everything out. A three man team to make a poopy game sounds like time well wasted to me!

Zappedz Jan 20, 2015 @ 9:33pm
Question, to play games that people have made with the Atavism MMO Creator. Will the people who want to test the game or just straight up play the game have to also purchase Atavism? I mean I would rather not have a few of my friends spend $70 to play a poopy game I made so I just wanted to check in advance before I chunk out $70 of my own on it

Atavism MMO Creator has been Greenlit and is now listed in the Steam store. For the latest information, purchase options, and discussions for Atavism MMO Creator, please see it on the Steam Store or in the Steam Community.
Visit Store Page
For more details Visit Community Hub
For latest discussions
If you really, really want to, you can continue to the Greenlight page. Information on this page may be out of date, since all the action has moved to the areas noted above.