Store Page
Insurgency >  Workshop > Қatka ♥'s Workshop
This item has been removed from the community because it violates Steam Community & Content Guidelines. It is only visible to you. If you believe your item has been removed by mistake, please contact Steam Support.
This item is incompatible with Insurgency. Please see the instructions page for reasons why this item might not work within Insurgency.
Current visibility: Hidden
This item will only be visible to you, admins, and anyone marked as a creator.
Current visibility: Friends-only
This item will only be visible in searches to you, your friends, and admins. 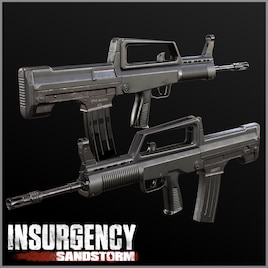 This item has been added to your Subscriptions. Some games will require you to relaunch them before the item will be downloaded.
In 1 collection by Қatka ♥
Katka's Insurgency: Sandstorm Ports

148 items
Description
The QBZ-97 from Insurgency: Sandstorm. Replaces the AK-74
REQUIRES THE SHARED RESOURCES PACK
Note: The Grenade Launcher does not appear in the weapon selection menu. It's because of the way I set up the GL system. The original GL model is not modified, instead, the new model is compiled into the weapon and only appears during sequences which require it to be visible.

Note 2: The optic rail model is shared between the AK-74, AKM and RPK. This means that other mods that also replace this model (a_modkit_06.mdl) might override the rail model in this mod. Also, the rail from this mod might look out of place on other AKM/RPK mods.