Store Page
Tabletop Simulator >  Workshop > Marina Valenheart's Workshop
This item has been removed from the community because it violates Steam Community & Content Guidelines. It is only visible to you. If you believe your item has been removed by mistake, please contact Steam Support.
This item is incompatible with Tabletop Simulator. Please see the instructions page for reasons why this item might not work within Tabletop Simulator.
Current visibility: Hidden
This item will only be visible to you, admins, and anyone marked as a creator.
Current visibility: Friends-only
This item will only be visible in searches to you, your friends, and admins. 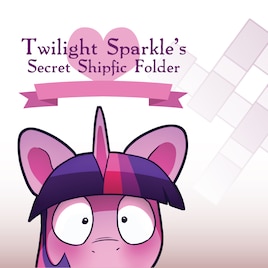 Marina Valenheart
Offline
See all 62 collections (some may be hidden)

This item has been added to your Subscriptions. Some games will require you to relaunch them before the item will be downloaded.
Description
Due to circumstances beyond my control, my hosting server is offline for the foreseeable future. I can't promise I'll get around to updating the workshop to use a new host. In the meantime, you can get the raw files from my Google Drive[drive.google.com].

In order to help fulfill Twilight Sparkle's dream of writing the perfect fanfic, you take turns expanding the shipping grid, joining new Ponies to the ever-more-complex network of relationships with Ship cards. If you are first to make one of Twilight's narrative Goals a reality, you earn the points for that Goal. You also earn shame for enabling Twilight's horrible penchant for shipping her friends, but nopony's perfect.

Starting from Fanfic Author Twilight in the center of the board, ship ponies in all directions until you lose your mind.

Or until someone reaches enough points from meeting Goal cards.

Cards with printed rules are spawned on the table next to the three decks.

Adapted by Shizuka Kamishima, I am not affiliated with the creators!

NOT UPDATE 2014-08-06: Version 1.0.3 has been released and is available at TSSSF's site, but unfortunately I do not currently have the time to commit to make changes to the card textures here.

STILL NOT UPDATE 2015-10-05: My server is down for the foreseeable future due to circumstances beyond my control. I also haven't been terribly interested in Tabletop Sim, and so have not updated the workshop's urls. The raw images for this deck can be found on my Google Drive[drive.google.com] until such time as I can update the save. You can also find related expansions that might have the core deck themselves.

Sorry for the disappointment!
Popular Discussions View All (2)

Creation of the cards.
Black Sheep

Tutorial Guy Mar 5, 2020 @ 11:30am
maybe it’s incorrect to advertise my similar mod on the page of the same (abandoned) mod, but still https://steamcommunity.com/sharedfiles/filedetails/?id=628630032

Segfault Jan 21, 2016 @ 9:20pm
Was avoiding doing this for a while, but since this is now unavailable. For anyone who still wants to play this. I suggest checking out the complete pack at http://steamcommunity.com/sharedfiles/filedetails/?id=385739435

MassacreHarp Aug 7, 2015 @ 8:18am
Not a fan of My Little Pony at all but the concept behind this game looks rather entertaining.