Greenlight > Games > Team ZANRAI's Workshop
Greenlight is being retired. For more information on how to submit games to steam, refer to this blog post.
This item has been removed from the community because it violates Steam Community & Content Guidelines. It is only visible to you. If you believe your item has been removed by mistake, please contact Steam Support.
This item is incompatible with Greenlight. Please see the instructions page for reasons why this item might not work within Greenlight.
Current visibility: Hidden
This item will only be visible to you, admins, and anyone marked as a creator.
Current visibility: Friends-only
This item will only be visible in searches to you, your friends, and admins.
Stardust Vanguards
Description Discussions2 Announcements10 Comments138 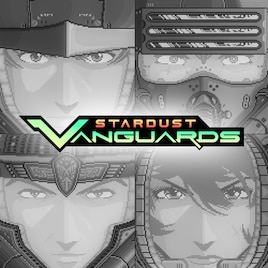 Team ZANRAI
Offline
See all 10 collections (some may be hidden)

View Stardust Vanguards in the store

Here's the link to the Steam Store Page! Thanks everyone for your continued support! <3

Stardust Vanguards was just green-lit tonight! Special thanks to everyone that's supported us, and we're really looking forward to seeing you all playing the game on Steam!

In the meantime, plenty of tweets on our Twitter account if you want to chat. And as soon as we pin down a release date we'll let you know!

Thanks again everyone! We're very grateful!

STARDUST VANGUARDS is a local four player game about precision mecha dueling all while calling for reinforcements in the style of 80s and 90s anime space operas. Your special ability is to call in allied squadrons and fleets to assist you on the battlefield. Random events occasionally occur throughout the battle, such as computer controlled space pirates launching massive surprise assaults on all parties involved. You may choose to team up with your rival players during these situations, or use these events as a distraction to kill off an unsuspecting commander. Of course, you'll have to deal with the pirates, too, since they can win the battle just like a player can. Central to Stardust Vanguard's core premise is fast-paced dueling with an element of strategy brought about through your ability to call in reinforcements.

The game has been meticulously balanced and playtested to make sure that the gameplay is tight, precise, and competitive.

Your pilot is equipped with a powerful energy sword and a very limited amount of ammunition. Bullets are a support tool in Stardust Vanguards, something to distract your enemies with and not necessarily something to rely on for kills. In addition to your weaponry, your machine is highly mobile and can dash away from other players or even right into them as a pushing attack, but be careful: your engines can burnout temporarily if you boost too much! You can also deflect bullets right back at enemies, so while bullets should be respected they can be used to your advantage!

Calling reinforcements centers on acquiring RP (reinforcement points). You earn RP for every kill you make. Tougher enemies award more RP while weaker enemies are worth a little less. On top of this, the kills your reinforcements make earns you RP, too. You can totally hang back and let them rack up kills for you as you wait to unleash more reinforcements, or you can risk your own well-being to help them push back the enemy. How you play is up to you.

There are multiple tiers of reinforcements based on how much RP you currently have and you can spend those points however you'd like by charging up with the "Call Reinforcements" button. So if you only wanted a small flight group to assist you, you'd only charge up for a quick moment, but if you wanted a large cruiser escort you'd need to charge up to max, assuming you have the points to do so.

Dying takes RP away, but you'll also gain RP slowly over time, so merely surviving will let you build up your forces. Special event ships also offer huge RP rewards for defeating them such as transport and supply ships. Of course, assassinating a special VIP in transit could max our your forces immediately.

We're just a two-man team and we're always happy to chat about any comments or suggestions.

Stardust Vanguards has been Greenlit and is now listed in the Steam store. For the latest information, purchase options, and discussions for Stardust Vanguards, please see it on the Steam Store or in the Steam Community.
Visit Store Page
For more details Visit Community Hub
For latest discussions
If you really, really want to, you can continue to the Greenlight page. Information on this page may be out of date, since all the action has moved to the areas noted above.