Store Page
Mortal Online 2 > Guides > Diphrael's Guides
This item has been removed from the community because it violates Steam Community & Content Guidelines. It is only visible to you. If you believe your item has been removed by mistake, please contact Steam Support.
This item is incompatible with Mortal Online 2. Please see the instructions page for reasons why this item might not work within Mortal Online 2.
Current visibility: Hidden
This item will only be visible to you, admins, and anyone marked as a creator.
Current visibility: Friends-only
This item will only be visible in searches to you, your friends, and admins.

Comments
Introduction
Due to extreme balance changes, this build is no longer up-to-date. I am leaving it up for reference.

Paladins in Mortal Online are magic capable heavy armor fighters. The dagger is a powerful weapon with brutal potential. Combine these two and you have a lethal combination capable of hunting down the strongest enemies, while having the utility of a full mana bar for healing and finisher magic. The focus was to have a fully functioning melee character which foregoes mana regen in favor of greater melee capabilities. This guide demonstrates example builds which can be adapted to your needs.

This build was adapted from my dagger mage build found at: https://steamcommunity.com/sharedfiles/filedetails/?id=2642886342

Playstyle
In contrast to the dagger mage, this build is designed to be a front-line fighter. The magic is secondary to your stabbing. With the speed of a sheevra, you should be more than capable of stickybacking enemies who are low HP and killing them with high fast damage with the chance at big weakspots.

The downside to this build over dagger mage or hybrid is that you do not care about magic regeneration. You sacrifice that by wearing heavy armor. The mana pool that you enter battle with is what you get, at the benefit of wearing much heavier armor.

The magic within this build has four primary uses:

1. Recovery - should you get low HP, back out of the fight and utilize bandages plus healing to return to full HP and get back into the fray.

2. Peeling - Throwing lesser heals/purifies on a focused teammate helps give them the chance at getting away. Throwing offensive magic on a pusher/diver is a great way to dissuade them from continuing their attack.

3. Finishing - Spells like mindblast, corrupt, outburst, and lightning can be used to kill a target from range. The most capable of these is mindblast, which generally will hit for 36. If you decide to specialize more into magic, you can use thunderlash at level 62 ecumenical spells.

4. Opener - Starting a fight with an offensive spell can be a great way to apply hard pressure and forces the enemy to react - or they die. A group of dagger paladins/mages can initiate a fight with a salvo of heavy hitting spells to hopefully kill at least 1 target.

Be warned, however; daggers and magic require a high level of player skill to be proficient in. The build is not what makes you lethal - you are. Experience with the mechanics of the class are what will make you effective.
Character Build
Clade:
Pureblood Sheevra

You can adapt this build to other clades, but it is specifically designed for Sheevra. I do not recommend using other races because they do not have the weakspot bonus, and their dex is too low for weakspots. I am also very partial to the Alvarin environmental gifts (fall damage, jumping, and swimming). Having those allows you to use terrain to your advantage over all other races.

The advantage of a minimum height Sheevra is it has the potential to re-roll to basically any other viable build. You can become a pure mage, a dagger mage, a dex/psy fighter, a mounted archer, a tamer, or any other number of niches. While less versatile than humans, Sheevra have a lot of options.
Action Skills
Shard 1: The Tanky Dagger Paladin

This variant prioritizes physical defense. It is capable of wearing steel/cronite armor.

This utilizes only 14 weight armor, but is better at surviving and has the addition of 100 archery for Best-In-Slot shortbows. Can be used as a budget mounted archer for PvP and PvE.

Sacrifices heavy armor training and some slight environmental utility to hold powerful pets. Requires another character for taming and transferring pets. Broker pets work, too. 79 CC + 0 advanced CC should be enough for level 125 turtles and razorbacks. Adjust your creature control levels to the specific pets you have access to.

Each of these builds have different uses. Shard 1 is probably the most effective at surviving, while shard 2 has the most PvE utility. Shard 3 is just degenerate. Please do not play as shard 3.

Some people might question the lack of blocking skill. This is a personal preference based on what gear you use. I personally use ironwood shields which are probably bugged because they do not receive a stamina reduction when blocking from the skill. If you plan on playing *without* a shield, drop survival for the blocking skill.
Clade Gifts
Clade gifts for this build are fairly straight forward. 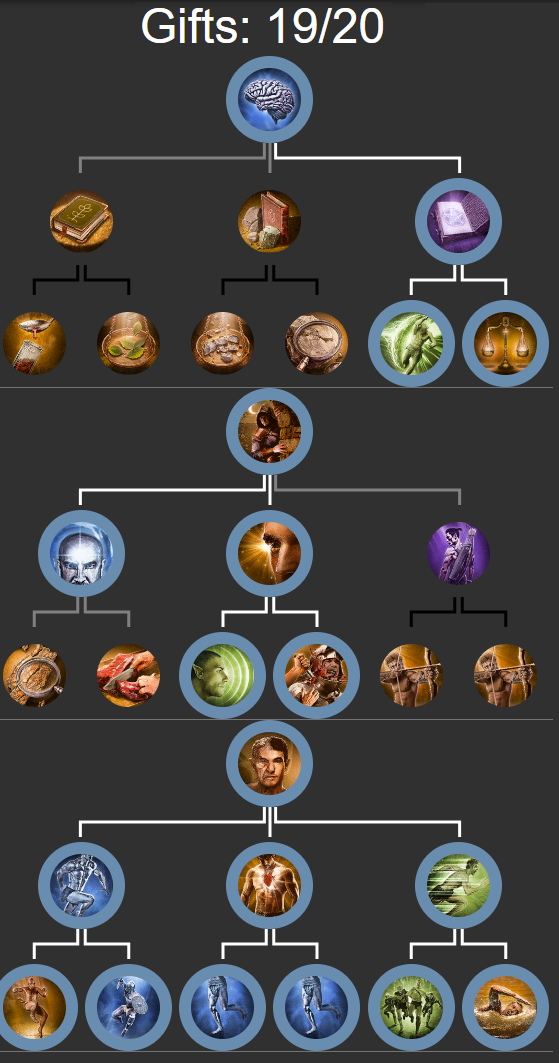 I have left it at 19/20 gifts. If you choose to do archery, get the +25 Bow Training gift. Otherwise your 20th point should be used at your discretion.
Equipment
Equipment is tailored around your specific build and what resources you have access to.

Weapon: The best in slot daggers are Tungsteel or Oghmium. You can use metal handles for maximum durability, or incisium/dense crepite for increased weakspot. The best coating material is platescales for durability, or placoid scales for weakspot. I personally do not value weakspot over durability as it really reduces the longevity of the daggers.

Armor: For a 14 weight armor set you can use bone/carapace. For a heavy dagger paladin you can use 23.81-24.29 (depending on str). This allows the user to wear full Mercenary plate of cronite with ironfur backing. Steel armor will require selective downgrading of certain armor parts for weight, but it is still possible wear mostly steel.
Spells and Reagents
Most of the versions of this build I have explained run 30 or 40 ecumenical spells. This allows for use of the following spells:

There is the option of raising ecumenical to 50 for magic reflect or 62 for thunderlash. If you decide to go this route it is probably best to take skill points out of survival.

A common reagent loadout for this build is 125 water, 125 calamine, 50 ichor, 50 sulfur, 50 nitre. If you have 40 ecumenical, throw in 25-50 cuprum.
Conclusion
A dagger paladin has the potential to be a murder machine, as well as one of the most survivable characters possible. Adapt the build to your needs. Nothing is set in stone, and the meta evolves. Do what works best, and do not be afraid to experiment. Hell, even feel free to substitute any other weapon over dagger (just be sure to not take the weakspot clade gift).

Big shout out to Mortal Data for being the best resource the community has ever had. Be sure to donate to his website.
< >
6 Comments

Mephs Aug 23 @ 5:52pm
Are these builds still viable? I'm interested in trying and can't decide between tanky or agile, seems like tanky is better overall but the agile build sounds more fun imo.

djurius Feb 4 @ 8:14am
nice builds as usual, well thought out and easy to follow