Store Page
TerraTech >  Workshop > Darvenstein's Workshop
This item has been removed from the community because it violates Steam Community & Content Guidelines. It is only visible to you. If you believe your item has been removed by mistake, please contact Steam Support.
This item is incompatible with TerraTech. Please see the instructions page for reasons why this item might not work within TerraTech.
Current visibility: Hidden
This item will only be visible to you, admins, and anyone marked as a creator.
Current visibility: Friends-only
This item will only be visible in searches to you, your friends, and admins. 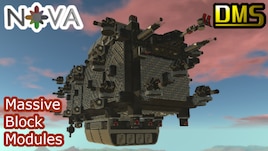 This item has been added to your Subscriptions. Some games will require you to relaunch them before the item will be downloaded.
In 1 collection by Darvenstein
NOVA

Darvenstein Military Shipyard has released several block modules optimized for building big spaceships. Instead of using thousands of individual blocks with thousands of colliders, this mod pack provides you with massive individual building blocks, therefore decreasing collider and AP counts, which in turn relieving your computer from intensive calculations for big builds.

This starter pack contains all the parts needed to construct the Ashford-class Frigate (some assembly required), which includes :

DMS ProgMat Armor Plates [HE, Power section]
Armor plates made with programmable matter capable of repairing itself. Drains a small amount of power when idle and considerably more when performing self-repair. Casually referred to as 'living metal', these armor plates are standard-issue for any ships constructed by Darvenstein Military Shipyard

DMS Ship Frame [HE, Standard section]
A sturdy frame to secure the structural integrity of spaceship hulls and modules. The ship's crew can also perform utility and maintenance duties via access hatches on both ends of this frame

DMS Naval Gyro [HE, Accessories section]
Massive gyroscope module to stabilize spaceships when entering a gravity well, as well as establishing a universal 'up' across friendly flotilla to better synchronize fleet combat movement. Due to the design being intended for spaceships, usage on smaller techs is strongly discouraged

DMS Naval Battery [HE, Power section]
Massive energy storage to provide power to all systems on a spaceship, install these modules in a stack for an even higher storage capacity

DMS Maneuvering Thrusters [HE, Flight section]
Powerful maneuvering thrusters for course correction and sublight movement. Due to the design being intended for spaceships, usage on smaller techs is strongly discouraged

Epstein Drive (ProxMod1) [HE, Flight section]
Originally invented by Solomon Epstein, this fusion engine has achieved a level of efficiency that was previously thought to be unattainable. The Epstein Drive was a vital technology that allows humans to colonize Mars, the Asteroid Belt, and the entire Sol System. This ProxMod1 model has been further enhanced with Proxima Dark to achieve FTL travel, allowing highly efficient interstellar transportation and marking the beginning of the Prospector's Age

NOVA is looking to recruit new and promising officers to join our ranks, visit our Faction Thread [forum.terratechgame.com]
< >
25 Comments

->Re-adjustment of all block modules' grade & rarity (for real this time)
->Torpedoes has an arm delay of 5 seconds to prevent them from exploding in your face. If a torp hits you before being armed, it will fall off to the ground, and will explode in 20 sec

zabuzabu8 Jun 2 @ 3:35am
This missile? But can you make a shield and repair field that will not break?

GrimReaper May 28 @ 11:18am
Maybe in the near Future a way to make the ship not use Better future gravity engine
Like a way to implemet a block that make the ship hover in plane and moves like a hover glitch is it posible plss?

Darvenstein  [author] May 27 @ 9:34am
is this your first time using unofficial mod?

read the desc carefully, you need CIWS from the TT forum

GrimReaper May 25 @ 1:23pm
Anyone got any idea how to asemble this to be able to fly?
Bc i cant at all
Is all cool but there No instruction and the Frigate place in workshop not works bc missing 2 items

Darvenstein  [author] May 5 @ 2:25am
if your scu is bugged, put a cab on the epstein drive (so now it becomes a tech), and then simply store the tech

eaterequalsvoid May 4 @ 12:08pm
@Darvenstein in the campaign if a block is unknown you can't craft it. My question is how am I supposed to get the Epstein drive into my inventory it is so big it doesn't want to go in.
< >