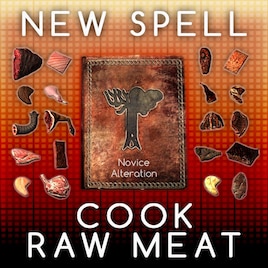 GyppiFX
Offline
See all 31 collections (some may be hidden)

This item has been added to your Subscriptions. Some games will require you to relaunch them before the item will be downloaded.
Description
This mod adds a spell to cook raw meat wherever you are and whenever you want!


FEATURES:
"Cook Raw Meat" is an Alteration spell of Novice level;
When used it gives you experience as a common spell;
It doesn't require "Salt Pile" to cook;
Cooks one piece of raw meat from your inventory;
Cheap to buy and to use;
It's a completely new spell;
Supports the base game (DLCs not tested).


WHERE TO BUY THE SPELL TOME:
You can buy the spell tome "Cook Raw Meat" from MANY mages\spell tomes merchants around Skyrim.

For example from: Farengar, the court wizard for Jarl Balgruuf the Greater at Dragonsreach in Whiterun or from Calcelmo, the elder mage of Understone Keep, in the city of Markarth.


MORE FREE STUFF:
Cook Raw Meat Spell: cook raw meat wherever you are and whenever you want without the use of Salt Pile => http://steamcommunity.com/sharedfiles/filedetails/?id=272512544

Check out my free software over www.xtreme-lab.net and my free game for Android: "Freeway Survival" => https://play.google.com/store/apps/details?id=com.xla.fws


PAID MOD:
This is not a paid mod, never was, never will be, you are free to download it, show it on video, have fun with or at it.
If you like this mod, check out the other free stuff I made, leave a "thanks" in the comments, share or give the mod a thumbs up! :)

POSSIBLE INCOMPATIBILITY:
This mod could be incompatible with other mods which adds items to mages\spell tomes merchants.

GyppiFX  [author] Dec 22, 2016 @ 6:58am
@Super Saiyan Daughter: I made this mod over two years ago but if I remember correctly it supports every type of cookable meat of the base game, not from the DLCs or other mods.

Super Saiyan Daughter Dec 21, 2016 @ 1:08pm
Will there be an update to include Deer Legs, Saber Cat and Wolf, Chicken Breast, Chicken legs and Hawk breast meats?

Melodysharm Nov 29, 2014 @ 10:29pm
Thanks for making the cooking easier! Now I can use salt piles more for alchemy instead of using them up for cooking meat.