Store Page
Stellaris >  Workshop > Sir Rolin's Workshop
This item has been removed from the community because it violates Steam Community & Content Guidelines. It is only visible to you. If you believe your item has been removed by mistake, please contact Steam Support.
This item is incompatible with Stellaris. Please see the instructions page for reasons why this item might not work within Stellaris.
Current visibility: Hidden
This item will only be visible to you, admins, and anyone marked as a creator.
Current visibility: Friends-only
This item will only be visible in searches to you, your friends, and admins. 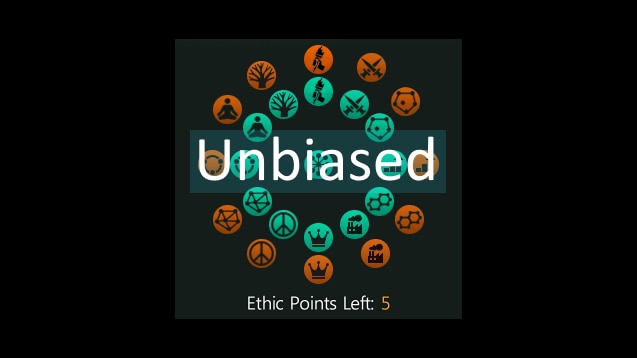 Sir Rolin
Offline
See all 18 collections (some may be hidden)

This item has been added to your Subscriptions. Some games will require you to relaunch them before the item will be downloaded.
Description
By request of ClockworkCorvus I made a Patch for E&CC 3.2 to make the ethics roughly unbiased, which was almost already the case, but slightly biased.

Due to people not knowing, this doesn't change any GUI, so if a patch for E&CC works (f.ex. UIOD & E&CC patch) then it works with this too.

This is NOT a standalone mod, place it underneath the E&CC mod, like so:
Other mods
< >
21 Comments

Sir Rolin  [author] Mar 29 @ 2:15pm
For those that doesn't read the description, I have removed the fixes in my mod, so that it works with DinyS1705's Unofficial Patch, that uses the fixes I made. Link in description and underneath this message ^^

DinyS1705 Mar 29 @ 1:28am
Ive made a "fix" patch thingy with the original ethic weights and more fixes like the politicians and temples. https://steamcommunity.com/sharedfiles/filedetails/?id=2786349143

Troll Mar 28 @ 11:00am
First off, thank you for your fixing, but...
You NEED to update the buildings file, in particular the entries for planetary administration and higher versions. The original mod uses the old administrators instead of the new politicians and that causes the issue of no jobs being generated for that category.

But other then that very nice update and also great coding/indenting. I wish Petruxa would base the new update on your files as they're so much easier to look into :-)

joakim.westergaard Mar 26 @ 10:51pm
Yeah, updating E&CC is a pain due to (sorry to say) messy coding. You take a look at the buildings file which doesn't follow vanilla at all...

Sir Rolin  [author] Mar 26 @ 4:33pm
@DinyS1705,
Yes it did help me, I have used the last 1½ hours fixing every pop job, including the order in which they appear in the files... didn't make it easier that it was scrambled. changed admin cap into edicts funds for the NEW jobs, changed it into planet stability at 1/5th the rate on vanilla overriden jobs. also fixed some of the job weights, which was looking for the wrong jobs.

I tried to keep it reasonable, but know that some of the tooltips are going to be wrong. (ex: clerks don't give admin cap with federal state no more, it gives stability)

I haven't gone into the civics yet.

So I gues it "works" but youre lacking a lot in unity if u play like this and admin cap is non-existant wich triggers AI to go bonkers in settling planets etc.

DinyS1705 Mar 26 @ 8:44am
The jobs given by the administrative office do not work correctly, and this building also seems to still give the 20 administrative capacity. The building as far as i know should not give this anymore.

The administrator job doesnt exist anymore as far as i know but is still given by the administrative office and the resources these jobs produce are also proportional incorrect.

Hope this feedback helps / that u can fix it, i tried but have no clue what im doing haha