Greenlight > Games > Chris's Workshop
Greenlight is being retired. For more information on how to submit games to steam, refer to this blog post.
This item has been removed from the community because it violates Steam Community & Content Guidelines. It is only visible to you. If you believe your item has been removed by mistake, please contact Steam Support.
This item is incompatible with Greenlight. Please see the instructions page for reasons why this item might not work within Greenlight.
Current visibility: Hidden
This item will only be visible to you, admins, and anyone marked as a creator.
Current visibility: Friends-only
This item will only be visible in searches to you, your friends, and admins.
Tallowmere
Description Discussions3 Announcements5 Comments152 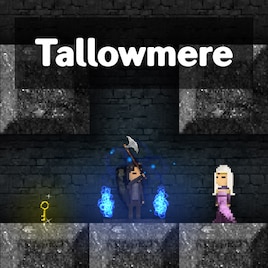 Chris
Offline
See all 23 collections (some may be hidden)

View Tallowmere in the store

Tallowmere was recently Greenlit in December 2014.

Today, I am happy to announce that Tallowmere will release on Steam on 3 March 2015.

My first prototype of Tallowmere was made in December 2013, just over a year ago, featuring a hero, two enemy types, a static room, and some decapitation. Since then, I have added procedurally-generated rooms, many new enemies, special boss and event rooms, multiple trap types, a slew of weapons, a rarity-based loot system, merchants, treasure chests, difficulty settings and challenges, controller support, local co-op, and a high-score system.

To my friends and supporters, thank you! To the other indie devs out there, keep coding! To my fellow gamers, play on! And to those who will be lured into Lady Tallowmere's dungeons, good luck.

Version 229 marks the first Beta build of Tallowmere, as I am preparing to wrap this game up soon. Due to technical issues, I've had to axe any plans for network play unfortunately, but singleplayer and local co-op is still going strong and fun :)

Other changes:
• Anti-stun Potion base price increased to 300 coins, up from 150 coins. (jailed merchants sell items for 50% off however so you can still buy them for 150 coins in the wild)
• Camera now zooms in again when you’re stealthed with the Emerald Dagger and an enemy is nearby (singleplayer only).
• Hitting a pinwheel with an axe or katana now makes you flinch.
• Increased cost/worth of items of 2-star quality and higher.
• Items sold to merchants now give you 25% of their value, down from 50%.
• Increased the occurrence of finding a weapon in a treasure chest.
• Jailed merchants now sell potions.
• Merchants now stock higher-quality items based on how many coins you have.
• The Capture the Flag flag now only spawns enemies the first time you pick up the flag, instead of spawning enemies on every pickup.
• The door in the kidnapping room can now only be unlocked once Lady Tallowmere has been freed from her cage.
• Updated the in-game Tips & Tricks section with everything listed on the new Game Guide page.
• When viewing your inventory, a bullet • will now appear in front of a category that contains loot you’ve just collected.
• Fixed conductor’s white glow showing for a frame the first time they come into view.
• Fixed each hydra head’s health being too high compared to other bosses.

Known issues:
• On the pre-game launcher, clicking the “Play!” button sometimes causes the game to hang before it even starts (you’ll get a black window that doesn’t go anywhere… the Unity splash logo doesn’t even appear). If this occurs, please force quit the game, open the pre-game launcher again, and click Play! without clicking anything else; should work the second time. I have submitted this bug to Unity and they said it will be fixed in the next major version (so probably Unity 5).

The concept is simple yet hard to master:
• Block enemy attacks with your shield
• Strike when you have the advantage
• Avoid traps
• Collect weapons, outfits, headgear, shields, and potions
• Spend souls to increase stats
• Try not to die

You can take a few hits, but fail to block enough and you're done. Learn how things work and you'll hopefully make it farther next time. Tallowmere features a high-score system so you can track your greatest efforts.

Available for Windows, Mac OS X, and Linux. Play with keyboard and/or mouse, or use your favourite gamepad/controller.

Tallowmere offers single-player and local co-op modes for up to 4 players.

Version 229 marks the first Beta build, as I am preparing to wrap this game up soon. Due to technical issues, I've had to axe any plans for network play, but singleplayer and local co-op is still going strong and fun :) Thank you for your support!

If you'd like to play this game on Steam, please vote "Yes" near the top of the page.

GeorgeRRMartinLutherBurgerKingJr Oct 8, 2014 @ 9:59pm
Just ugly enough to work, looks fun. Some of the particle effects make it hard to tell what is going on. Please consider adding wall chickens and other hidden level items.

Tallowmere has been Greenlit and is now listed in the Steam store. For the latest information, purchase options, and discussions for Tallowmere, please see it on the Steam Store or in the Steam Community.
Visit Store Page
For more details Visit Community Hub
For latest discussions
If you really, really want to, you can continue to the Greenlight page. Information on this page may be out of date, since all the action has moved to the areas noted above.