Store Page
Garry's Mod>  Workshop > TimeshiftR's Workshop
This item has been removed from the community because it violates Steam Community & Content Guidelines. It is only visible to you. If you believe your item has been removed by mistake, please contact Steam Support.
This item is incompatible with Garry's Mod. Please see the instructions page for reasons why this item might not work within Garry's Mod.
Current visibility: Hidden
This item will only be visible to you, admins, and anyone marked as a creator.
Current visibility: Friends-only
This item will only be visible in searches to you, your friends, and admins. 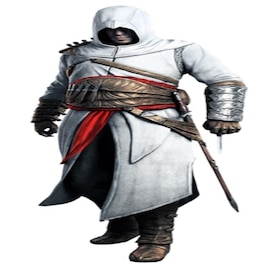 TimeshiftR
Offline
See all 2496 collections (some may be hidden)

This item has been added to your Subscriptions. Some games will require you to relaunch them before the item will be downloaded.
Description
Altaïr Ibn-La'Ahad (1165 – 1257) was a Syrian-born member of the Levantine Brotherhood of Assassins and served as their Mentor from 1191 until his death in 1257. During his tenure as Mentor, Altaïr made several discoveries and inventions that greatly helped the Order's progression. His leadership saw to the spread of the Assassins' influence in the Old World.

Raised to be an Assassin from birth, Altaïr became a Master Assassin at age 25, the youngest ever to obtain the rank.

Long Dong Silver Apr 21, 2015 @ 11:58am
I like the fact that Altair in the first game had the American accent, and here, he looks american. I mean, he ordered a big mac with an extra large portion of greased chips.
< >