Store Page
Project Zomboid >  Workshop > Champygnakx's Workshop
This item has been removed from the community because it violates Steam Community & Content Guidelines. It is only visible to you. If you believe your item has been removed by mistake, please contact Steam Support.
This item is incompatible with Project Zomboid. Please see the instructions page for reasons why this item might not work within Project Zomboid.
Current visibility: Hidden
This item will only be visible to you, admins, and anyone marked as a creator.
Current visibility: Friends-only
This item will only be visible in searches to you, your friends, and admins. 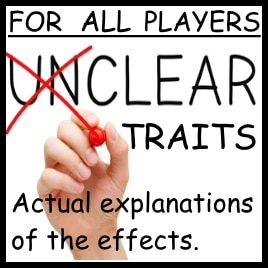 Champygnakx
Offline
See all 35741 collections (some may be hidden)

This item has been added to your Subscriptions. Some games will require you to relaunch them before the item will be downloaded.
Description
18/01/2023 Update :
- Multiplayer should work now
- rewritten all translations
- updated the description of the Lucky trait.
- Fixed typo that caused an error when a trait added darkness effect reduction without adding weather effect reduction, which could cause issues with other mods (SOTO for example)

This mod is intended for players who are confused about what effects each trait and profession has on the character.

It adds description to the traits that need it to describe their effects on the character in detail, instead of leaving people guessing with vague sentences. This way, players can have an easier time imagining their own builds by themselves.

It also adds the description on mouse hover in the character's info screen, in game. This works with descriptions of traits from other mods too, like Banjo's item kits or Dynamic traits for example.

This is based on a combination of my own knowledge, the games files, your feedback, and the wiki of PZ.

Most of what I added in the traits' descriptions are in parenthesis so you can distinguish what is vanilla description and what is not.

If you notice a typo, or know of an effect that is not listed, or spot something that is wrong or poorly worded, please leave a comment to point it out to me. I don't think I got every single effect that could be listed, and I may have made a mistake somewhere, so I'm relying on you guys for that.


Compatibility
Works with build 41 and in multiplayer.
Compatible with: Dynamic Traits, More Traits, Banjo's Item kits, More Simple Traits...also Driving Skill, Scavenger Skill...
So it should be compatible with any mod that adds traits or skills.

Note: I will not list any EXPLOIT or BUG that is clearly unintended as part of a trait or profession's effects. The issue with Weak Stomach has been noted, and I made a bug report to the devs. If they don't fix it, I will update the description to point out the unintended issue.
For those who want to know, the issue with Weak Stomach is it makes food illness last shorter instead of longer. (not as short as Irong Gut though)

Since version 41.66, the mod needs a few more words translated such as "Fish baits", "Forest Rarities" or "Malus can be canceled by wearing glasses".

Anyone is welcome to volunteer to translate to their language.

Character Info Screen Tooltip:
The mod displays the detailed description of each trait in the character's info screen window on mouse hover. Works for professions too (except Unemployed since it doesn't have an image).
Works with traits of other mods too! Although their descriptions probably won't be as detailed.

wget Jan 28 @ 7:26am
thick and thin skinned don't affect the chance of your clothes being damaged while walking through trees

Brigand231 Jan 18 @ 10:48am
Not to kick a dead horse, but yes, spamming requests for modpacks generate a lot of comments on many mod threads and they get amazingly annoying with new servers popping up often; for every request, for every mod requested, each and every person subscribed to the discussion is forced to deal with it. I appreciate that when Gas.Pimienta wanted to ask, they started a separate discussion thread for this mod and the author even responded with:
Of course you can use it.
Everyone can use it, so in the future no need to ask permission

Maybe all Workshop items should have such a thread or put such statements in the description so authors would only have to (hopefully) address it once.

@champygnakx thank you, sorry for asking on every one, some mod makers want you to some dont! XD

Champygnakx  [author] Jan 18 @ 7:44am
@Tofuman @Buzzkill @minami26 Solved the issue, with the new update it should be good now.

Tofuman Jan 18 @ 7:30am
@Champygnakx Simple overhaul traits and occupation, the mod was working with it before.

minami26 Jan 18 @ 7:06am
seems like theres some conflict with SOTO before it was showing the added skill in the description. After the update soto errored and now some traits in info panel doesnt show the skills added like swordsman/shooter/runner etc.
< >