The Cloud Dream of the Nine

Store Page
구운몽 > Guides > Bánh's Guides
This item has been removed from the community because it violates Steam Community & Content Guidelines. It is only visible to you. If you believe your item has been removed by mistake, please contact Steam Support.
This item is incompatible with 구운몽. Please see the instructions page for reasons why this item might not work within 구운몽.
Current visibility: Hidden
This item will only be visible to you, admins, and anyone marked as a creator.
Current visibility: Friends-only
This item will only be visible in searches to you, your friends, and admins. 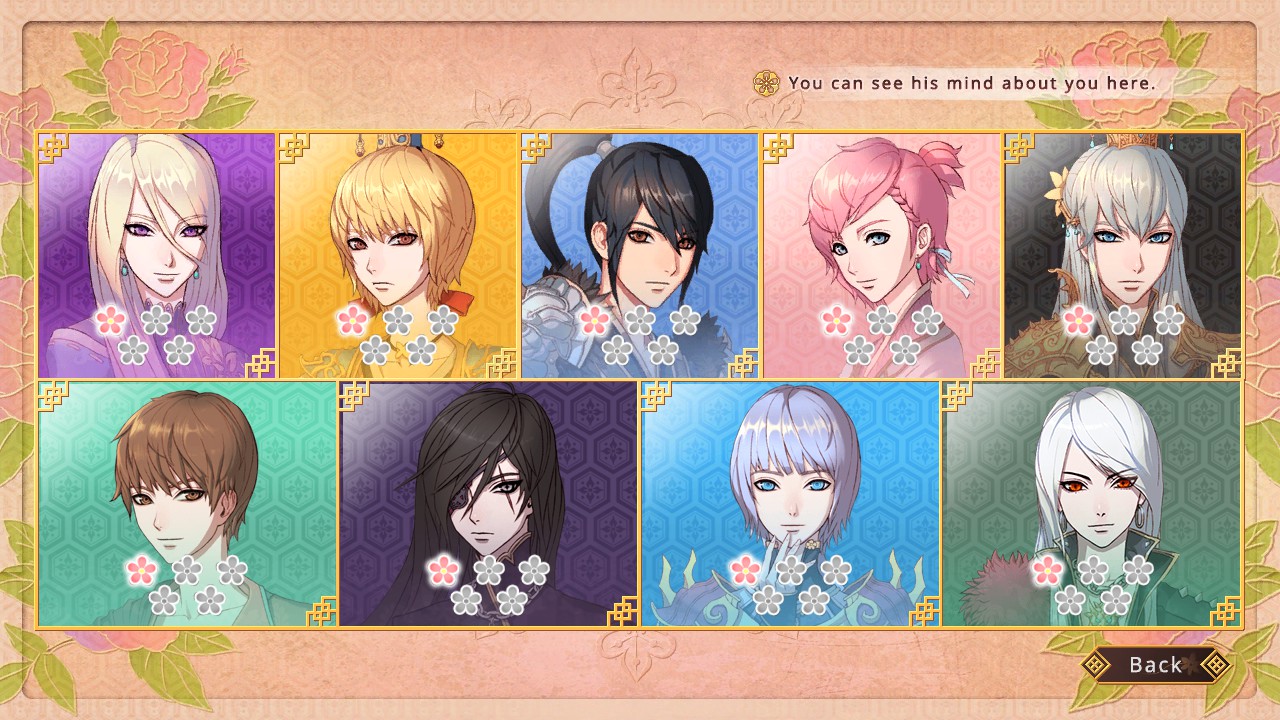 To get-in the route you want, just choose the choice match with his symbol.

1/Unlike other characters, you have to get bad mini games result to enter Haerang route. But after get in his route, you must play the mini games properly if you want to get his good ed.

2/Baeknan is the easiest one to get good end, which also mean he is the hardest to get bad ed. There is a trick for that if you want both of his end and don't want to replay those mini games in common route (because who want that?)

Pick all his affection choice up to this choice 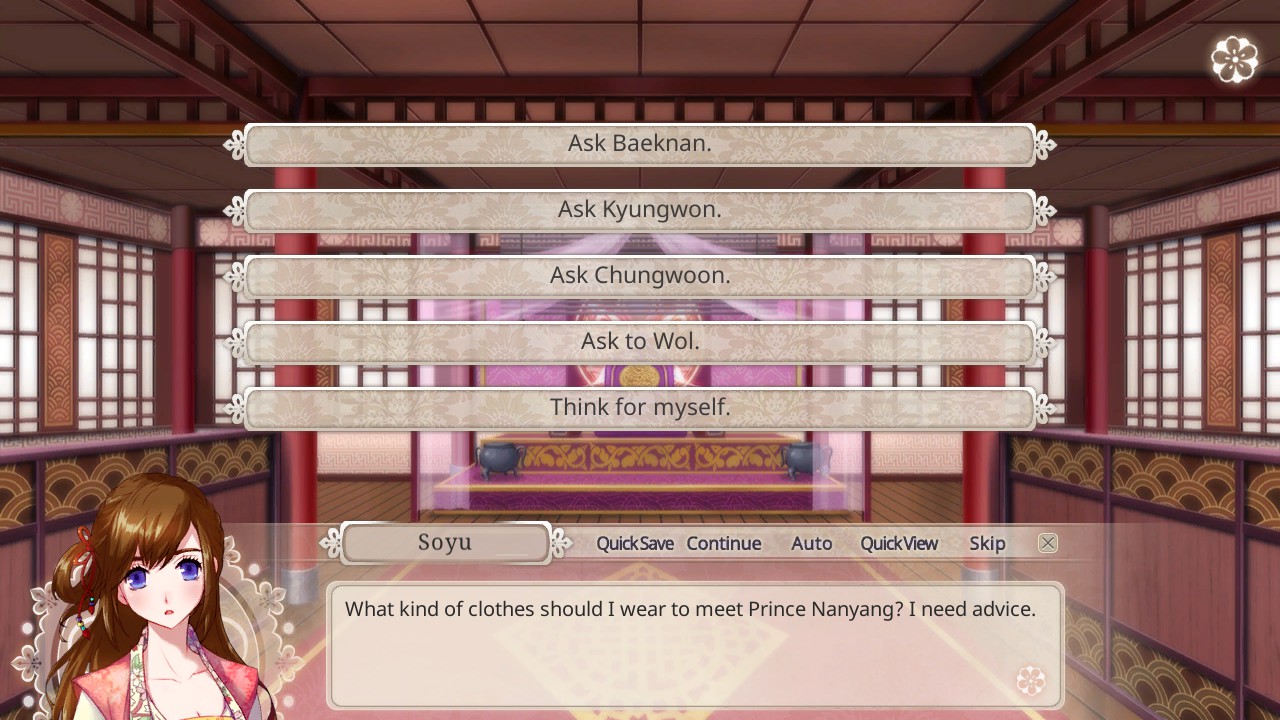 Then make 2 save file, one for good ed and one for bad ed.
For good ed save file, continue pick all his choice to the rest of the common route.
For bad ed save file, choice any choice that not Baeknan's.
I recommend this for those who want to do blind play.

If you use my guide, then just stop pick Baeknan's choice from that point and make a save when you encounter Baeknan's route 1st choice, my guide will help you get through both end.

3/If you want to unlock bonus content (special page and another story), you have to clear both his good and bad ed, also perfect all the mini games in his route. 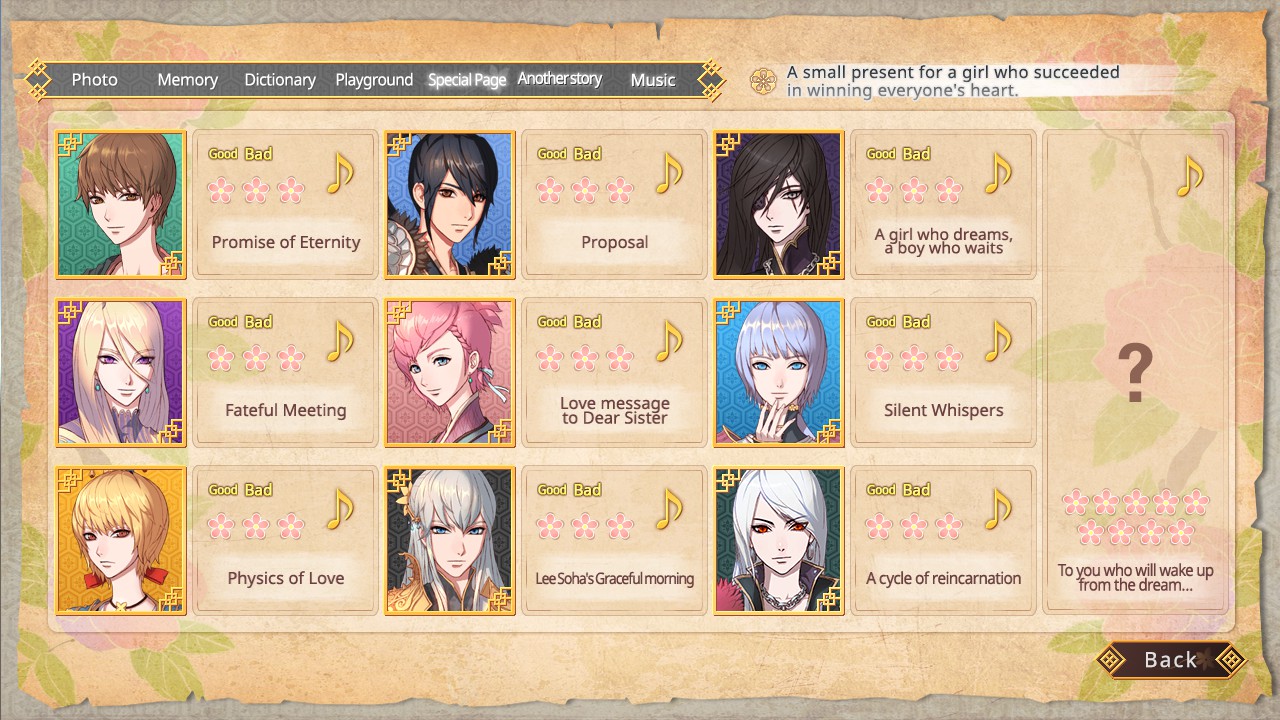 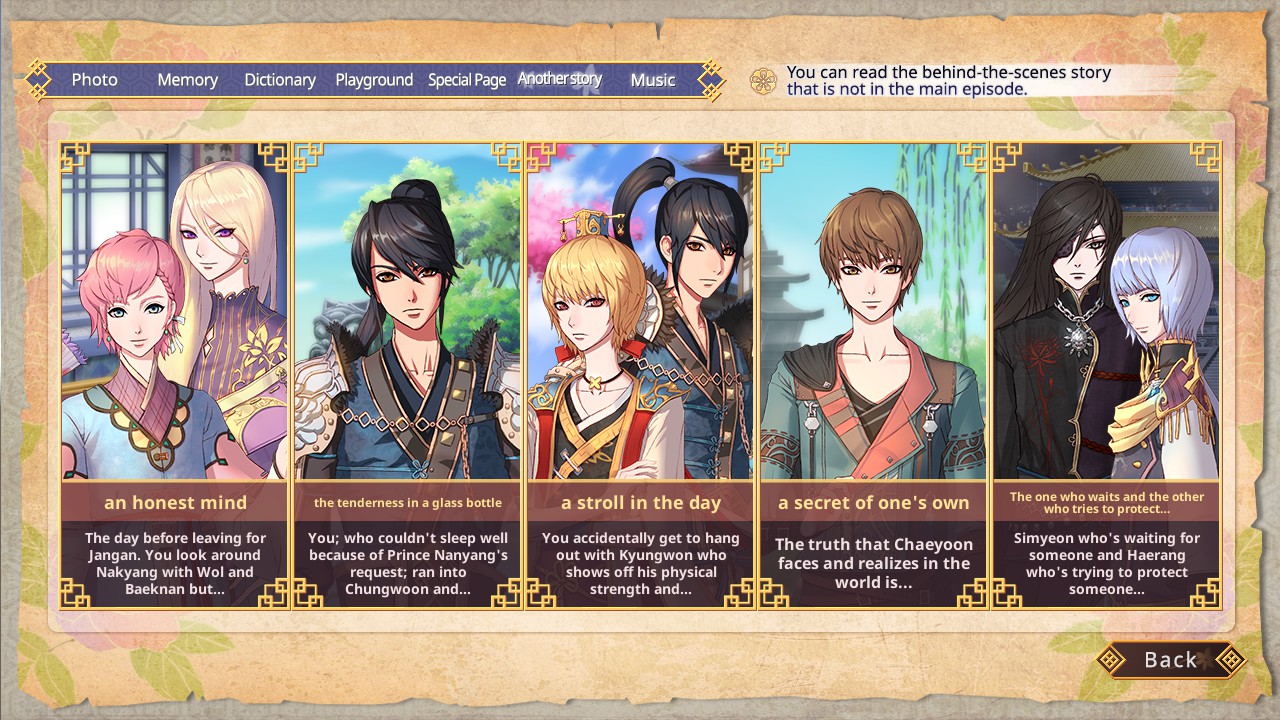 4/Wait until the ending credit end and the tittle menu show up, or else the game won't remember you already clear the ending.

Choice 4
Of course I have to find Chaeyoon (Chae, Wol, Chung, Hong)
What would you do (Kyu, Baek)
Seems so. What should I do (Chung, Soha, Sim, Hae)

Choice 10
Straightforward comment is the best (Wol, Kyu, Chung, Sim, Hong)
Beat around the bush (Kyu, Chung, Soha, Hae)
Let's just move on (Chae, Baek, Sim)
Hint
If you want to get the end w/o getting spoiled (aka blind play) 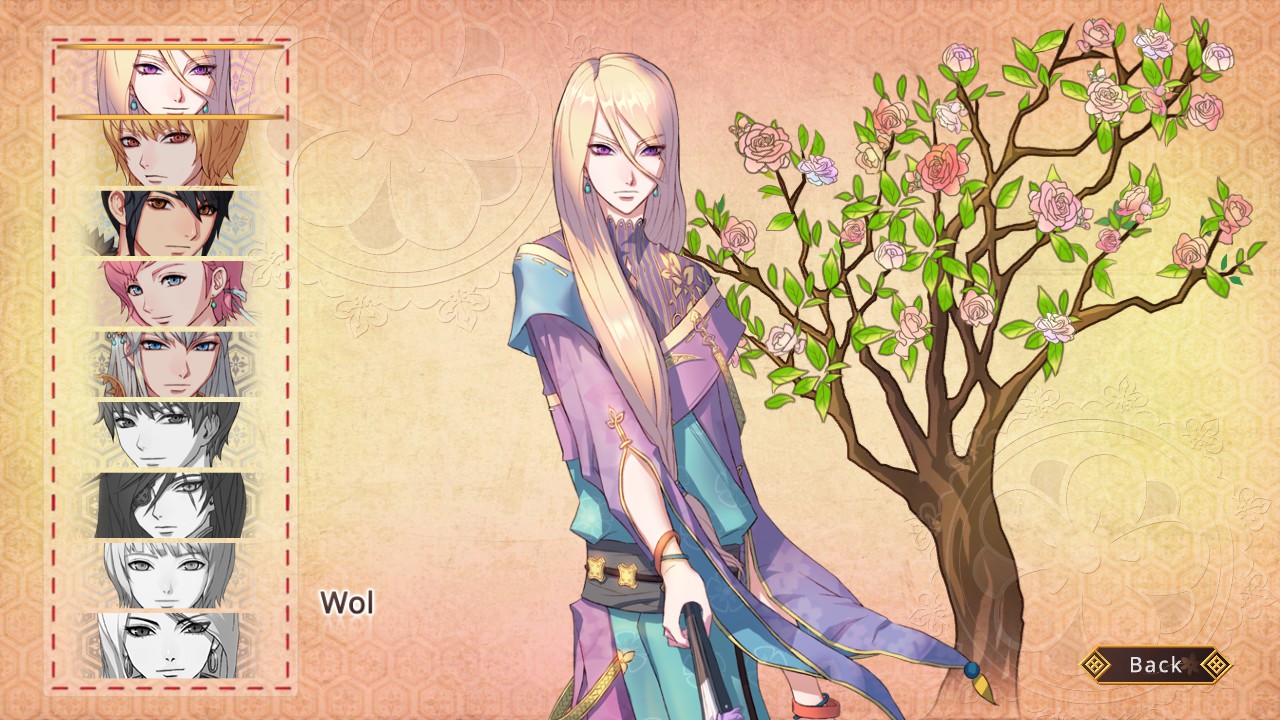 Gameplay result also have affect to your love point. Just play the easy mode just to be in safe side.

For good ed, you have to make the right choice and play the mini games properly (get all mini games with perfect result, you need it to unlock bonus content). 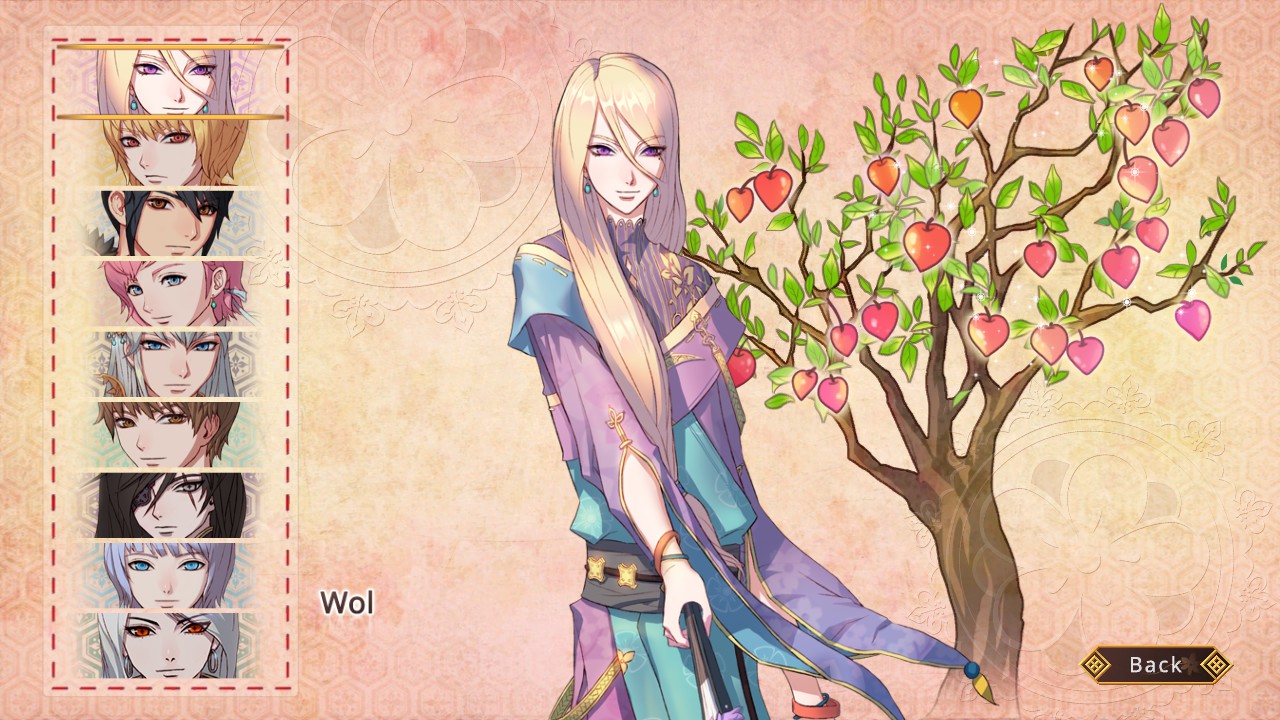 For bad ed, make the bad choice and don't touch the mini games, just leave it be until the time up. 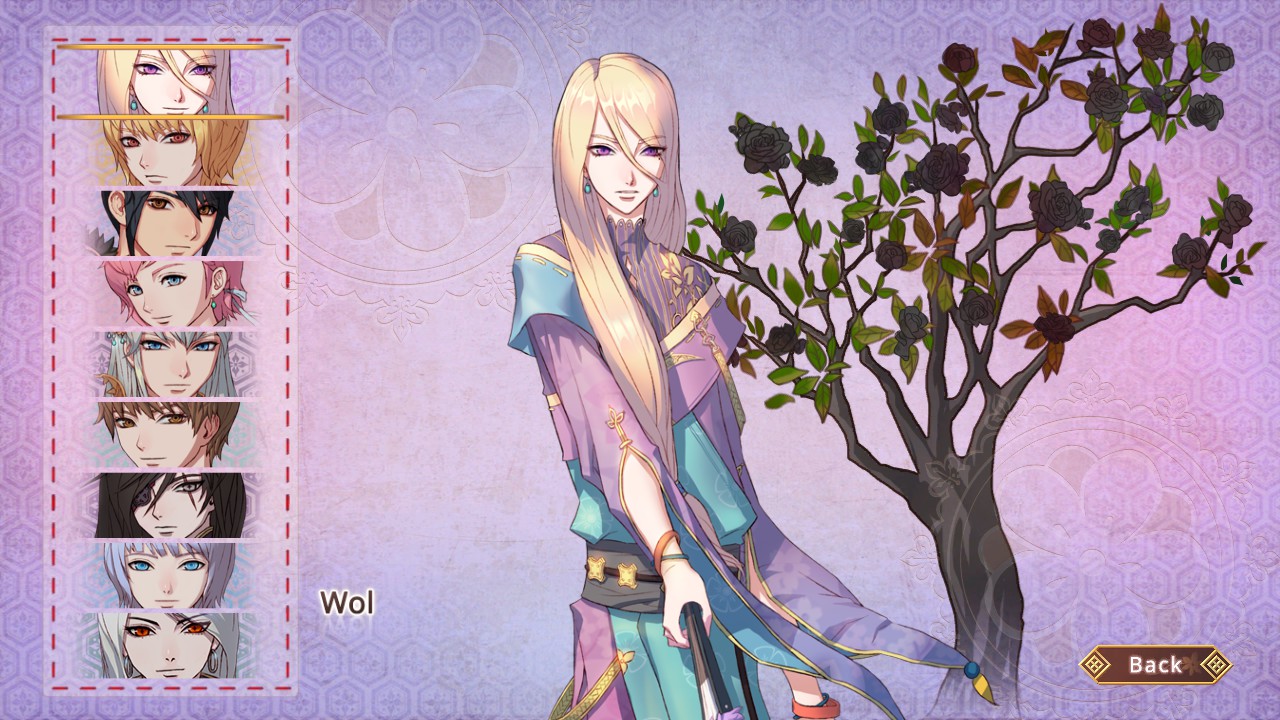 If you mix good choice with bad mini games result or bad choice with good mini games result, you will end up get kick out from the route so be careful.
Wol
Good ed: (need to get all mini games perfect result)
Thank you for helping me
It's because you keep doing weird things
I think you (? I think it should be he is here though) are a good person
Family (although I recommend just quicksave then pick Lovers option before repick the right choice, because Wol's reaction here really hilarious)
Because it's a gift you gave me
Looks sad
Yes I think it's different
Because you are in Nakyang
Pick whatever you like in 2 last choice.

Bad ed: (Don't play the mini games)
Could you sit a little apart? it's uncomfortable
It's so hot today
What do I think of him? Of course he is a terrible playboy
Lovers
I have nothing to do
You looks angry
No, same
Because there are many delicious foods in Nakyang
Enough, I don't want to talk to you anymore
...(say nothing)
Kyungwon
Good ed: (need to get all mini games perfect result)
Say sorry for worrying
Reject contract dating
People who seem to be friends
First of all, say thank you
Say you know the answer
I'm not sure
Seal of Dear Soha
Catch with bare hands
Ask Kyungwon to go after pickpockets together
Yes I care

Bad ed: (Don't play the mini games)
Pretend to be indifferent
Reject contract dating
A man with a little problem
Honestly say it's burdensome
Say it's dangerous
It's burdensome
Cheer of Dear Soha
Don't stop him and leave him alone
Just stay still
No, I don't care at all
Chungwoon
Good ed: (need to get all mini games perfect result)
Accept the offer
Because it's best for His Highness to take the throne
Try to be patient a little more
I sincerely support Dear Soha
Harsh criticism
I think it's the mission given to me
Would you like to listen to my performance?
Let's respect Chungwoon's will
Pick whatever you like from here

Bad ed: (Don't play the mini games)
Refuse to be euphemism
Because His Highness is so pitiful
Take off my shoes and walk barefoot
It's for Chaeyoon
Make useless jokes
It's for Chaeyoon
Say sorry
Ask Chungwoon to stand with Dear Soha
Leave it to Soha
Follow Dear Soha's words
Baeknan
*Read the common route note crefully before play this route!
*Update March 19th 2022 for Baeknan's good ed choice, thanks for @Kat's infor.

Good ed: (need to get all mini games perfect result)
I thought so too
I am stronger than sir Chungwoon
Musical intrusment store
I'm not angry
Rather, I think I'll be protecting you
Kiss on cheek
Let's soothe well
Wow you are really pretty
Either 2nd or 3rd choice
Still not really

Bad ed: (Don't play the mini games)
Say I'll not stay here
Agree with Dear Soha
It seems too dangerous
Cheer up, Dear Soha
Tell him that you have to pursue all the way
The person who will restore Chaeyoon's honor
It's easy to break trust
Myself
Affliction driven by traitors
Dear Soha is scary
Chaeyoon
Good ed: (need to get all mini games perfect result)
I'm the only one
To find Chaeyoon
Then stay by my side
Follow Chaeyoon
Hear more stories
Never
From a long time ago
Pick whatever you like from here

Bad ed: (Don't play the mini games)
The only precious friend
I think I have to follow
Are you really going to be with me
Ask His Highness
Speak clearly so that he can relieve his suffering
Agree with him
Let's make an excuse for Chaeyoon
Well, not sure
Isn't Chaeyoon really good to avoid the situation
Don't say that scary
Simyeon
Good ed: (need to get all mini games perfect result)
Go closer and inspect
Just leave him alone
Glad to meet
Ask directly
Let's ask to cat
Rather, you keep saving me, weren't you?
Simyeon, have you ever been in love with me?
Honestly said thank you
Let's watch
Talk to him

Bad ed: (Don't play the mini games)
Pretend know nothing
Just leave him alone
Just stay still
Just move on
Should I just sleep
But are you sure it was around me
What do you see like that
Beat around the bush
Prevent them from coming
Pretend know nothing and go to sleep
Haerang
Good ed: (need to get all mini games perfect result)
Haerang
Apart from saying I'm pretty, tell me something else
Ask them to tell you a story
I'm not sure, Haerang can tell
I want to be with Haerang
Bacause fell in love at first sight?
Pick whatever you like from here

Bad ed: (Don't play the mini games)
Chaeyoon
Then I have to go back to the mainland
I think everyone's eyes are weird
Let him sing a song for me
They continued to live happily
I like living in Dragon Place
Because of your duty as a Dragon King
Even the same situation comes, I will make the same choice again
I'm not sure
Pick whatever you like
Hongyeom
Good ed: (need to get all mini games perfect result)
Let's follow him
If I tell you my story, promise you'll explain me this place and Chaeyoon properly
Myself
I have nothing to say because of this ridiculous situation
Be my friend
Chungwoon's feelings
I'm scared to die
I answer honestly
hold hands
Pick whatever you like

Bad ed: (Don't play the mini games)
Let me see
There's nothing to tell someone like you
One of the people around me
I'm so angry that I become speechless
Let's be together forever
Chungwoon's thoughts
.......
Speak vaguely
Do nothing
Pick whatever you like
< >
15 Comments

Bánh  [author] Mar 18 @ 12:39pm
Hello @Kat, I did replay and choose 3 choice, it seem like the 1st choice didn't lead us to the good end anymore (thought it did to me back then, which I guess that's because they did update the game after I make the guide), both the 2nd (your choice) and 3rd choice still lead to the good end. Thank you for the infor.

Kat Mar 18 @ 10:59am
Hi i wanted to say that in the Baeknan route, good ending, your "pick whichever you like" didnt work, i only got the good ending with the answer "you seem close to the courtesans"

Bánh  [author] Jan 3 @ 9:02am
You can make a disscussion topic and wait around 1~3 days, that's how I communicate with them. Luckily Sesisoft is a very active dev and diligently answer fan's question, at least it's my experience with them.

Vergil Jan 3 @ 3:42am
@Bánh Hello and thank you!! No, my mini games result are perfect, I play on easy difficulty. So it's not supposed to be like this? I totally should contact developers but how?

Bánh  [author] Jan 2 @ 11:10pm
hello again @ib0rg, hopefully you will see this cmt
I just update common route choice for the guide, hopefully it help you get in the route you want w/o the symbol show up.

Bánh  [author] Jan 2 @ 10:10pm
The only reason I could think of is your mini games result, if you focus affection choice to 1 character that's it (there is a mini games before the 1st choice). But it still way too soon to "wake up". If your mini games result are bad, try replay it with easy mode, but if it good then I recommend try to contact the dev.

Vergil Jan 2 @ 6:23am
Hello! Could you help me please? My heroine keeps waking up after second choice. Maybe you know why?