Store Page
HighFleet > Guides > KarlDraigo's Guides
This item has been removed from the community because it violates Steam Community & Content Guidelines. It is only visible to you. If you believe your item has been removed by mistake, please contact Steam Support.
This item is incompatible with HighFleet. Please see the instructions page for reasons why this item might not work within HighFleet.
Current visibility: Hidden
This item will only be visible to you, admins, and anyone marked as a creator.
Current visibility: Friends-only
This item will only be visible in searches to you, your friends, and admins.

Dialogue (and now Character) Modification
By KarlDraigo
Wanna learn how to modify the dialogue (or characters)? Want to turn the game into something even more stupid than it is? Want to make a fan translation? Then this is the guide for you!

So what do you do?

Examples of my autism

Comments
Explanation
So the dialogue is hidden somewhere in the Highfleet folder (HINT: check the data folder ;3). 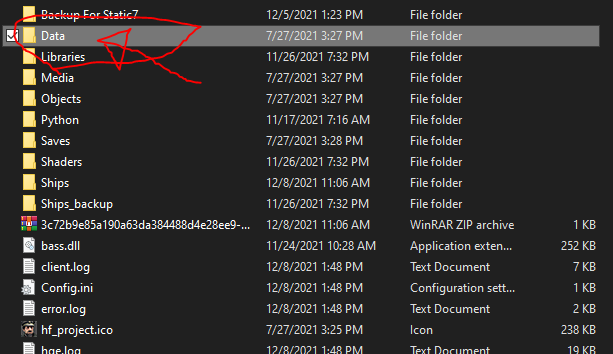 But the problem is our lord and savior KK has encoded it, and if your brain is wrinkle-free like mine this might be a bit challenging, tbh this guide is more of just a link to the software to do all this stuff. But I might include some small tidbits of info I found out.
So what do you do?
So if you go into the "Data" folder, you will find 2 new folders, you want to choose the one called "Dialogs" (good spelling KK). In there you find 2 files, the English and Russian one. Now chances are you are a Western human being and speak English so you wanna edit that file right? But BOOM its encoded.

Now what do you do? NOTHING cuz ur smoothbrained like me.

OR you could decode it using some software (of which a new and good friend whipped up for me based off of something else, idk how it works, please dont ask, I have no idea how this arcane contraption works).

This man is a genius, tbh Ill include him in the credits and please thank them not me (a bit narcissistic to think you would thank me but still).

Download it and follow the instructions in the readme and you can encode and decode with ease!

Remember you need to encode it again for it to work.
Details
So now you have decoded your .seria_enc file, good job! You have done it!

You can now start messing around with dialogue and can probably figure a few things out, a good example is this:

You can change a lotta stuff like the names of characters, dialogue, responses to dialogue, and much more! You can even mess around with the blue text that gives world information, paired with messing around with the Tex folder and messing around with the pictures in there you can now completely reskin Highfleet or do whatever you would like! More is probably possible but I havent figured it out yet, guide will be updated as more stuff comes to my attention and as I struggle with my ADHD to actually do productive things!

You can also add new dialogue lines, it seems finnicky and I havent fully figured it out yet but Ill give an example with the nuclear launch dialogue.

As you can see I added two things, the first thing I added was "<ANS=♥♥♥♥ you. |NUCLEAR_ESCALATION_4>" this provides the third response as seen later in the guide (finished result).
But the ending part (The NUCLEAR ESCALATION_4 part) seems to be needed to guide the dialogue to the next part.
So then you also want to add in a response, so you put in #NUCLEAR_ESCALATION_4, then put <NPC=PETR (the person)><SIDE=1 (seems to be the left side)>♥♥♥♥ you too.
This gives the response. (The stuff in there parentheses are like... what I know about it)

Now I tried multiple times to put the |EXIT> code at the end of what Pyotr says but it never worked and I got stuck in the screen, so it seems you must add an answer at the end (<ANS=...|EXIT>), idk how it works, Ill keep testing, maybe its unique because its the nuclear launch dialogue, idk.

The game is now your oyster! 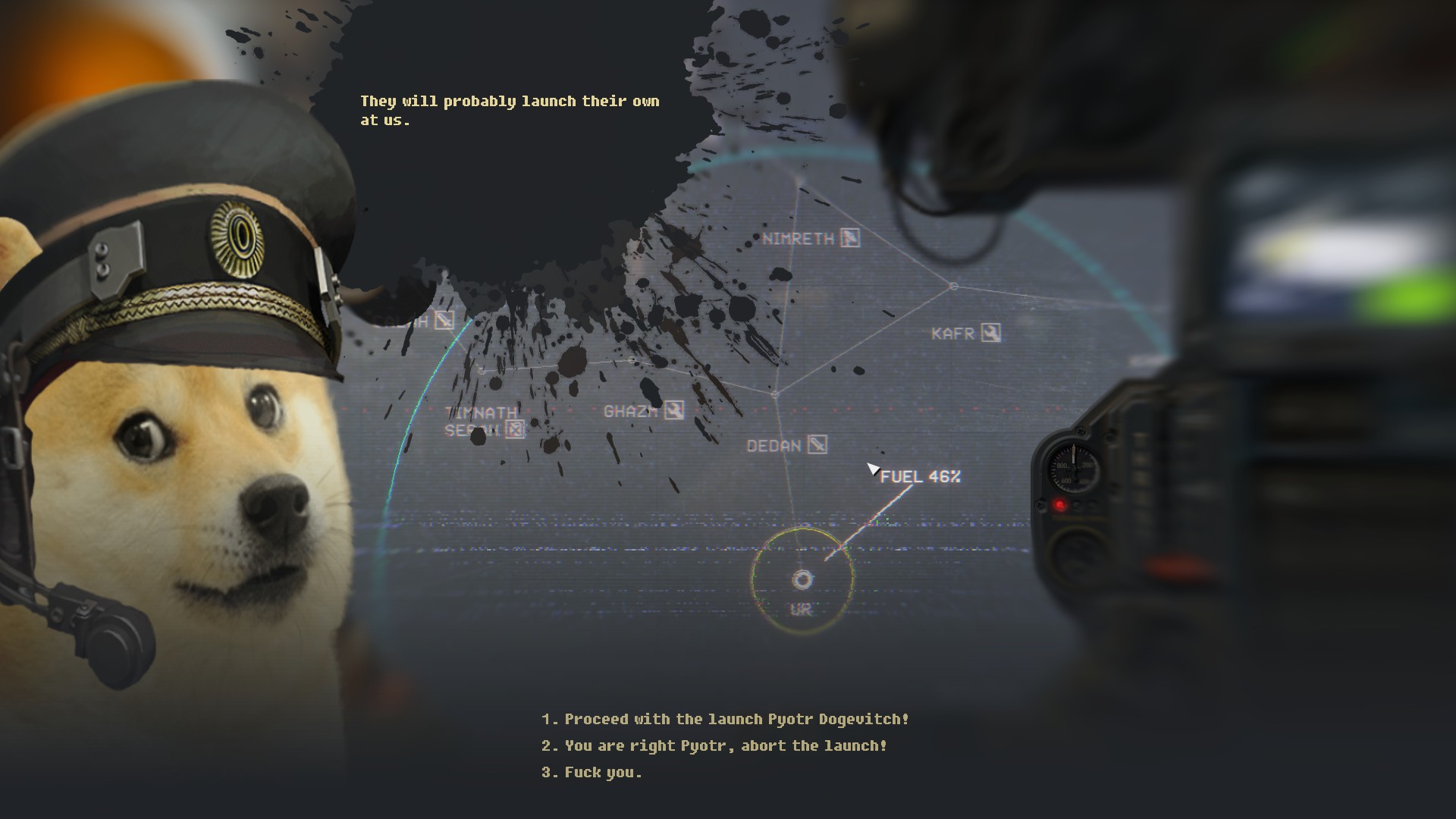 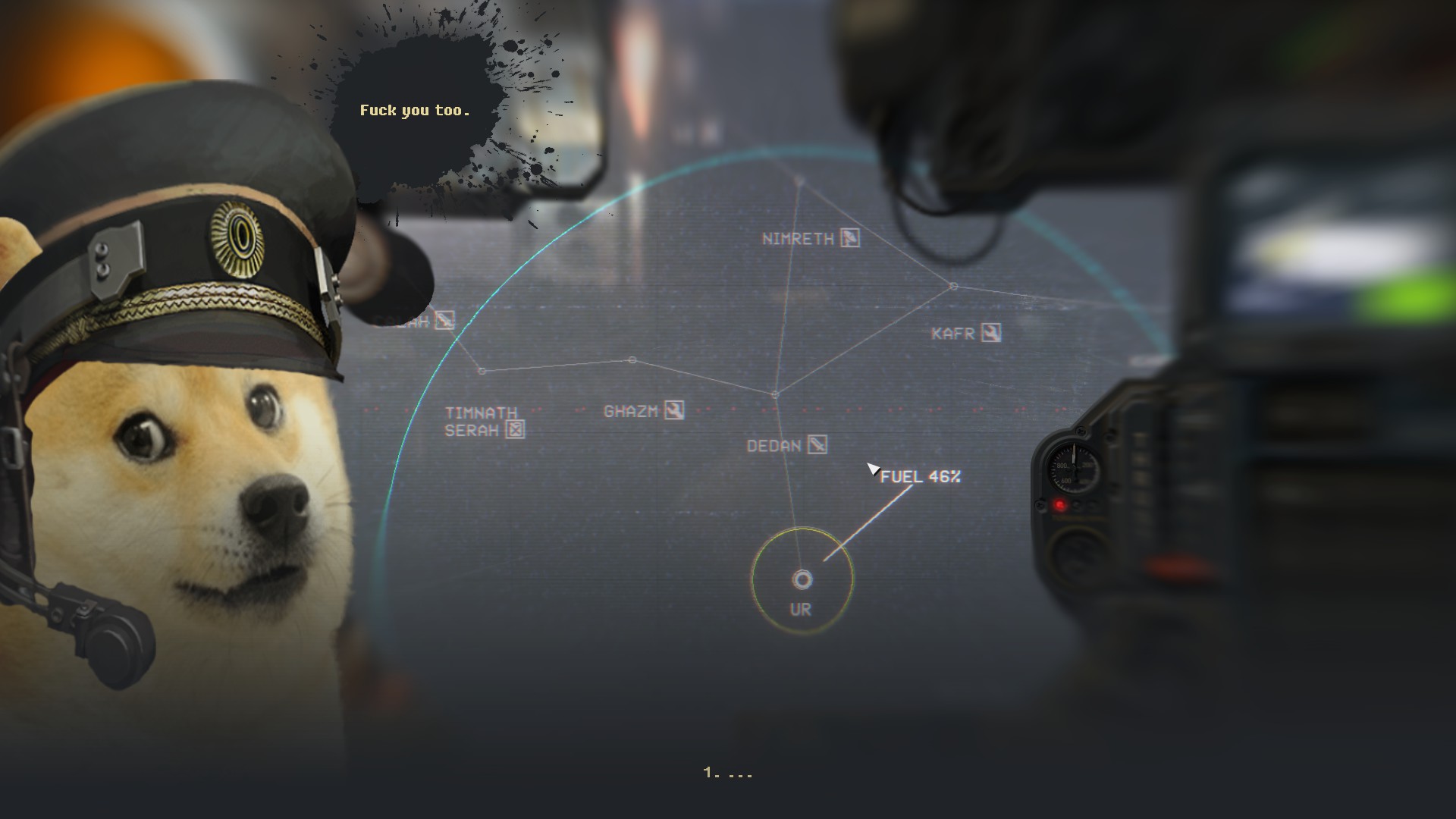 (The beginnings of remake of Highfleet called "Dogefleet" that me and a friend have been working on)
Character Modification
Okay I havent done much with this in a while and wanna update this to make it a bit more of a complete guide for u dudes.

Maybe you want to also mess around with the characters too, like replace them with doge, or other whacky characters, by request from a comment I will also include this real quick, including the path to the files, and how to change them.

The path will be shown...
NOW 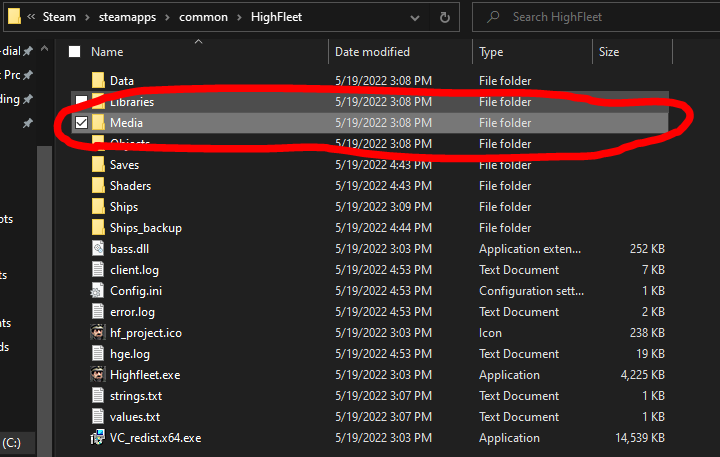 Of course to get here you NEED to find the game files which can be done by right clicking the game in your library and choosing "browse local files".

Now in the final image I circled an example with my red marker, this is one I will be using. 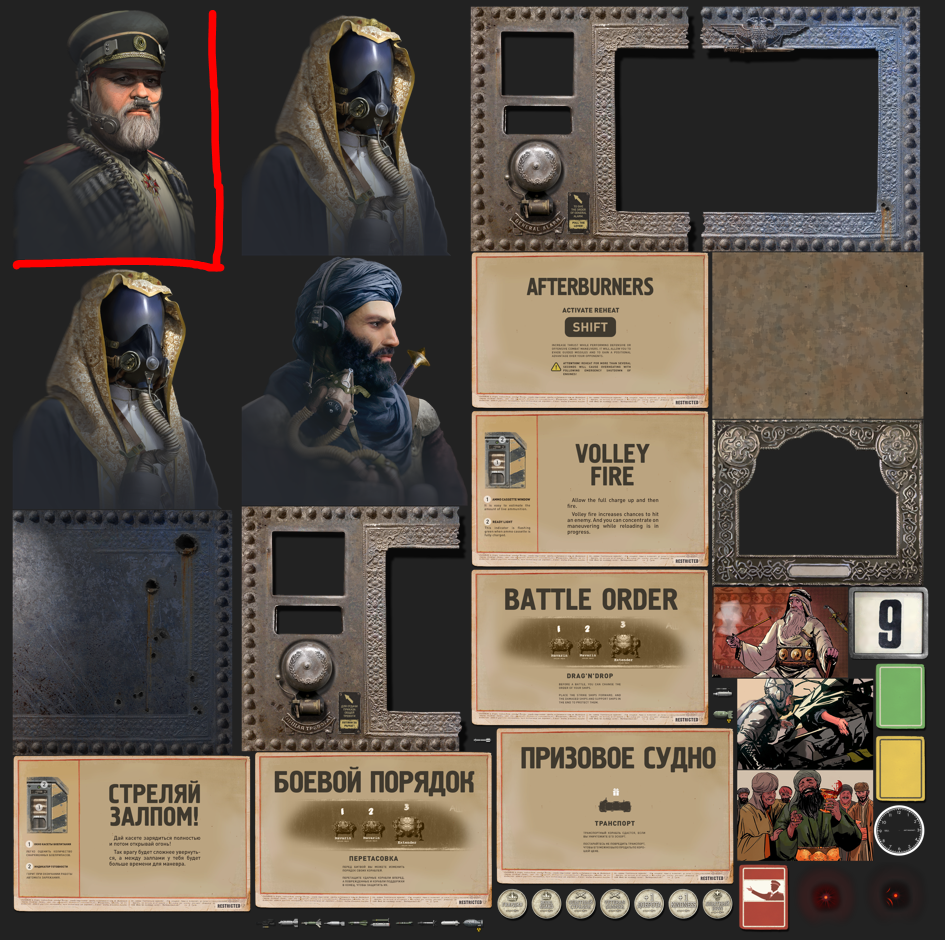 Lets say you wanna replace Pyotr with some other image, first you of course, need an image, which I trust u guys can find one or make one! Then you need to guesstimate the borders on how the game selects the image (I drew a rough guess on where the border on Pyotr is, it may take some playing around with). Then all you need to do is replace it and you get your final result (see other images for example).

Credits!
Well of course credit to my friend who made the software, stopnoanime on discord, idk their steam name.

GIS for emotional support and helping me discover this by helping out with the "Dogefleet" remake, and Pyotr Dogevitch.

And me, for being cool 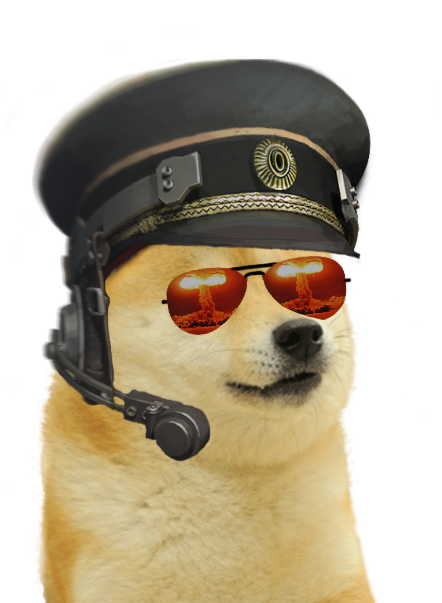 (Pyotr Dogevitch, credit to GIS)
Examples of my autism
Meeting Omar Doge and giving him the pot thingy that the masked dude gave you in the beginning. 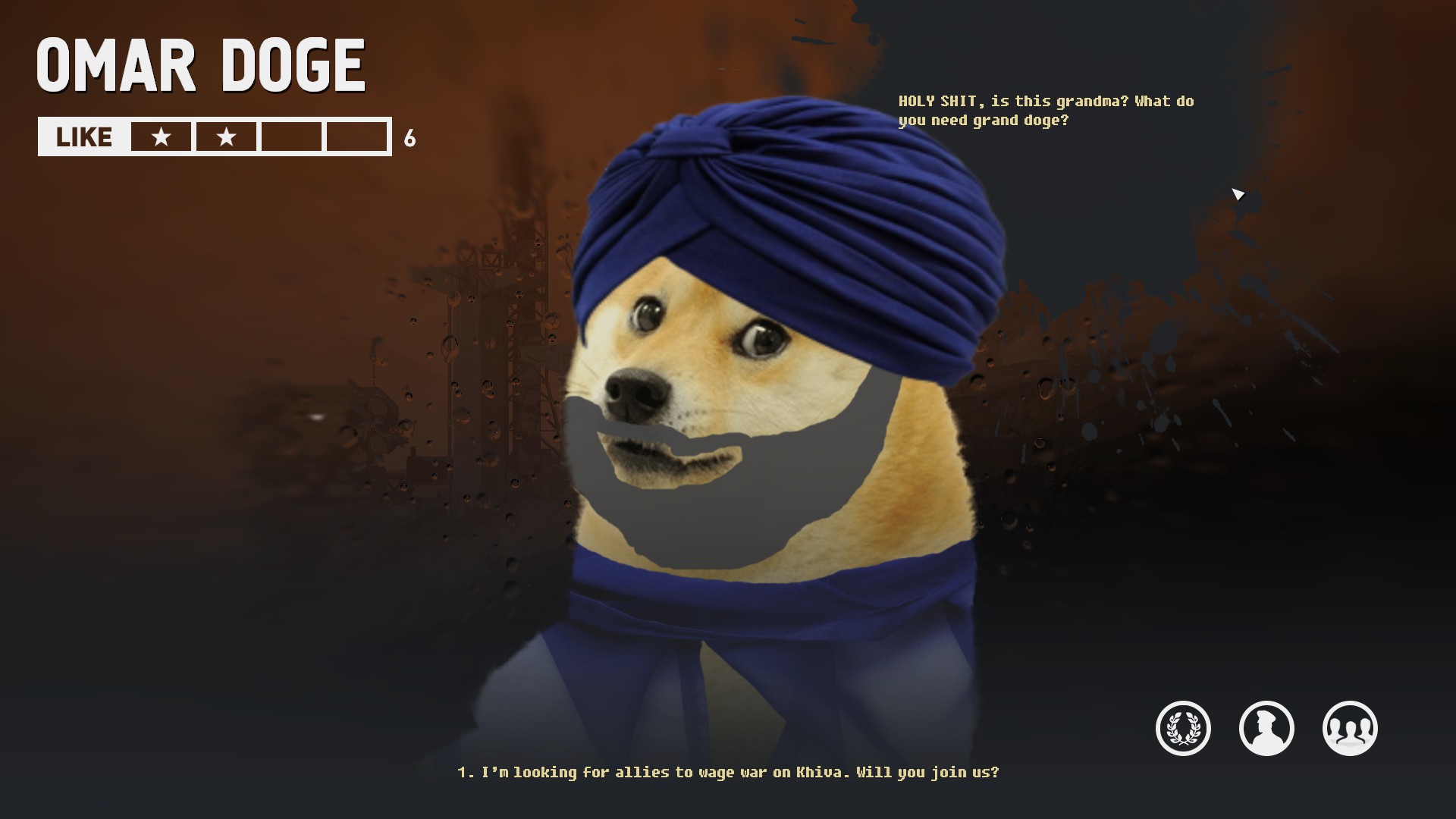 Meeting the prologue Tarkhan. (Text not yet modded) 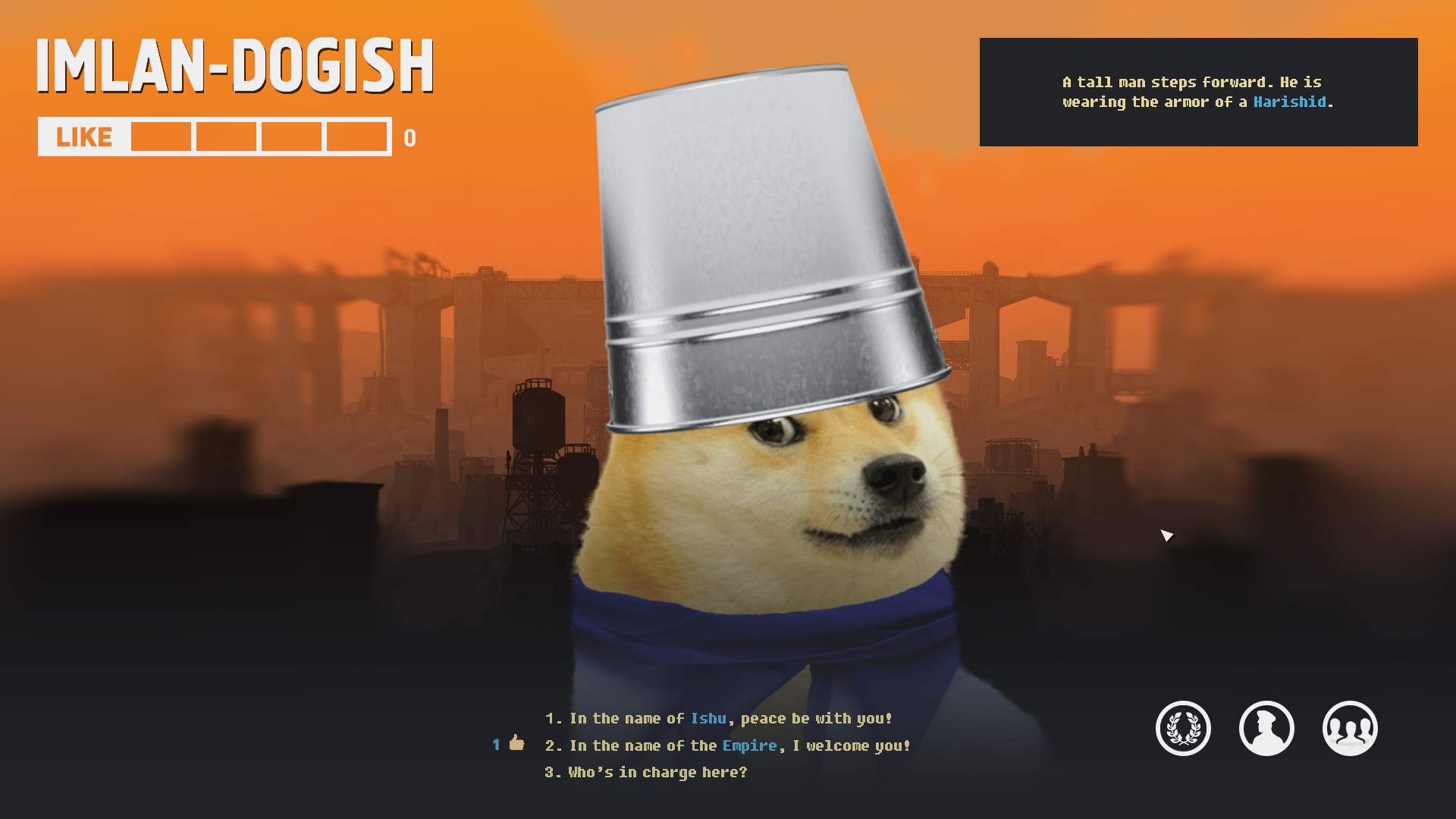 Ending
Now go forth Tarkhans and create new memories, make a few omelettes by nuking a city or two, and be cool!
< >
14 Comments

KarlDraigo  [author] May 27 @ 8:04pm
To those who wish to see it, I finally got around to releasing (an unfinished version) of Dogefleet
https://steamcommunity.com/sharedfiles/filedetails/?id=2677719733
Theres the guide link

Nyx May 20 @ 7:52am
Please do, I can't seem to find any files that could relate to images, But I'm not gonna force you, I'll still look into it.

KarlDraigo  [author] May 20 @ 7:29am
You can replace the character images in a certain folder, it should be in a data or library folder inside of the game folder (which you can find by going to steam, properties of game, browse local files, then just find it)
And inside of the images you can guesstimate the borders of each character and replace it, I may update the guide to include this

Nyx May 20 @ 1:44am
Hey lad, I know you might be busy like you said in one of your comment but I am curious, how did you manage to get, y'know the doges? Is there a way to replace character images? Because I wanna try some dumb shit with it.

Tomomo (Casual) May 8 @ 4:01am
Thanks to your friend for the software, and thanks to you for giving it the attention it deserves. Excellent stuff. Needed to add descriptions for my custom ships.
(Which, in case anyone else needs to do it, just add dialogue for the tag #SHIP_DESC_SHIPNAME, replacing SHIPNAME with yours of course)

Edmond Jan 14 @ 8:50am
So where are you gonna be putting Dogefleet if and when it comes out? I'm borderline hyped for it and wanna know where to check in every day
< >