Greenlight > Games > GameArt Studio's Workshop
Greenlight is being retired. For more information on how to submit games to steam, refer to this blog post.
This item has been removed from the community because it violates Steam Community & Content Guidelines. It is only visible to you. If you believe your item has been removed by mistake, please contact Steam Support.
This item is incompatible with Greenlight. Please see the instructions page for reasons why this item might not work within Greenlight.
Current visibility: Hidden
This item will only be visible to you, admins, and anyone marked as a creator.
Current visibility: Friends-only
This item will only be visible in searches to you, your friends, and admins.
Quantum Rush Champions
Description Discussions6 Announcements34 Comments349 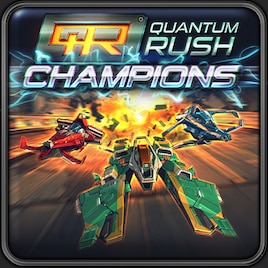 Store page
Recent Announcements View All (34)
A.I. Invasion goes gold!
October 1, 2015 - GameArt Studio
We are proud to announce that A.I. Invasion completed its Early Access phase and is now available as full version! Many new features, missions and locations made it into the game.
Take on the role of a soldier fighting against the merciless A.I. machines controlling the universe. Traveling the Rimae planetary system you command a team that has to overcome various missions to defeat those pesky metal roaches. Utilize a wide range of weapons and even special items that aid you in battle! Can you reclaim the system from the A.I.?

Full list of features
Additionally many minor improvements, bugfixes and smaller feature additions mark the transition of A.I. Invasion from Early Access to full release. So, see you on the intergalactic battlefield!

A.I. Invasion is set in a post-apocalyptic age and demands lots of strategical skills from trigger-happy players.

The extra-terrestrial A.I. has subdued the whole galaxy with a overwhelming army of machines. In various deadly missions set on different planets of the solar system, players have to face this threat to reclaim the place of mankind in the universe.

He is assisted by a team of special units he has to equip and command and by many special items he has to unlock during gameplay.

Who wants to throw themselves into battle can do that immediately as the game has been released today on Steam in early Access. Until release there will by many content updates and more missions and battle grounds.

More information can be found on the Steam page (http://store.steampowered.com/app/386540/) and on the official site of the game (www.ai-invasion.net).

Read More
Description
Release date: September 2014
Quantum Rush, the combat-loaded future racer, is back! This time, as a full fledged standalone game with lots of single-player content.
Our goal is to make the Quantum Rush racing experience - the game with speeds up to and beyond the sound barrier, mounted weapons and collectable power-ups, gravity-defying, customizable racers and exciting race tracks on earth and in space - accessible to everyone.

We created the online game Quantum Rush to bring new life to the genre of futuristic racing games. Now, we want to make Quantum Rush available for more players world wide and at the same time provide offline play with a lot of new exciting features!

Another reason why we want to create Quantum Rush: Champions is that we continually receive lots of feedback along the lines of, “Hey, awesome game! But I don’t want to play online, can’t you implement a single-player version and make the game run offline?” This feedback started during our Kickstarter for the online game and we keep receiving this kind of request, especially via Steam, where Quantum Rush Online has been Greenlit by the international gaming community. Thanks again to everyone who voted for us, you are amazing!

How exactly will Quantum Rush: Champions be different from the online game?
This new iteration of Quantum Rush will focus on single player. There will be a Career mode with an initial 3 campaigns, one for each of the three racer manufacturers, with more added through DLC. In each campaign, players will have to master a variety of challenges to unlock upgrades for their racer (engines, weapons, skins etc.) and ultimately unlock the next tier, up to tier 7, where the ultimate challenge awaits.

Playing through the Career mode, players will unlock new racers, upgrades, race tracks and challenges for the Arcade mode. The Arcade mode will allow you to define your own races: number of opponents, AI difficulty, challenge type, race track and so on. Two examples of potential challenges are "Last Man Standing", where every 15 seconds the racer in last place is destroyed and "Time Challenge", where you have to finish the race within a certain time to score bronze, silver or gold.

Another very important addition is the improved articifial intelligence with implementation of special AI behaviour for specific challenges.

Quantum Rush: Champions will support multiple player profiles, so different people can save their progress and game settings separately on the same PC.

Further details about the game's features will soon be released through our project updates!

If you happen to live in central Europe or just want to have a look at the game (the tutorial and training modes will run smoothly independently of your connection to the server), just create a free account at http://www.quantum-rush.net/ and download the client and you are good to go. Quantum Rush online is currently open beta and will go gold at the end of June. There will not be any account resets between now and then.
< >
349 Comments

Quantum Rush Champions has been Greenlit and is now listed in the Steam store. For the latest information, purchase options, and discussions for Quantum Rush Champions, please see it on the Steam Store or in the Steam Community.
Visit Store Page
For more details Visit Community Hub
For latest discussions
If you really, really want to, you can continue to the Greenlight page. Information on this page may be out of date, since all the action has moved to the areas noted above.