Store Page
Garry's Mod>  Workshop > Bloodclaw's Workshop
This item has been removed from the community because it violates Steam Community & Content Guidelines. It is only visible to you. If you believe your item has been removed by mistake, please contact Steam Support.
This item is incompatible with Garry's Mod. Please see the instructions page for reasons why this item might not work within Garry's Mod.
Current visibility: Hidden
This item will only be visible to you, admins, and anyone marked as a creator.
Current visibility: Friends-only
This item will only be visible in searches to you, your friends, and admins. 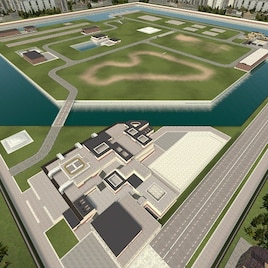 Bloodclaw
Offline
See all 110631 collections (some may be hidden)

This item has been added to your Subscriptions. Some games will require you to relaunch them before the item will be downloaded.
Description
A large building map divided in multiple parts :

- The main island with the spawn room, a lot of flat space to build, some small hills, buildings (including 6 garages and a small city), helicopter landing pad, roads (including large ones for planes), docks and ramp access to water with a few underwater tunnels and an underground building room with an elevator to go to the surface.

- A smaller island in one of the corner of the map with a gm_excess_construct inspired design, including lot of small rooms, two more garages and a dragster racetrack.

- An underground part of the map (accessed using either a teleporter or an elevator) with various ramps, suspension testing and offroad racetrack.

Note : the brush limit and NPC node limit have been reached on this map, no extra content will be added.
Popular Discussions View All (8)

rollanbread May 24 @ 7:29pm
so my doors have error paint on the handles and doors

Name Apr 7 @ 8:09am
Can you reupload this map using the new workshop system? Should significantly decrease the download size

Terrarian Dragon Apr 4 @ 2:06pm
Will this map get an update? I can't run this map anymore without it crashing my game and I would love for it to return.
< >