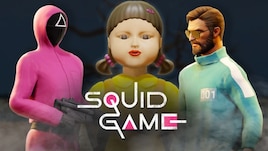 DepoSit
Offline
See all 227 collections (some may be hidden)

This item has been added to your Subscriptions. Some games will require you to relaunch them before the item will be downloaded.
Description
A map based on the South Korean TV-Show "Squid Game". On this map you'll have to overcome six challenges to pass each of which you will need a skill and a little luck.

If you have a problem with the map, just reload it by send mp_restartgame 1 to console

Authors:
DepoSit - location creation
concole_ - creating player models and others
nexus - searching for sounds
Ansimist - map scripts and everything else
Special thanks to Orel and Gabe Follower for their help in translation, advices and making the trailer

If you want to help translate the description and map into your language, then send me a friend request and write in a comment what language you want it translated into.⠀[steamcommunity.com]
Popular Discussions View All (32)

How can I play squid game in csgo i cant find any player in this workshop?
Siawestwood