Store Page
Arma 3 >  Workshop > Meatball's Workshop
This item has been removed from the community because it violates Steam Community & Content Guidelines. It is only visible to you. If you believe your item has been removed by mistake, please contact Steam Support.
This item is incompatible with Arma 3. Please see the instructions page for reasons why this item might not work within Arma 3.
Current visibility: Hidden
This item will only be visible to you, admins, and anyone marked as a creator.
Current visibility: Friends-only
This item will only be visible in searches to you, your friends, and admins. 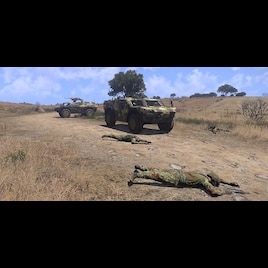 Meatball
Offline
See all 6 collections (some may be hidden)

This item has been added to your Subscriptions. Some games will require you to relaunch them before the item will be downloaded.
Description
This is a COOP/Multiplayer mission and is designed to be launched through the Multiplayer menu, not the Scenario menu. Just open up Multiplayer, start up your server and then select the mission from your list.

"Altis on Fire" is a three episode campaign that follows the events that occur in June and July of 2035 when Altis' attempt to covertly research the technology to develop nuclear weapons leaks to the world. CSAT and NATO forces quickly become entangled in a quagmire on Altis where there is nowhere to hide.

The Altis on Fire Campaign wraps up with Episode 3 - "Rock and a Hard Place" where we take on the role of the remnants of shattered AAF troops attempting to obtain and extract the remaining weaponized nuclear material from Altis while the NATO and CSAT troops wage war around them.

Be sure to check out Episodes 1 and 2 as well!

Features and General Notes:
- AoF missions can be played with 2-10 players, and have multiple parameters available from the role selection screen to adjust game settings including numbers if AI, AI skill level, weather, time of day, and many other options.
- Each mission is unique and has a style all it's own while AI is randomized every time leading to vastly different gameplay from session to session!
- All three AoF missions contain a lot of AI. It is highly suggested you play the mission on a dedicated server with a Headless Client if at all possible. Headless Client support is built directly into all three missions.
- For Best Gameplay, the missions should be played with all map markers turned off and at the "Veteran" or "Expert" difficulty level.
- The missions really shine when the "ACRE" radio mod is used, but it is not a requirement and the missions can be played and enjoyed without it as well.
- Mission specific gameplay information is listed in the "Gameplay Notes" of each mission briefing.
< >
3 Comments

Meatball  [author] Jul 21, 2016 @ 5:22pm
Glad you like it! I think you can rate it with stars up on the top right of the page, but unless enough folks do it, I'm not sure it shows the rating for everyone

I'll admit, it's been a while since I've done any A3 mission editng, so I'm glad it's still working without any issues. If you like this one, you definitely should check out the other two Altis on Fire Missions, "Fallout" and "Force Recon" I've posted up as well. Assuming they still are working well, they're a ton of fun as well.

Meatball  [author] Jun 2, 2014 @ 2:03pm
I've 'fixed'a "No player selected" error in this and the other Altis on Fire missions if someone tries to launch this through the Scenario menu. I say 'fixed' because all of these missions are Multiplayer/COOP missions. They are not single player missions, and should be launched through your Multiplayer menu by selecting "Play" -> "Multiplayer" -> "New" -> Setup your server settings and click "OK" -> Then select "Altis" maps and select the Altis on Fire Mission (It should show up in Orange).

You can load the mission through the Scenario menu, but it will load as a 'singleplayer' mission and stick AI in all the other slots, which may cause issues with the missions.

Additionally, I tacked on the [CO-10] at the end of the mission name so it clarifies that the Altis on Fire missions are COOP/Multiplayer.

I hope that clears up the problem for anyone that might have been having it, and I hope everyone is enjoying it!
< >